You are here: Home / Feature Articles / 38-1: Laws for Your New Land / Categories for Immigration to Canada
Reading Time: 6 minutes 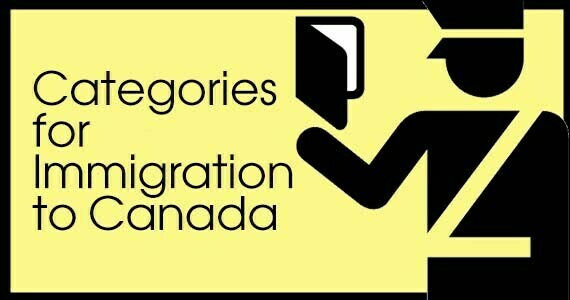 Since 1978, Canada has allowed Canadian citizens or permanent residents to sponsor their relatives to immigrate to Canada.  Family reunification was an important objective of the former Immigration Act and remains so . . .  Of the over 2 million permanent residents admitted to this country between 1997 and 2007, 615,000 (or 27%) are members of the family class.

Canadian immigration legislation dates from 1869, recognizing the important role that immigration has played in the foundation of this country.  Canada’s  immigration law and policy did not always welcome all people.  Some countries’ nationals were barred and others faced selective levies, such as under the Chinese Head Tax and Exclusion Act of 1885.  Today, Canadian immigration continues to be selective, not on ethnic grounds, but on other objectives such as humanitarianism, economic contribution, or family reunification.

This article will briefly describe these three categories of immigration, which is primarily a federal responsibility.  The website of Citizenship and Immigration Canada is an excellent source of more complete and detailed information about immigration to Canada.

Some people have a legitimate fear of persecution in their homeland.  They need to flee to survive or to escape seriously oppressive discrimination.  Examples include political dissidents, those who have fled war at home, or persecuted members of minority religious or ethnic populations.  International conventions cover humanitarian sanctuary for refugees and Canada, like most western industrial nations, accepts and protects thousands of people each year in this way.

Many refugees apply for this status after they have reached Canada.  Some 25,000 persons made  asylum claims from within Canada in  2011.  Those who have been convicted of serious criminal offences, who cannot demonstrate a genuine fear of persecution if returned, who have been refused asylum already or cannot pass a security check will not be admitted.

The federal government works with the United Nations High Commissioner for Refugees (UNHCR), other referral organizations and private sponsors to locate refugees for resettlement in Canada.

Refugees may also be accepted from outside Canada because many genuine refugees will not be able to get to Canada.  The federal government works with the United Nations High Commissioner for Refugees (UNHCR), other referral organizations and private sponsors to locate refugees for resettlement in Canada.  In addition to a generous resettlement program, the government also works with other countries to prevent the development of situations creating refugees. Overall, Canada will accept about 14, 500 refugees this year.

Individual Canadians and groups can also sponsor qualified refugees.  Sponsors provide financial and social support for one year usually, but the sponsorship period can be extended to three years. 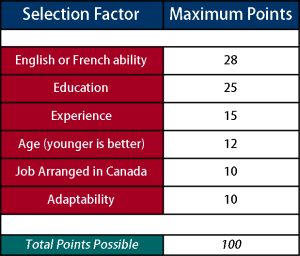 A score of at least 67 points is required to be accepted under this category.  Education, language ability and work experience are verified, medical exams are administered and the immigrants must have enough money to support themselves and dependents in Canada.

Live-in caregivers are given special status in Canada.  These individuals are qualified to care for children, elderly or disabled persons in private homes, where they also live.  After a few years, a caregiver may apply for full permanent immigrant status and may bring family to Canada.

The “Canadian Experience Class” is designed to attract immigrants who have already lived and worked in Canada for at least one year and are otherwise admissible under language, health and security screening.  Temporary foreign workers or foreign students with skilled work experience and are already living in Canada can take advantage of this program.

The final class in the independent economic category is the business immigrant class which seeks to attract investors and business people to Canada who will contribute to job creation and economic development.  Two categories of immigrants under this program are so popular that the immigration department has stopped taking new applications for both until the backlog has cleared.  These are:

A Work Permit “Bridging” System was very recently implemented. Work permits remain valid for 12 months to allow foreign workers to keep their jobs while they await a decision on their permanent residence status.
A new, unique “Start-Up Visa” program matches foreign entrepreneurs with private sector players experienced with start-ups.  “Self-employed persons” is the last class under the economic contribution category for people who have experience in cultural activities, athletics or farm management.

A Work Permit “Bridging” System was very recently implemented.  Work permits remain valid for 12 months to allow foreign workers to keep their jobs while they await a decision on their permanent residence status.

Business immigrants may be nominated by the province in which they plan to settle, which will also facilitate an application.  Quebec is largely in control of its own immigration and does not participate in all of these federal immigration classes.

Since 1978, Canadian immigration legislation has united families through the Family Sponsorship Class.  Sponsors must be over 18, with a good record and must undertake to provide the basic living requirements for those they are sponsoring.  They must have a minimum annual net income of $22,229 per year (slightly less in Quebec).  The purpose of this program is to reunify families without passing on the cost to other Canadians.  If a sponsored relative takes assistance from a federal or provincial government during their sponsorship period, the undertaking renders the sponsor accountable for these benefits.  The sponsor is legally obligated to reimburse the government for any social assistance received during sponsorship.

Since 1978, Canadian immigration legislation has united families through the Family Sponsorship Class. Sponsors must be over 18, with a good record and must undertake to provide the basic living requirements to those they are sponsoring.

In the 2011 case of Canada v. Mavi, (2011) SCC 30, [2011] 2 SCR 504, government demands for payment on eight undertakings for sponsored family members were challenged in the Supreme Court of Canada.  These eight sponsored immigrants accepted social assistance and government support, costs that once incurred, should have been covered by their sponsors.  The eight sponsors denied liability for these costs.  They said the phrase “may by recovered” in section 145.2 of the legislation gave the Crown the discretion to waive their debts.  The Supreme Court unanimously agreed.  It ordered the government to assess each case on its own merits as to whether the undertaking ought to be honoured and how it should be enforced.

Canada continues to re-write its immigration rules to make them more fair, humanitarian and responsive to the changing needs of Canadian society and to streamline its immigration processes.

Kerry Lynn Perry is a Bachelor of Commerce student at the University of Calgary, in Calgary, Alberta.