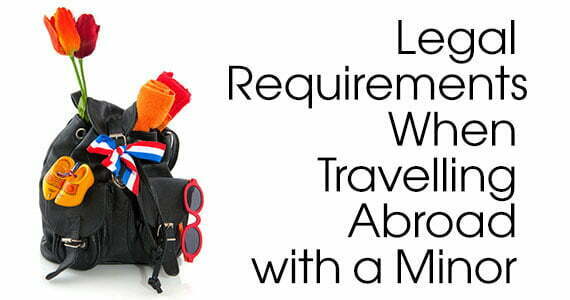 Whether it is summer vacations, winter holidays or visiting relatives for a long weekend, traveling abroad has become common for children of all ages. This travel, however, does not always occur with both parents or with every legal guardian of the minor. In such circumstances, it is highly recommended that if one of the parents or legal guardians is not present at the time of border crossing, they show proof to the border officers that the non-accompanying adults with legal rights over the minor have consented to the international travel.

The first question to be addressed is:  who is considered a minor?  A person is considered a minor if they are under the age of majority and depending on the province, this may be anyone under 18 or 19 years of age. In Alberta, Saskatchewan, Manitoba, Ontario, Quebec and Prince Edward Island, a minor is anyone under the age of 18. In the territories and remaining provinces of British Columbia, Nova Scotia, New Brunswick and Newfoundland,  you are considered a minor until you turn 19 years old.  Immigration officials at airports and border crossing have the authority to prevent a child from entering the country if they are not satisfied that the child’s parents or legal guardians have authorized the travel. So, whether you are traveling with an outspoken teenager or an infant, the recommendations in this article will apply equally to all who are legally considered a minor.

The second question to be addressed is: what will I need, if anything, when travelling abroad with a minor? The Department of Foreign Affairs, Trade and Development strongly recommends that when a minor is travelling with only one parent or guardian , the travelling parent/guardian should have with them a consent letter from the other parent/guardian authorizing  the travel . The consent letter acts as proof to the border officer that the parent or guardian who is not in the presence of the travelling minor is aware of and is agreeing to the child’s  international travel.

In some circumstances, a parent or guardian might not be required to have a consent letter, or it might be impossible for them to obtain one.  First, if the parents are separated or divorced, a court order may already be in place which outlines that a consent letter may not be required if one parent is travelling with the child. In addition to a passport and a consent letter, the Government of Canada recommends that a child travelling with a single parent carries a long form birth certificate. In these circumstances, the accompanying parent or guardian should carry a copy of the court order with them to show to the border officer. It is important, however, to make sure that the travel is in accordance with what has been ordered. For example, if the court order only allows travel to a specific country or for a specific time frame, travelling outside of those criteria would render the court order inapplicable and a consent letter should then be presented.

Second, a parent or guardian may not have contact with the other parent for a prolonged period of time and can’t locate them to obtain authorization to travel. Where a parent cannot be contacted or reached, or if his/her whereabouts are entirely unknown, it is advisable to obtain a court order which reflects these circumstances and gives the parent with custody the ability to travel without requiring the consent of the other parent. This order would in turn be presented to border officials at the time of travel and would eliminate any concerns of whether consent from the other parent is required.

Third, if a child’s parent is deceased, the border officer should be shown a copy of the death certificate.  In the above mentioned scenarios, a consent letter is not required to travel with a child; however, other relevant documents should be presented to the border officer to show that there are no other legal guardians and if there are, his or her consent is not required for the minor to travel.

Whether the child is travelling abroad for a day trip or a two- month vacation, if they are going to be travelling alone or with only one of the parents or legal guardians, in addition to a passport and a long form birth certificate, they should have a consent letter from the non- accompanying parent or guardian.  Immigration officials at airports and border crossing have the authority to prevent a child from entering the country if they are not satisfied that the child’s parents or legal guardians have authorized the travel. Even though there is no legal requirement but only a strong recommendation for a consent letter, having proof of consent from the other parent or guardian will reduce complications during border crossings and facilitate ease of travel.

Magdalena Ganczak is an associate at Duke Law Office in Edmonton, AB.