A Website of The Centre for Public Legal Education Alberta
You are here: Home / Feature Articles / 37-1: Law and Taxes / Credit where Credit is Due: Personal Credits in the Canadian Tax System
Reading Time: 7 minutes 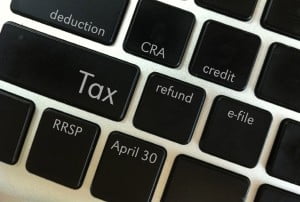 2012 is the 25th year of personal credits in the Canadian tax system. Prior to 1988, personal exemptions were deducted from taxable income. Since 1988, credits against taxes payable have been used. This was perceived as more fair, because the benefit of deductions was greater for higher income taxpayers. Credits result in the same tax benefit for every individual, unless their taxes are insufficient to fully use the credits, because they are not refundable.

Most personal credits apply the lowest federal tax rate (presently 15%) to either a value set by law or actual expenditures. The lowest personal tax rate has declined since 1988, effectively reducing the benefits of these credits. Each province also provides an array of credits, often varying considerably from the federal credits, especially in recent years.

Personal credits have become the popular mechanism for providing new tax benefits to individuals. Recent budgets have featured several new credits for various costs and activities. The 2012 budget was the first in several years to feature no new credits.

A full discussion of all the credits, and the specific rules applicable to them, is beyond the scope of this article. The amounts available for many credits are subject to annual indexation, and the 2011 and 2012 amounts can be found at the Canada Revenue Agency website.

We are Family: Tax credits for families

An array of credits is available for various dependent family members, including:

•    The basic personal amount, available to every Canadian resident individual.

•    The credit for a spouse or common law partner is equal to the basic personal amount, less the spouse’s net income. References to married parties in this article also include parties to a common law relationship. A “common law partner” is defined as a person with whom the taxpayer “cohabits at that time in a conjugal relationship” if the couple either has cohabitated for at least a year, or are natural parents of a child.

In addition to this credit, many credits of one spouse can be transferred to the other, if not needed to eliminate taxes. These include the age, pension, disability and children credits, as well as education-related credits as described elsewhere in this article.

•    An amount for an eligible dependent equal to a spouse credit is available for a child, sibling, parent, grandparent or grandchild if the claimant is either unmarried or separated from their spouse and maintains a “self-contained domestic establishment” where they live and support the dependent

•    A caregiver credit can be available for a child, grandchild, parent, grandparent, brother, sister, aunt, uncle, nephew or niece who is at least age eighteen, and either dependent due to infirmity or, a parent or grandparent, provided the dependent resides with the claimant.

•    The maximum spouse, eligible dependent, child and caregiver amounts are each increased where the dependent is infirm.

•    An infirm dependent credit can be claimed, where the claims discussed above are not available.

Won’t Somebody Think of the Children?: Tax credits for children

Parents can also claim a ”Children’s Fitness Amount” and “Children’s Arts Amount” with respect to up to $500 of costs, for each credit, incurred for each child under the age of 16 (age 18 if eligible for the disability credit) during the year. The criteria are similar, including:

•    programs must run 8 consecutive weeks or a minimum of 5 days;

•    activities must be supervised and suitable for children;

•    fitness activities must contribute to cardio-respiratory endurance and one of muscular strength, muscular endurance, or flexibility and balance; and

•    the arts credit is for “artistic, cultural, recreational or developmental activity”, defined broadly, but specifically excludes physical activities (so the same activity cannot qualify for both credits).

“Enrichment or tutoring in academic subjects” is eligible for the arts credit, an aspect surprising to many parents and therefore often overlooked.

When I get Older: Tax credits for persons over 65

A pension income credit applies on a maximum of $2,000 of pension income. Annuities from a pension plan always qualify. For persons over age 65, the credit also applies if they receive amounts as a consequence of a spouse’s death; annuity payments from a Registered Retirement Savings Plan or Deferred Profit Sharing Plan; or payments from a Registered Retirement Income Fund. The interest component of annuity payments and some life insurance policies also qualify.

An Apple a Day…: Tax credits for medical expenses

There is a credit for medical expenses, to the extent they exceed 3% of net income to a maximum ($2,109 for 2012). Extensive regulation defines eligible medical expenses, which can include travel where services are not available locally, and health insurance, such as out-of-country coverage. Expenses can be claimed for any twelve month period ended in the year, so analyzing receipts to pick the period with the greatest cost can be beneficial. Purely cosmetic procedures are not eligible. Expenses of a married couple and their minor children can be combined. Expenses paid for other dependents can be claimed, but are reduced by 3% of the dependent’s income.

Individuals with a severe and prolonged impairment resulting in a marked restriction in their ability to perform a basic activity of daily living (defined as perceiving, thinking & remembering; feeding or dressing; speaking; hearing; eliminating (bowel or bladder function); and walking) are eligible for a disability credit. An enhancement is available for minor children.

Eligibility for the disability credit requires a T2201 form completed by an appropriate medical practitioner. Where the disabled person has insufficient income to fully use the credit, the excess can be transferred to his or her spouse or a supporting relative. This credit is not available where costs of nursing home care or many forms of attendant care are claimed as a medical expense, often forcing a choice between the two claims.

Get a Job: Tax credits for employees

Employees are eligible for a credit based on their employment income, capped at $1,095 (2012), and their CPP and EI premiums. The self-employed receive credit for the portion of premiums they would have paid as employees.

Get an Education: Tax credits for students

Tuition, and some additional fees, paid to educational institutions for post-secondary education generate a credit provided the student is over 16 years of age. Fees for examinations to obtain professional status, or for licensing or certification, can also be claimed.

A fixed monthly education amount and textbook credit is available, with amounts dependent on whether the student is full-time or part-time. Receipts are not required, and the criteria for both credits are identical.

Unused tuition, education and textbook credits can be carried forward for a future claim. Up to $5,000, less the amount needed to eliminate the student’s taxes, can be transferred to a spouse, or to a parent. This credit interacts with other credits, and students with other tax credits may find these education credits eliminated with no added tax benefit. It is possible to use credits from prior years before using current credits, to preserve as much of the maximum $5,000 transfer amount as possible.

Interest paid under government student loan programs also qualifies for credit, and unused amounts can be carried forward for up to five years.

Give it Away!: Tax credits for donations

Gifts to registered charities, the Crown, universities and municipalities generate a different credit. Credit on the first $200 is at the standard 15% rate, with any excess generating a 29R credit. A donation can be claimed in the year it was made, or any of the five subsequent years.

Generally, donation claims are limited to 75% of the individual’s income. Donations to U.S. charities not registered in Canada can be claimed, to a limit of 75% of income from the U.S. (e.g. dividends on U.S. stocks). Spouses are allowed to claim donations in either spouse’s name.

Where appreciated securities are donated, the general rule is that any capital gains escape taxation. The amount of the charitable donation is not reduced as a consequence of any tax-free gains – the full value of donated securities is eligible for credit.

Contributions to federal and provincial political parties and election candidates are not charitable, but give rise to a political donation credit (separate from personal credits). The federal credit rates are higher than charitable donations (75% of the first $400, 50% of the next $350 and 1/3 of the next $525), but these contributions are limited to modest amounts. Provincial credits are generally similar.

The Odd Men Out: Tax credits in other areas

Most tax discussions break issues into categories, one of which is always “other” or “miscellaneous” for items not fitting into neat categories. Here are some examples.

A volunteer performing 200+ hours of firefighting services (including responding to fires, being on call, attending fire department meetings, and training) receive a fixed credit (worth $450 of tax). The fire chief is required to certify eligibility.

The cost of public transit passes, generally limited to monthly periods (weekly and per trip passes accounting for a month or more can qualify) generates a tax credit. Receipts, including the pass, are required. Passes for the taxpayer, their spouse and children under age 19 may be claimed.

A first-time homebuyer is eligible for a fixed credit ($750 of tax relief). This can be shared between co-owners. Each claimant must be on title under the provincial land titles registration system.

A credit for home renovations was a one-time opportunity in 2009, the only temporary credit in the 25 year history of the credit system.

While tax relief is always welcome, one might question the effectiveness of some of these credits. For example, the Children’s Fitness and Arts Credits have generated numerous questions to the Canada Revenue Agency (CRA) regarding qualifying programs, and the cost of requesting and reviewing receipts is considerable, especially compared to a maximum tax benefit of $150 per year for most children. Fixed amounts such as the first time homebuyer’s and volunteer firefighter’s credits, while perhaps less equitable in not scaling with actual costs, carry a much lower administrative burden.

An annual review of Schedule 1, the federal form for personal credits, can help ensure that all relevant credits are identified. The guidebooks produced by the CRA generally provide additional details of these provisions.