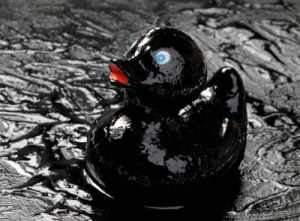 Syncrude Canada Ltd, formed as a joint venture, is currently one of the earliest and largest producers of crude oil from Canada’s oil sands. The consortium was initially formed in 1964 to mine oil from the Athabasca oil sands.  It operates a large oil sand mine, utilities plant, bitumen extraction plant and upgrading facility that processes bitumen and produces value-added light, sweet crude oil for domestic consumption and export.  Syncrude’s production accounts for about 15% of Canada’s consumption.

In July 2000, Syncrude started depositing tailings in the Aurora Settling Basin located around 75 kilometres north of Fort MacMurray, Alberta. This pond occupies a huge area of about 640 football fields.  Transported through pipes from the extraction plant to the pond, the tailings, formed mainly by water, sand and bitumen, are left in the pond until reclamation.  When masses of bitumen  accumulate on the surface of the pond, they form a tar – a thick, cohesive and viscous bitumen.

The Aurora tailings pond did not receive environmental approval until June 2007.  According to the approval, that same year Syncrude submitted its first Waterfowl Protection Plan for the Aurora mine, undertaking  to monitor and deter access of wildlife (especially birds) from the tailings pond.  The Plan proposed using an eight-person Bird and Environmental Team (BET) to provide full coverage, as well as 67 scare cannons, 27 effigies, 17 rafts and 13 boats.

Syncrude did not establish a proper system to ensure that wildlife would not be contaminated by the pond, and did not take reasonable steps to ensure the effective operation of such a system.The Athabasca river region and the Aurora Settling Basin tailings pond are on an important route for migratory birds during breeding season. Migratory birds are prone to mistaking tailing ponds as natural bodies of water. Most species of waterfowl depend on water for rest and foraging stopovers, and are attracted to open waters because the vegetation around them acts as a breeding ground.

Since the 1970s, major oil sands operators, including Syncrude, have invested heavily in research, protocols, and equipment to discourage birds from landing in or near the toxic water.  They face marked challenges to bird deterrence due to various factors such as the high volume of migratory birds passing through the region, and the fact that tailings ponds tend to thaw early, causing the artificial ponds to become preferential landing sites during the early spring break up in April and May.  At that time, the migration of  birds is at its peak and the unfrozen natural water body  makes tailings ponds the only open sources available for birds.  This impact was especially significant in spring of 2008 as the break-up of ice on nearby water bodies did not occur until early May.

At 9 a.m. on April 28, 2008 Robert Colson, a heavy equipment operator, noticed a large number of dead waterfowl floating on the surface of Syncrude’s Aurora tailings ponds.  After he counted about “300 lumps”, he reported the incident to his supervisor.  Meanwhile, Todd Powell, a senior biologist with the provincial government had come upon the same scene and was trying to contact Syncrude’s wildlife officer, but he could not reach her.  He called his colleagues at Alberta Sustainable Resources and Environment instead.  Dave Mathews, the leader of Syncrude’s Birds and Ecology Team (BET) called the provincial regulators to confirm the serious bird problem on Syncrude property.

If birds land on the tailings ponds and are contaminated by oil, their feathers will no longer be able to keep them warm and enable them to fly.  A heavily oiled bird will almost certainly die.The protection and deterrent systems had failed.  The birds were trapped within the floating bitumen in the pond, which pulled the birds down and they eventually sank.  What was initially reported to be about 500 dead ducks on Syncrude’s tailing ponds soon turned out to be about 1600.<

In 2008, the oil sands industry was one of the largest and fastest growing industries in Canada.  Located primarily in northern Alberta, the oil sands reserves are approximately 173 billion barrels of recoverable crude. This quantity is second only to Saudi Arabia and is capable of meeting Canada’s oil needs for the next 500 years.

There are currently three large oil sands mining operations in Alberta run by Syncrude Canada Limited, Suncor Energy and Albian Sands. Among them, Syncrude is the largest one by production of crude oil.  Syncrude operates outside Fort MacMurray in the Athabasca Oil Sands, 440 kilometres northeast of Edmonton, Alberta (see diagram).

Oil sands in Alberta are extracted from the earth in essentially one of these two methods: in-situ extraction and open-pit mining.  In open pit mining, massive open-pit mines are constructed, along with associated extraction facilities to separate the bitumen from the sand by breaking it down and mixing it with water so that it can be pumped easier.  After the ore is excavated from the ground, warm water is added to wash the thick and sticky bitumen off the sand and clay.  The water and solids that remain at the “tail end” of the bitumen extraction process are referred to as tailings.

What was initially reported to be about 500 dead ducks on Syncrude’s tailing ponds soon turned out to be about 1600.Owing to their composition, tailings are very toxic. At high concentrations, salts and naphthenic acids would potentially affect fish and other aquatic life.  Over time, small amounts of tailings water will seep from the coarse sands and possibly pollute the groundwater.   Small amounts of diluents and bitumen found in tailings can form patches of oil on the surface of tailings ponds. If birds land on the tailings ponds and are contaminated by oil, their feathers will no longer be able to keep them warm and enable them to fly.  A heavily oiled bird will almost certainly die. The bitumen mat found on April 28, 2008, covered a significant portion of the basin’s surface and was described as being “several inches thick, viscous and cohesive with the consistency of frothy roofing tar.”

Syncrude was charged with failing to store a hazardous substance in a manner that ensured that it did not come into contact with any animals, contrary to Alberta’s Environmental Protection and Enhancement Act, section 155, and with depositing a substance harmful to migratory birds in an area frequented by migratory birds, contrary to Canada’s Migratory Birds Convention Act, section 5.1(1). 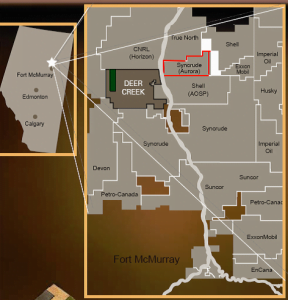 On June 25, 2010, after an eight-week trial, a judge of the Provincial Court of Alberta rendered guilty verdicts on both charges. The Court determined that the oil sands operator failed to establish the defence of due diligence.  While it was impossible ensure waterfowl would not land on the tailings pond, the probability could have been significantly reduced.  Syncrude did not establish a proper system to ensure that wildlife would not be contaminated by the pond, and did not take reasonable steps to ensure the effective operation of such a system.

While Syncrude had a bird deterrent system, it had deficiencies.  Employees had documented a decline in the company’s resources dedicated to bird deterrence.   They had no formal training in dealing with bird behaviour or deterrence, there were too few staff and they were not equipped with the latest technology.

“Full weekly coverage’ was only implemented Monday through Thursday, and the deployment of deterrence methods did not commence until April 14, 2008.  Syncrude’s Plan for 67 cannons was too few, the functioning ones were wrongly installed, and they were not deployed along the perimeter of the basin before the birds were discovered. By contrast, two of Syncrude’s competitors, Shell and Suncor set up their deterrence programs at least two weeks earlier than Syncrude, and both companies’ land cannons were in place before April 8.

Proper written documentation and procedures were not in place at Syncrude.   Industry and government data collection, systematic monitoring and research on bird landing, oiling and mortality rates on the tailings pond all fell short, which led to ineffective deterrent methods.

Syncrude was found to have handled and stored harmful substances and failed to establish proper precautions and protective mechanisms to prevent the contamination of wildlife. The Company did not act with all the due care and diligence that were required to prevent this disaster.

When masses of bitumen  accumulate on the surface of the pond, they form a tar – a thick, cohesive and viscous bitumen.he judge imposed a total $3,000,000 penalty.  This included the maximum provincial fine of $500,000 and the maximum federal fine of $300,000.  Some of the fine went to the Wildlife Management Technician Diploma Program at Keyano College in Fort MacMurray.  $1.3 million went to the University of Alberta for research into migratory birds and deterrence technology (the Avian Project).  A further $900,000 was used for a wetlands conservation project on 60 acres near North Cooking Lake, a key stopover point for migratory birds.  The Alberta Conservation Association used the money to acquire land for the Golden Ranches Waterfowl Habitat Project.

While Syncrude’s sentence is not the largest penalty ever imposed in Canada for an environmental offence, it did serve as an impetus toward higher penalties and the increased use of creative sentencing.This case was highly publicized on local, national, and international levels.  Although certain environmental damage may be unavoidable, companies in extractive industries face a high legal responsibility to mitigate risk and damage.

There are two ironic postscripts to this story.  Mere days after the judge sentenced Syncrude to this $3 million penalty in late October 2010, another 230 birds died in Syncrude’s Mildred Lake tailings pond. And, in the United States, as of December 2013, a new federal rule permits wind energy companies selected by the federal government to allow their large turbine blades to kill bald and golden eagles, free of prosecution, for 30 years in the name of green energy.