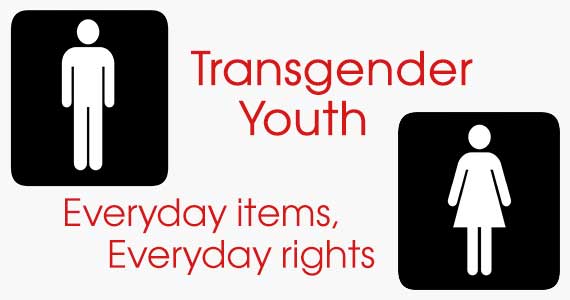 The public bathroom can be a major source of anxiety for transgender youth. Using a public restroom may result in their status being discovered. If they identify as transgender and have not yet revealed their identity, they may feel like an imposter. Worse yet, trans teens may be subject to ridicule, abuse or assault, physical or sexual, in public lavatories. Issues concerning use of the restroom may be the first notice that a school receives that a child is transgender.

– Which Way to the Restroom? Respecting the rights of transgender youth in the school system

The task of protecting transgender youth in schools has begun. A topic that ten years ago was rarely discussed is now at the forefront of policy-making in many school boards across the country. The job of protecting transgender youth has not been easy and is still in the beginning stages, but it is a source of endless debate and discussion, which means it is on the radar of those who care for youth.

In schools, the discussion has centered around harassment, gendered washrooms and change rooms, segregated sports, dress codes, names and pronouns. Looking at this list, it is easy to see that much of it is a list of details; everyday items that make up a person’s day: getting dressed, going to the bathroom, changing for gym, having your friends call you by name, and playing on a sports team. Part of the reason that transgender youth are fighting task by task is because a youth, for the most part, cannot have surgery to live in their identified gender. Some laws and policies depend on the occurrence of gender reassignment surgery and say that a person must have had some surgery that reflects the identified-gender in order to obtain particular rights. For a youth, this option is not possible and so they fight the battle of details. Their rights cannot stem from the fact that they have proof of surgery or proof of gender on an identification document. This is not to downplay the complexities of gaining rights for transgender adults, but instead to highlight the struggles for youth.

One of the legal debates has been: when does the law accept transgender persons as being the gender that they identify? Some laws and policies depend on the occurrence of gender reassignment surgery and say that a person must have had some surgery that reflects the identified-gender in order to obtain particular rights. More recently some rights have been permitted to transgender people who self-identify their gender. Policies protecting transgender youth cannot depend on the status of surgery, and so have often allowed for self-identification to obtain rights, such as participating on a particular gendered sports team.

Schools are faced with the issue of addressing how to accommodate a transgender youth who wants to use the bathroom or change room that matches their identified gender. Different school boards have used different standards.

The Edmonton Public School Board Policy on Sexual Orientation and Gender Identity HFA.AR asks school staff to be sensitive to the needs and privacy of transgender youth when determining restroom accessibility. It calls for “individual solutions” and mentions finding a solution that does not disrupt the school. …even school boards without a policy will still have human rights obligations toward transgender students.

The Vancouver School Board Policy Code ACB-R-1 assesses the accommodation of a transgender student using washrooms and change rooms “…with the goals of maximizing the student’s social integration, ensuring the student’s safety and comfort, minimizing stigmatization and providing equal opportunity to participate in physical education classes and sports.” It says that transgender students shall be able to use the washroom and change room for their identified gender.

Toronto District School Board’s Guidelines for the Accommodation of Transgender and Gender Non-Conforming Students and Staff goes a step further by clearly stating: “Requiring students to ‘prove’ their gender (by requiring a doctor’s letter, identity documents, etc.) is not acceptable. A student’s self-identification is the sole measure of the student’s gender.”

Some of these policies reference the transgender student’s self-identification as the standard upon which to allow the student to use a washroom that corresponds with their gender. Part of the reason that transgender youth are fighting task by task is because a youth, for the most part, cannot have surgery to live in their identified gender.  For instance, Toronto’s policy is the most clear in using the student’s self-identification as the sole gauge of gender. Other policies, such as Edmonton’s,  discusses the student’s identity as transgender in the opening paragraph, but in the clause on restrooms looks more toward “individual solutions”, respect and safety. This language of “individual solutions” is in line with human rights law on accommodating a student (or anyone for that matter). When looking for an accommodation, the school is legally bound to look for a solution on a case-by-case basis and to not rely on a one-size-fits-all rule.

School boards such as those in Edmonton, Vancouver and Nova Scotia, have included in their policies that schools must reduce or eliminate gender-segregated activities. Many policies specify that staff should aim toward accommodating transgender youth according to their gender identity in these activities.

The school board policies in Vancouver, Edmonton, Toronto and Nova Scotia all stress safety and openness to the student participating in the gym class or sports team that corresponds to their gender identity. Each policy notes that excluding transgender youth from physical education is not an option. The debate on the issue of sports runs deeper than these policies are able to address in over-arching statements. In the adult world, the desire of a transgender person to play on a single-gender team that corresponds with their gender identity can create controversy. Some of this controversy has been abated. In 2004, the International Olympic Committee adopted a policy whereby transgender people may compete in the Olympic Games if they: have had gender reassignment surgery, are legally recognized and have had two years of hormone therapy. Many sports oriented organizations have followed suit.

The Transgender Law & Policy Institute, an American based organization, published Guidelines for Creating Policies for Transgender Children in Recreational Sports in September 2009. The school board policies in Vancouver, Edmonton, Toronto and Nova Scotia all stress safety and openness to the student participating in the gym class or sports team that corresponds to their gender identity. These Guidelines state that the debates that may cause problems in the adult sporting world are focused on the competitive advantage that male hormones may provide in sports. However, “[i]n preadolescent children… hormonal levels do not differ significantly between the sexes. Therefore, no hormonally-based advantage or disadvantage between girls and boys exist.”

Not every school board in every province and territory has a policy on transgender youth. Some places are creating policies around sports. Some school boards have yet to create a general policy for transgender youth. Every school board would be bound by human rights laws, within their area, that protect students based on gender identity, gender or sex. And therefore, even school boards without a policy will still have human rights obligations toward transgender students. What many of those rights are has yet to be heard by tribunals and courts. Therefore, students may find it difficult to decipher what rights they are entitled to without a policy, and to obtain those rights in a timely manner.

The policies that I reviewed acknowledged that each situation must be addressed on a case-by-case basis. This is the very nature of accommodation – looking at each case individually and finding solutions that would reasonably accommodate a transgender youth. Legal cases providing direction on these issues are few and far between and there are no cases addressing bathrooms or change rooms that have made it to a higher court (for instance, Ferris v Office and Technical Employees Union, Local 15 [1999] BCHRTD No 55 is a tribunal decision regarding the use of the woman’s bathroom by a transgender woman in her workplace). Any case law that does address transgender complainants usually involves adults. Therefore, schools are left to interpret the law as it relates to human rights and apply it to the situation of gender identity.