A Website of The Centre for Public Legal Education Alberta
You are here: Home / Special Report / 37-4: Helping Yourself / Doin’ It Your Own Way… Unsuccessful Succession
Reading Time: 3 minutes 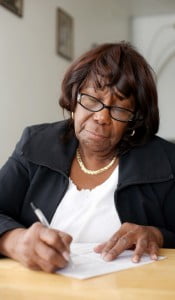 This is the age of the YouTube video. Want to know how to build Ikea furniture, bake a soufflé, change the oil in your car? YouTube can help. We are geared to thinking that we can do anything for ourselves and so, of course, many are led to thinking that they can do their own Wills. “How hard can that be?” they say. “Let’s just get some forms off the Internet”.

When I am asked if people can do their own Wills I always reply that, of course, they can. Everyone can attempt to do their own legal work. The question is really, “How much trouble will occur if someone prepares his or her own Will?” There is a chance that no trouble will occur. However, there is also a chance that the estate of the do-it-yourselfer, will end up in litigation and then all the legal fees that have been saved by trying to be their own lawyer will be eaten up tenfold by the legal fees to sort out the mess.

A Will is valid if it is typewritten and the person who made the Will and two witnesses sign it in front of each other. In some provinces, a Will is also valid if it is entirely in the person’s own handwriting and they date it and sign it. The problem arises in what is written above the signature. If it cannot be deciphered because the wording is awkward or if there are ambiguities, these cannot be ignored. They must be determined and usually that is done in court. One significant factor in court cases about Wills is that often a problem is only discovered after the maker of the Will has died. After the death, the Will is read and cryptic remarks the maker made are discovered, but there is no opportunity to ask them what they meant. Not even a good séance will help. Therefore, in Wills litigation it is often said that in interpreting the Will the “best” witness is always dead … because the best witness is the person who made the Will.

So you might ask, what kind of troubling comments made in a Will could lead to problems? There are many cases involving problems. One example is a woman who wrote “Be sure to give something to the little ones”. Of course, now we have a problem of determining what is “something” and who are the “little ones”. In that case there were several people who claimed that the deceased called them a “little one”. We will never really know what she wanted but we do know that a large amount of her estate was spent sorting out this little ditty.

In another case a farmer relied on his accountants and lawyers to incorporate and transfer his land into his corporation. He listened but he never really understood that that meant that he no longer personally owned the land and, instead, he owned shares in his corporation. He wrote his own Will and gave specific pieces of valuable land to certain individuals and then gave the residue of his estate to other people. The court found that he could not give away the land in the Will because he did not own it and thus, the people who inherited the residue inherited the company shares and the company with all the land in it. This is probably not what the farmer wanted, but again, we will never know. We do know that a lot of money was spent in litigation fighting about it.

Your Will is an important legal document that determines who inherits your property. It will be pivotal in determining if your children will get together for Christmas the year after you die. It is penny wise and pound foolish to make your own Will. The cost of a lawyer to prepare your Will is a small fraction of what it will cost to litigate your Will after you die. Lawyers might make a lot more money litigating your Will than they ever would preparing it.

Of course you can prepare your own Will but if your goal is successful succession, happy families and no litigation then you will seek expert advice on that all important document called your Will.

Doris Bonora is a partner with Fraser Milner Casgrain LLP and head of the Wills and Estates Practice Group. She can be reached at Doris.Bonora@fmc-law.com.