You are here: Home / Sections / Famous Cases / When Free Trade is Not Free: the Abitibi Case
Reading Time: 6 minutes

We will not give away our valuable timber and water resources to a company that does not honour its historic commitments … [w]e will, therefore, today introduce a bill to ensure these valuable natural resources are returned to their rightful owners – the people of Newfoundland and Labrador.

The legislation, which is without precedent in Canada, and is reminiscent of decrees emanating from jurisdictions with less democratic traditions, shocks common sensibility.

The North American Free Trade Agreement (NAFTA) came into effect on January 1, 1994 between Canada, Mexico, and the United States.  It purports to “promote conditions of fair competition in the free trade area”, “increase . . . investment opportunities in the territories of the parties”, and “facilitate the cross–border movement of goods and services between the territories of the parties” [Article 102 (1)(a)–(f)].

Not only do trade barriers among these three countries remain, NAFTA also regulates government contracts, intellectual property and investments.  One of the most serious rules is that no government may expropriate assets of a company from another member country.  Article 1110 of NAFTA is labeled “Expropriation and Compensation”.  It says “no Party may directly or indirectly nationalize or expropriate an investment of an investor of another Party in its territory or take a measure tantamount to nationalization or expropriation of such an investment” unless it is on a non-discriminatory basis for a public purpose in accordance with due process of law and is accompanied by payment of fair compensation.

This article describes the recent Abitibi case in Newfoundland.

AbitibiBowater Inc. (Abitibi), a U.S.-based global forest giant incorporated in Delaware, had operated several mills throughout Newfoundland and Labrador (Newfoundland) from the early 1900s. In 2005, Abitibi closed its Stephenville mill.  Three years later, it announced plans to end 800 jobs and shutter the Grand Falls-Windsor mill, its last in the province.  For Abitibi to cease operations which began more than a century earlier was the final straw for Newfoundland Premier Danny Williams.

Less than two weeks later, on a cool, gray day before Christmas 2008, Premier Williams stood in the legislature to speak in support of Bill 75, the Abitibi-Consolidated Rights and Assets Act (ACRAA). This new legislation was read, debated and enacted within about two hours.  All political parties voted for it.  It authorized the province to expropriate Abitibi’s assets in the province, without compensation.

Abitibi, one of the largest pulp and paper companies in the world, immediately decried this new law as “arbitrary, discriminatory and illegal under international law.”  Abitibi’s CEO dispatched a letter to the Premier denouncing ACRAA as “an entirely unfounded and unscrupulous attack” on Abitibi that was “unequivocally . . . illegal” under NAFTA.  He attached the applicable NAFTA provisions to his letter.  The company threatened that if a satisfactory resolution was not reached, it would make a claim under NAFTA.

Premier Williams declared, “Abitibi has reneged on the bargain struck between it and the province [in 1905] over the industrial development of the province’s timber and water resources for the benefit of the residents of the province.  We cannot as a government allow a company that no longer operates in this province to maintain ownership of our resources.”  The Premier said Abitibi breached its legal obligations to operate a mill in the province. 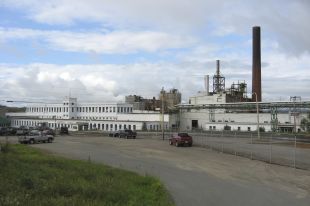 However, Abitibi’s last mill at Grand Falls-Windsor was hemorrhaging money from high operating costs and low pulp demand, one result of widespread use of the Internet.  The paper mill that had built the town, and was a key contributor to the region’s economy, was now one of the most unprofitable of its kind in North America.  After months of negotiations between the mill’s union and Abitibi, no restructuring agreement could be reached on wages and benefits.  Management had warned the community that this was coming in mid-August 2008, but waited until early December to announce the mill would be closed by March 31, 2009.

Apart from the pulp and paper plant, Abitibi still retained numerous property rights and assets in Newfoundland which comprised well over $300 million in value.  In addition to the plant, this included interests in hydroelectric facilities, water and surface rights, and timber rights, all of which the company planned to retain and work.  Suddenly, ACRAA stripped the company of all its assets without compensation.

The province pressed on with ACRAA.  The holdings of Abitibi – not only the pulp and paper plant but all of Abitibi’s hydroelectricity and timber rights in Newfoundland – were placed under the control of a provincial Crown corporation. This new legislation was read, debated and enacted within about two hours.  All political parties voted for it.  It authorized the province to expropriate Abitibi’s assets in the province, without compensation. The Premier reiterated Abitibi’s mill closure justified the expropriation of its assets: “We will not give away our valuable timber and water resources to a company that does not honour its historic commitments.”

For this, and other actions on his province’s resources, the Premier was nicknamed Danny Chavez, an unflattering reference to the Venezuelan socialist leader.  In addition to the free trade challenge, commentators, policy-makers and economists issued ominous warnings that businesses would flee the province and future investment would decline precipitously.

On February 12, 2009, Abitibi’s Grand Falls-Windsor paper mill filled its last order and closed.  On April 16, 2009, four months to the day after the expropriatory ACRAA was enacted, Abitibi filed for bankruptcy protection in both the U.S. and Canada to buy time and opportunity to find some acceptable plan of debt repayment to creditors.  The company was short of cash and struggled to come up with severance owed to its former employees.

One week later, Abitibi filed its intent to submit a claim to arbitration under the NAFTA anti-expropriation provisions.  Abitibi’s formal claim on February 25, 2010 demanded $500 million against the Government of Canada for permitting Newfoundland to expropriate its assets without compensation.

Outcome of the NAFTA Claim

The Government of Canada agreed with Abitibi that the Newfoundland expropriation was illegal and the country and the company soon entered into settlement negotiations.  On August 24, 2010, it announced that it had settled with Abitibi for $130 million, “for the benefit of Canada’s long-term economic interests”.  It added “[i]n reaching this agreement, the Government of Canada is avoiding potentially long and costly legal proceedings.”  This settlement constituted the largest expropriation payout ever made by any North American government.

There were many critics of the large settlement.  Many were disgruntled by the notion that the federal government, via Canadian taxpayers, had to pick up the tab for the illegal actions of a testy, grandstanding Premier and an inattentive opposition.  Prime Minister Harper promised not to recover this sum from Newfoundland.

What Happened to the Parties?

The people of Canada paid $130 million to Abitibi, even though they had no part in the expropriation.  Free trade is not so free after all.

Premier Danny Williams left politics on December 3, 2010 about two years after this Abitibi debacle, and around the time the settlement was paid.  His departure did not end the fallout from this expropriation.  Newfoundland found itself saddled with massive environmental cleanup costs on the expropriated Abitibi property.  The company’s insolvency in the United States and Canada stayed its liabilities.  Newfoundland took the issue of who was responsible for clean-up to court, arguing Abitibi was responsible for these costs even though it was protected by the insolvency status.  This matter went to the Supreme Court of Canada which decided that Newfoundland had to pay for the clean-up (Newfoundland and Labrador v. AbitibiBowater Inc., [2012] 3 SCR 443) along with the costs of the protracted litigation.

Abitibi emerged from bankruptcy and creditor protection in Canada and the United States on December 9, 2010.  It is currently incorporated in Québec under the name of Resolute Forest Products.  It operates in pulp and paper, wood products, woodlands, recycling and sustainable energy.

NAFTA continues in force with other regions and continents following this lead by negotiating free trade agreements of their own.  Recently, Canada inked a comprehensive free trade agreement with the European Union.  Ironically, two Newfoundland ministers travelled to Ottawa to warn European ambassadors that Newfoundland will not comply with this new trade deal unless the Canadian government pays hundreds of millions of dollars they say is owed by Canada relating to another matter.