You are here: Home / Feature Articles / 38-1: Laws for Your New Land / Who is Family? A Look at Canadian and U.S. Immigration Law on the Definition of Qualifying Relatives
Reading Time: 6 minutes 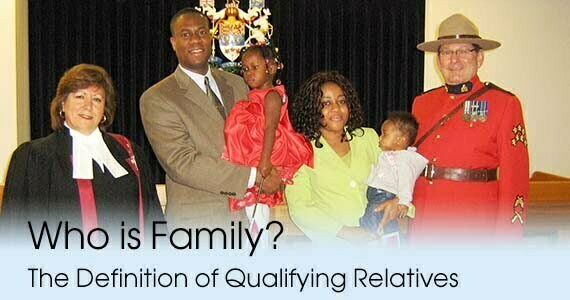 In 1979, the American disco group, Sister Sledge, sang, “We Are Family. I got all my sisters with me.” By contrast, under both Canadian and U.S. immigration law, determining who is a family member that can achieve an immigration status based upon a family relationship can prove challenging. The immigration law in both countries has evolved significantly in this respect, and also been the subject of shifting interpretations by the relevant federal immigration agencies. This article highlights some of the major factors with particular focus on Canadian family immigration law.

Who counts as “family” for immigration to Canada?

Family reunification is one of the main objectives of Canadian immigration policy. This foundational principle: “to see that families are reunited in Canada”,  is enshrined in law as one of the stated purposes of Canada’s Immigration and Refugee Protection Act (IRPA).  Nevertheless, the list of relatives who are included as members of the “family class” for immigration to Canada has fluctuated with societal norms and government economic policy.

Nowadays Canadian citizens and permanent residents (PRs) can sponsor the immigration of their spouse (husband or wife), common-law partner, conjugal partner, dependent children and parents or grandparents to Canada.  This has not always been the case.  When IRPA became law on June 28, 2002, the family class was formally expanded to include common-law and conjugal partners, including partners of the same sex.  In the decade prior, Canada processed applications from same-sex and common-law partners of Canadians and PRs as economic, rather than family, class immigrants on humanitarian and compassionate grounds.

A common-law relationship is recognized by Canadian law once a couple has cohabited in a marriage-like relationship for at least one year.  The conjugal partner immigration category was created in recognition that the mandatory cohabitation requirement is impossible in some situations, especially for same-sex couples or for couples of different nationalities, and allows sponsors to support the immigration of a partner living outside of Canada with whom the sponsor has been in a serious committed relationship for at least a year.  Following the introduction of IRPA in 2002 Canada became a nation of choice for many bi-national same-sex couples.

Family class immigration applications from spouses, common-law or conjugal partners and dependent children are given the highest priority, ahead of parents and grandparents.  These priorities are controlled by quotas, targets, and more recently by temporary pauses on the acceptance of new applications in certain categories.  In the past, an unlimited number of sponsorship applications were accepted for parents and grandparents such that the backlog for this category grew to over 160,000 applications (and processing wait times of eight years).  To deal with the backlog (and concerns that many applicants might not live to see their application processed), Citizenship and Immigration Canada (CIC) temporarily stopped accepting new sponsorship applications for parents and grandparents in November 2011 to focus on those already in the queue.  A substantial dent has been made in the backlog and CIC recently announced that the parent and grandparent program will reopen in January 2014.  Only 5,000 applications will be accepted next year.
Proposed regulatory amendments will decrease the maximum age of dependent children to 18 for all immigration programs to Canada. The full-time student provision is also being abolished.

Foreign nationals who immigrate to Canada can bring their dependent children.  In 2002, the eligibility age of a dependent child increased from 19 to 22.  Currently, unmarried children (and those not in a common-law relationship) under the age of 22 are considered dependents for immigration purposes.  Children who are 22 or older, but who are continuously enrolled in school full-time, or who are physically or mentally unable to be financially self-supporting are also considered dependents.  This is about to change.  Proposed regulatory amendments will decrease the maximum age of dependent children to 18 for all immigration programs to Canada.  The full-time student provision is also being abolished.  These changes are expected to come into force on January 1, 2014.  This proposal is attracting much criticism from those who claim it will split families and force many parents to permanently say goodbye to 19-year-old children.

Who counts as “family” for immigration to the United States?

Under the current immigration law, “immediate relatives,” defined as spouses, parents, and adults (over 21 years of age) children of U.S. citizens receive the most preferential treatment, as no quotas apply to the number that can be sponsored each year in the interest of family reunification.

In a major change, the United States Supreme Court just struck down The Defense of Marriage Act (DOMA). This forced U.S. Citizenship and Immigration Services (CIS) to abandon its long-standing position that same-sex marriages were not valid for U.S. immigration purposes.

By contrast, adult children of U.S. citizens, the siblings of U.S. citizens, and spouses and minor children of permanent residents are subjected to lengthy waits to achieve permanent resident status under the quota system.  The definition of child includes biological children, stepchildren and adopted children that meet certain criteria.  In a major change, the United States Supreme Court just struck down The Defense of Marriage Act (DOMA). This forced U.S. Citizenship and Immigration Services (CIS) to abandon its long-standing position that same sex marriages were not valid for U.S. immigration purposes. CIS had apparently been anticipating this possibility because it has already begun to approve permanent residence cases filed by same-sex spouses and overturn past denials issued on that basis.

How does Canadian law facilitate inter-country adoption from an immigration perspective?

First generation biological children born to Canadians abroad are Canadian by descent.  They simply need to obtain a citizenship certificate to confirm their Canadian nationality.  The same is often true for children adopted from another country by a Canadian parent.  Other adoptive parents must first sponsor their adoptive child’s immigration to Canada.  Even where an adoptive parent is eligible to receive a direct grant of citizenship for an adoptive child, there may be reasons to choose the immigration process instead.  For example, adoptive children from some countries would lose their foreign nationality by becoming Canadian.  And subject to some exceptions, the first-generation limit on citizenship by descent will apply to an internationally adoptive person’s children (if they are born outside of Canada) unless the adoptee obtains citizenship by way of naturalization.

The United States implemented the Hague Convention on Adoption effective on April 1, 2008, and U.S. citizens who wish to adopt orphan children residing abroad must navigate a process that involves authorized adoption agencies, state governmental agencies, the U.S. Citizenship and Immigration Services, the U.S. Department of State and, of course, the foreign government of which the foreign child is a citizen.  U.S. citizens habitually resident in the U.S. may not file relative petitions on behalf of foreign children resident in a Hague Convention country after that date, but must exclusively follow the Hague protocol.  In the United States, most adoptive parents retain the services of a properly registered adoption agency that is supposed to have the capability to steer them through the Hague protocol, but there are some instances where, especially during the early years after the U.S. adopted the Hague Convention, agencies did not follow the procedures. This resulted in great anguish on the part of families that encountered immigration problems.

Economic / Employment Cases — Who can I bring to Canada with me?

Dependent children, spouses and common-law partners are considered dependents of individuals applying to immigrate to Canada temporarily (as workers or students) or permanently.  Except in the case of some low-skilled workers, these relatives can all accompany their family member to Canada.  Stepchildren and adopted children can also accompany their parents to Canada provided adequate supporting documentation is adduced to confirm that any other parent consents to the stepchild moving to Canada, or the genuineness of the adoption.  As an incentive to encourage highly-skilled foreign workers and foreign students to come to Canada, their spouses are eligible for “open” spousal work permits that authorize almost any type of employment in Canada.

Foreign nationals who secure U.S. work visas or achieve U.S. permanent resident can include spouses and children under the age of 21 (including stepchildren and properly adopted children) in their immigration cases.  Due to the recent U.S. Supreme Court decision, this includes same-sex spouses for the first time.  U.S. immigration law does not recognize “common law” spouses.  The DOMA decision does not change that. In some work visa categories, the spouse can apply for an employment authorization document – in others this is not possible although the spouse may independently qualify for work authorization.

Immigrants heading to Canada and the United States would be well-advised to depart from the declarative certainty of Sister Sledge and make sure that before embarking on their immigration voyage that they know which family members they can bring with them.

Andrea Baldwin is a business immigration lawyer with Stewart McKelvey. She is based in Halifax, Nova Scotia and represents clients across Canada. She can be reached here.