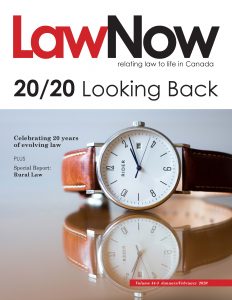 The beginning of a new year is a time to reflect on the past. In this issue, we’re looking back at important changes to the law over the last 20 years. We also report on the state of the law in rural communities.

ENVIRONMENT | The Crown’s Duty to Consult
Jeff Surtees
The Haida Nation decision provided a framework for consultation where claims for Aboriginal rights and title had been made but not yet decided.

HUMAN RIGHTS | Access to Justice Given a Boost by Downtown Eastside Sex Workers Case
Linda McKay-Panos
The Supreme Court of Canada adapted the rule on public interest standing, resulting in potential for better access to justice.

Promoting the Practice of Law in Rural, Regional & Remote Communities
Tonya Lambert
There is an access to justice crisis developing in rural, remote and regional communities across the country.

Crime in Rural Alberta
Dave Pettitt and Jessica Steingard
Rural crime is a problem in Alberta. How can we prevent and respond to it? And what does the law say about trespassers?