You are here: Home / Benchpress / A New Danger for the Urban Forest
Reading Time: 4 minutes 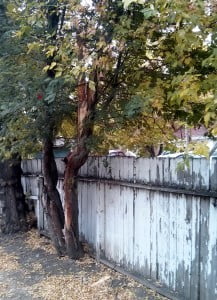 LawNow received this article response from one of the lawyers involved in a recent cases that was featured in a Bench Press post called A Tree Grows in… Toronto?

A new danger has been added to the many challenges facing the urban forest in Ontario. It arises from an unexpected source – the law itself. A recent decision in the Superior Court of Justice cast aside what was previously thought to be the conventional wisdom relating to the law on boundary trees and on nuisance.

The main effect of the decision is that trees can now become the common property of adjoining landowners, whether or not they want it or consent to it. A tree can now become common property simply because it grows too large. At the same time, the rights of a landowner to cut the branches or roots of a neighbour’s tree that cross over the boundary line face new restrictions. Unfortunately, as set out below, the decision actually provides an incentive to landowners to cut down or damage trees in order to avoid these consequences.

For many years, the law was clear. If your neighbours’ tree grew large enough that its trunk – measured at ground level – eventually crossed over the boundary line, it nonetheless remained their tree and you had no property rights in it. However, you were entitled to cut the branches or roots of the tree that crossed over the boundary line, even if it put the tree at risk. The branches or roots were considered in law to be a nuisance that you were entitled to remove from your property.

As a result of the recent decision, there are some big changes. A “boundary tree” now means any tree whose “trunk” (as defined by arborists) – measured at or above or below ground level – crosses over the boundary line, regardless of which side of the boundary line the tree was planted or started growing. Any such tree is now common property, whether or not the adjoining landowner wants it or consents.

As soon as any part of the trunk of your neighbour’s tree crosses over the boundary line, there is a change of ownership and you own the tree in common with your neighbour. At the same time, you lose the right to cut the branches and roots that cross over onto your property – the tree is now common property and any dealing with it requires consent.

In short, your neighbour’s tree “grows” from being a nuisance that you are entitled to cut back, if you wish, to being property that the law deems you to own in common with your neighbour!

For the law to impose common property ownership on neighbours is not good public policy. Issues relating to tree maintenance, division of expenses, risk management, liability insurance, perhaps even land title rights, must be resolved on consent of the common owners. Otherwise, they must be determined by the Courts. At present, there are no guidelines to assist the Courts in resolving any of those disputes.

This decision means that there are many more commonly owned trees. It also means that you may need to hire both an arborist and a surveyor to determine whether the “trunk” crosses the boundary line at or above or below ground level and whether the tree has now become common property.

The decision also has serious implications for municipalities and for their Tree Protection By-Laws. For municipalities, there are new burdens. They have lost sole ownership of many “street trees” that are near boundary lines, and have now acquired common ownership of many more trees that are near boundary lines and were once considered to be privately owned. To the extent that their Tree Protection By-Laws are in conflict with this decision, their By-Laws may now be deemed to be without any legal effect.

Some people who claim to be environmentalists have characterized the decision as a “landmark decision on the environment” and one that “protects private trees in Ontario”. It is not. For the law to impose on adjoining landowners common ownership of a tree, whether or not they consent, does not preserve or protect a single tree. It simply means that neither owner can do anything at all with the tree – even basic maintenance – unless the other owner consents.

The decision is under appeal. The Court of Appeal for Ontario will decide whether or not the decision should stand.

About John A. Howlett
The Centre for Public Legal Education respectfully acknowledges that we are located on Treaty 4, 6, 7, 8 and 10 territories, the traditional lands of First Nations, Métis, and Inuit.