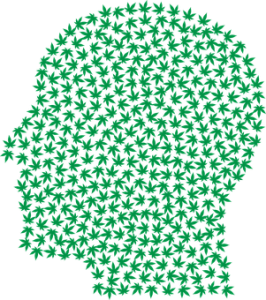 On October 17, 2018, recreational use of cannabis became legal in Canada. Canadians are now able to purchase recreational cannabis, publicly possess up to 30 grams of dried cannabis and grow up to 4 plants for personal use. Does this mean that Canadians can obtain and use cannabis anywhere they want then? Nope, think again.

Cannabis use among tenants and condominium residents and the difficulty in enforcing “no smoking” rules or bylaws are already common complaints among landlords and condominium boards. With the new recreational cannabis regime, provinces can implement additional rules for possession, use and cultivation of recreational cannabis. For example, in Alberta, individuals must be 18 years old or older to purchase or consume cannabis. Municipalities can also impose additional bylaws and land use and zoning laws to restrict where cannabis is sold and where it can be used.

While there is no legislation in Alberta that prohibits cannabis use or cultivation in homes, landlords, property owners and rental companies may restrict cannabis use, cultivation and/or smoke in tenancy agreements. Likewise, condominium boards are also free to enact bylaws and rules restricting cannabis use, cultivation and/or smoke on their properties and common areas.
In other words, home owners can use recreational cannabis within their own homes or backyard and grow up to four plants on their properties as long as their municipality allows  it.   Tenant or condominium residents, you may likely encounter some form of restrictions through your landlord, rental company or condominium board on cannabis use and cultivation. For example, some landlords in Alberta have already banned cannabis smoking and cultivation in rental units, whereas some landlords allow cultivation and consumption of edibles in units despite a smoking and vaping ban. Tenants should review their leases and condominium residents should review their condominium’s bylaws and rules for further information on any restrictions.

When it comes to restrictions in public spaces, the province’s Bill 26 (An Act to Control and Regulate Cannabis) prohibits smoking and vaping cannabis in certain places frequented by children such as:

Tenant or condominium residents, you may likely encounter some form of restrictions through your landlord, rental company or condominium board on cannabis use and cultivation. Municipalities in Alberta also have additional bylaws and/or land use and zoning laws restricting where cannabis can be sold and used. For example, cannabis stores in Edmonton must be at least 200 meters away from another cannabis store, 200 meters away from schools and public libraries and 100 meters away from provincial health care facilities, public parks and public recreation facilities. In Edmonton, there are additional places where smoking of cannabis is not allowed, for example, in city owned golf courses, on patios or within 10 metres of a bus stop, doorway, window or air intake of a building. However, there are some public places where smoking of cannabis is allowed in Edmonton, for example, at designated areas at festivals and public events and in some parks and trails (as long as they do not contain children’s amenities). 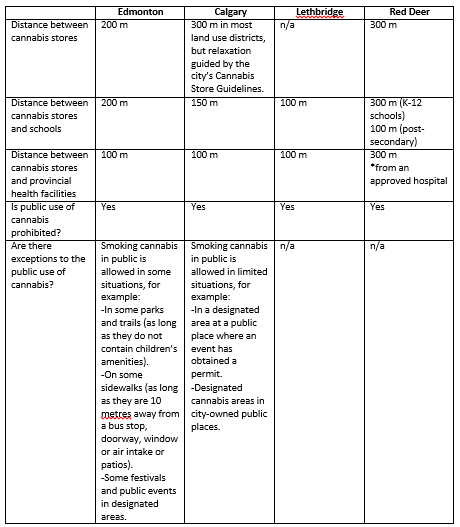 Municipalities in Alberta also have additional bylaws and/or land use and zoning laws restricting where cannabis can be sold and used. Cannabis use among tenants and condominium residents and the difficulty in enforcing “no smoking” rules or bylaws are already common complaints among landlords and condominium boards. Some lawyers have suggested that an overall ban on recreational cannabis would be an effective solution, while others have raised issues about the enforceability of such bans and how they will hold up to existing tobacco smoking restrictions. There is also the issue of medicinal cannabis users and how they would be accommodated by landlords and condominium boards. Furthermore, it has been pointed out that cannabis cultivation in a property may affect insurance policies and premiums.