A Website of The Centre for Public Legal Education Alberta
You are here: Home / Feature Articles / 37-3: Constitutions / Bills of Rights in Canada
Reading Time: 7 minutes 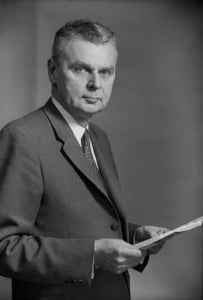 The Canadian Bill of Rights was enacted by Prime Minister John Diefenbaker’s
government on August 10, 1960.

When Canadians think of human rights law, the Charter of Rights and Freedoms and their provincial human rights Acts are most likely to come to mind. These are the best known and most important human rights instruments. But what is a Bill of Rights and how is that different from these other two human rights statutes with similar sounding names?

What’s in a Name: Bill of Rights Versus Human Rights Act (or Code)?

So today, the federal government and Alberta have both Bills of Rights and Human Rights Acts. Other provinces and territories have combined both Bill and Act provisions into a one-stop Human Rights Act (or Code).

What is the difference in nomenclature? A Bill of Rights normally contains only rights and freedoms extended or guaranteed by the Crown. These are the types of rights and freedoms that only the public authority can truly ensure, including the rights to liberty and to vote in elections, and the freedoms of religion, speech, assembly, association and the media. The Alberta Bill of Rights is reproduced in full below in the Appendix. It is brief and imposes limits on the Alberta legislature only.

Individuals do not have any obligations under a Bill of Rights – they only have rights. The emphasis in these Bills of Rights is human-ness, so corporations are unlikely to avail themselves of these rights (which is not the case under the Charter where the encompassing legal term “person” is used). Enforcement of Bill rights and freedoms is always against government which explains why court is where one obtains a remedy (eg. to strike down legislation). The Bill of Rights model is closely reflected in the Canadian Charter of Rights and Freedoms of 1982. The Canadian Charter of Rights is also exclusively concerned with government action.

A Human Rights Act, by contrast, generally confers the one major right of equality (or non-discrimination) and extends this particular right completely through to the private sector. This is the most recent and controversial extension of human rights. Therefore, residential landlords, employers, professions and businesses generally must grant equality to all those individuals who would do business with them. Private parties such as businesses have no ability to ensure one has the right to vote in elections and they even cannot guarantee free speech, so their sole legal obligation in human rights is to treat their tenants, employees or customers (as the case may be) with equality. This is monitored by reference to specific “prohibited grounds of discrimination” such as religion, gender, race, disability, etc.

In the end, therefore, all Canadian governments have legislated restraint of themselves from interfering with individual freedoms and they have extended similar basic human rights. They all have also restricted the private sector from discriminating against individuals on the basis of enumerated attributes. Two jurisdictions (federal and Alberta) continue to separate these public and private dimensions by maintaining both a Bill and an Act. The other jurisdictions combine them in one piece of human rights legislation, variably called an Act, Code or Charter.

The 1960 Canadian Bill of Rights was almost entirely reproduced in similar or broader language in the 1982 Canadian Charter of Rights and Freedoms. There are only three provisions in the Bill that were not included in the Charter: freedom against arbitrary exile of any person [section 2(a)], the right to “enjoyment of property and the right not to be deprived thereof except by due process of law” [section 1(a)], and the right “to a fair hearing in accordance with the principles of fundamental justice for the determination of his rights and obligations” [section 2(e)].

Section 6 Charter mobility rights replace protections from arbitrary exile. The Charter contains no guarantee of a fair procedure or fair compensation for expropriation of property, akin to the Bill’s “enjoyment of property” right. The Charter’s protection of “life, liberty and security of the person” also seems narrower than the Bill’s section 2(e) which might extend to economic rights. The right to “enjoyment of property” is the only provision in the Alberta Bill of Rights not covered by the Charter.

The federal and Alberta Bills of Rights continue in force alongside the Charter. Their continuing value, therefore, is that they add to Charter rights in these limited ways. Ironically, the Supreme Court of Canada seems to have breathed more life into the Canadian Bill of Rights after the Charter than it granted before 1982. For example, in the 1985 case of Singh v. Minister of Employment and Immigration the Supreme Court agreed that the Bill’s section 2(e) extended farther than the Charter’s section 7.

The Canadian Bill of Rights and the Alberta Bill of Rights remain as the only two stand-alone Bills of Rights in Canada. These ordinary statutes purport to limit government control over individuals’ lives. All other jurisdictions combine this self-limiting legislation with equality rights enforceable against the private sector in broader human rights Acts or Codes (Charter in Quebec). The federal and Alberta governments also enforce equivalent human rights statutes in their respective private sectors. The Supreme Court of Canada has said that all regular human rights legislation enjoys a “quasi-constitutional” status.

The merely statutory (ie. not constitutional) human rights Bills and Acts and the constitutionally-entrenched Canadian Charter of Rights and Freedoms share similar origins, purposes and language. It is not surprising, therefore, that they overlap to a considerable extent. Yet, there are still some interesting differences in scope and content. In numerous small ways, the provincial legislation actually reaches farther and is more generous than the Canadian Charter in conferring human rights and freedoms.

Quebec’s Charter of human rights and freedoms RSQ c-12 is distinctly broader than the other Bills of Rights, and human rights Acts and Codes – it includes a number of social and economic rights as well. These additional provisions of Quebec’s Charter continue to play significantly into case law. An example is the section 5 right to individual privacy: “[e]very person has a right to respect for his private life.” In this way, the Quebec Charter supplements the Canadian Charter.

These quasi-constitutional Bills, Acts and Codes of human rights in Canada all serve to ensure equality in the private sector. They may, in modest ways, also extend human rights beyond what is available from the Canadian Charter of Rights.

WHEREAS the free and democratic society existing in Alberta is founded on principles that acknowledge the supremacy of God and on principles, fostered by tradition, that honour and respect human rights and fundamental freedoms and the dignity and worth of the human person;

WHEREAS the Parliament of Canada, being desirous of enshrining certain principles and the human rights and fundamental freedoms derived from them, enacted the Canadian Bill of Rights in order to ensure the protection of those rights and freedoms in Canada in matters coming within its legislative authority; and

WHEREAS the Legislature of Alberta, affirming those principles and recognizing the need to ensure the protection of those rights and freedoms in Alberta in matters coming within its legislative authority, desires to enact an Alberta Bill of Rights;

THEREFORE HER MAJESTY, by and with the advice and consent of the Legislative Assembly of Alberta, enacts as follows:

Recognition and declaration of rights and freedoms

1 I t is hereby recognized and declared that in Alberta there exist without discrimination by reason of race, national origin, colour, religion or sex, the following human rights and fundamental freedoms, namely

(a) the right of the individual to liberty, security of the person and enjoyment of property, and the right not to be deprived thereof except by due process of law;

(b) the right of the individual to equality before the law and the protection of the law;

(e) freedom of assembly and association;

2 Every law of Alberta shall, unless it is expressly declared by an Act of the Legislature that it operates notwithstanding the Alberta Bill of Rights, be so construed and applied as not to abrogate, abridge or infringe or to authorize the abrogation, abridgment or infringement of any of the rights or freedoms herein recognized and declared.

3 (1) Nothing in this Act shall be construed to abrogate or abridge any human right or fundamental freedom not enumerated herein that may have existed in Alberta at the commencement of this Act.

(3) The provisions of this Act shall be construed as extending only to matters coming within the legislative authority of the Legislature of Alberta.

4 (1) If in any action or other proceeding a question arises as to whether any law of Alberta abrogates, abridges or infringes, or authorizes the abrogation, abridgment or infringement, of any of the rights and freedoms herein recognized and declared, no adjudication on that question is valid unless notice has been given to the Minister of Justice and Attorney General.

(2) When the Minister of Justice and Attorney General has notice under subsection (1), the Minister may, in person or by counsel, appear and participate in that action or proceeding on such terms and conditions as the court, person or body conducting the proceeding may consider just.