You are here: Home / Special Report / 43-1: Colours of the Law / Colours and Trade-Marks
Reading Time: 6 minutes 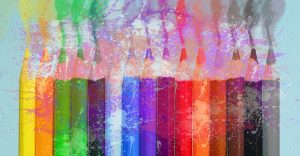 We live in a world of colour. From the brightest shade of red to the darkest hue of violet, colours can influence your mood, evoke your emotions, and even establish certain mental connections. A bouquet of red roses may make you think of romance and Valentine’s Day, while the same bouquet in a sharp white could instantly trigger thoughts of churches and weddings. The colour yellow may evoke thoughts of sunshine and spring time. And seeing a bright purple wrapper on the shelf of your local grocery store may make you think of….chocolate? Or at least that’s what Cadbury, with its signature purple wrappers on its candy products, is hoping to accomplish.

Indeed, Cadbury is hardly alone in using colour as part of its branding efforts. Producers have long recognized the power of colour to create instant recognition for their products. UPS has branded all of its trucks and uniforms with a particular shade of brown. Mattel consistently uses hot pink for all of its Barbie products. Tiffany’s uses its signature robin’s egg blue (Pantone #1837 to be exact) in association with the majority of its products. But what, if any, protection does trade-mark law afford a producer over its signature colours? This article will provide a brief overview of the history of trade-mark law as it relates to colours, as well as the impact of proposed changes to the Canadian Trade-marks Act.

An Overview of Trade-marks

To begin with, it’s useful to define trade-marks generally. Trade-marks are “marks” that are used to distinguish the wares or services of one provider from those of another. They generally serve the dual purpose of allowing a consumer to know where their goods or services are coming from, while allowing producers to accumulate goodwill. Put more simply, trade-marks are the words, phrases or logos that producers use to help consumers identify their goods or services.

The most famous examples of trade-marks are the names and logos which we encounter on a daily basis, such as the name “Coca-Cola”, McDonald’s golden arch logo, Starbucks green mermaid logo, or Google’s colourful wordmark. Slogans like “Just Do It” for Nike and “Eat Fresh” for Subway similarly qualify for trade-mark protection. Trade-mark law also protects the shape of containers in which goods are protected (i.e. a “distinguishing guise”), such as the shape of the Coca-Cola bottle.

Over the last several decades, however, trade-mark law has begun to afford protection to more obscure forms of marks, including scents and sounds. Thus, Metro Goldwyn Mayer was successful in registering a trade-mark for the sound of the lion’s roar which is heard at the outset of most MGM films. More recently, Hasbro successfully registered a US trade-mark for the smell of Play-Doh, which it describes as “a sweet, slightly musky, vanilla fragrance, with slight overtones of cherry, combined with the smell of a salted, wheat-based dough.”

Regardless of its form, a registered trade-mark affords the mark holder a variety of fundamental rights. Arguably the most important of these is the right to prevent others from offering their goods or services under a mark which is confusingly similar. Thus, for example, a shoe provider could not sell shoes using a logo which is similar enough to the Nike checkmark so as to cause a potential purchaser to think that the shoes were produced by Nike.

Colours can often play a significant part in a trade-mark (seeing the Facebook logo in any colour other than blue, or the Home Depot logo in green rather than orange, would immediately strike an observer as incorrect). The use of colour as a component of a trade-mark is not contentious. Moreover, combinations of colours that form graphics and logos also serve as valid trade-marks.

A more interesting question is whether a single colour can serve as a trade-mark in and of itself. In Canada, the law on this issue is unclear. The case-law does suggest that a colour applied to a particular size and shape of object, such as the colour green applied to a particular shape of pharmaceutical tablet, can serve a valid trade-mark. By contrast, a colour cannot in and of itself be registrable as a trade-mark. Thus, while Tiffany’s would be able to register its iconic blue as applied to jewelry boxes, a trade-mark for the colour itself may not be valid.

Foreign jurisdictions have tended to be more generous towards colour marks. In the United States, for example, the insulation company Owens-Corning launched a “Think Pink” campaign in the 1980’s for its pink fiberglass building insulation. As part of this campaign, Owens-Corning attempted to register a trade-mark which would prevent its competitors from using the colour pink in association with insulation products. This registration was ultimately confirmed by the Federal Circuit Court of Appeals. A decade later, in 1995, the Qualitex Company registered a US trade-mark for the special green-gold colour it had used on pads for dry-cleaning presses. When Qualitex brought an action for infringement of this trade-mark against one of its competitors, this action ultimately worked its way to the top of the US court system, where Supreme Court ultimately ruled that a trade-mark that consists “purely and simply, of a color” is registrable. Similarly, in 2006, the European Court of Justice acknowledged that a single colour was potentially registrable as a trade-mark in Libertel Groep BV v Benelux-Merkenbureau.

More recently, in 2008, Christian Laboutin, S.A., successfully registered a US trade-mark for the colour red applied to the outsole of a shoe. Three years later, in 2011, Laboutin filed a trade-mark infringement lawsuit against Yves Saint Laurent, when the latter began selling red monochrome footwear. The 2nd U.S. Circuit Court of Appeals ultimately held that the red-sole was a sufficiently distinctive symbol that qualifies for trade-mark protection, but only when contrasted with a different color used for the other visible portions of the shoe. Thus, Yves Saint Laurent’s monochrome red shoes were found not to infringe, and Louboutin’s mark was allowed to survive, albeit with a narrower scope.

Changes to the Canadian Trade-Marks Act

While the historical Canadian perspective appears quite restrictive on colour trade-marks, changes to the Trade-marks Act (expected to come into force in early 2019) will be expanding the definition of a “trade-mark” to include, among other things, colours. This appears to open the door to the registration of a trade-mark that consists purely of a single colour. However, registration of such marks will be subject to a pair of restrictions.

First, any colour mark will need to be distinctive. Since colours are not inherently distinctive (no one looks at a shade of blue and says “wow, I’ve never seen anything like that before!!”), an applicant will need to be able to establish that the colour has become distinctive through use. Thus, while Tiffany’s will likely be able to rely on its previous use of robin’s egg blue to establish the colour as distinctive, a small company would not be able to register a trade-mark for a colour they have not previously used in the marketplace

Second, a producer will not be able to register a colour if the features of the colour are primarily functional. Examples of this can be seen in foreign jurisprudence. For example, in the United States, registration of the colours orange and yellow for public telephones and telephone booths was rejected, because it was determined that these colours provide better visibility under any lighting condition. Similarly, the colour coral was found not to be registrable for earplugs, because this colour makes earplugs easier to see in safety checks.

When registered, a colour will function in much the same way as any other trade-mark, preventing others from using confusingly similar marks. Thus, while Tiffany’s may be able to preclude its competitors from using the colour of robin’s egg blue in association with jewelry, they likely would not be able to preclude the use of that colour in association with automobiles.

The coming amendments to the Trade-Marks Act likely come as good news to companies who have an established history of using a particular colour in association with their or services, as they will likely be able to obtain even broader protection for these marks. Some may argue that this expansion is a positive thing, as it may serve to bring Canada more in line with international standards, and will provide further protection to ensure consumers are not deceived in the marketplace. Others may argue that increasing protection for colours comes at a cost, as it may serve to diminish the limited number of desirable colours available within an industry.

The true implications of the coming changes to Canadian Trade-Mark law will likely take some time to determine, as jurisprudence will be needed to define the scope of the new legislation. Thus, anyone wishing that trade-mark law was more black and white may soon be disappointed, as Canadian trade-mark law is about to be exposed to a whole new world of colour!

Francisco Marquez-Stricker is Legal Counsel at the University of Alberta’s Research Services Offices.