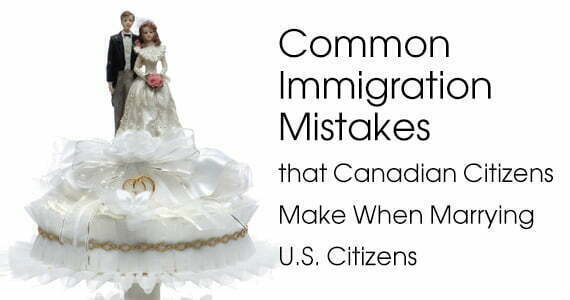 In 1970 the iconic Canadian rock band, The Guess Who, released their hit single, American Woman. In it, they warned fellow Canadians, “American woman, stay away from me.” Despite their plea, countless Canadian citizens have found love across the Southern border. Each year, large numbers of Canadians marry U.S. citizens and a significant portion of these cross-border couples opt to build their lives in the United States rather than Canada.

A portion of our practice involves counseling U.S. citizens who wish to marry or have married foreign nationals and seek to secure permanent resident status for them in the United States. There are a number of things that Canadian citizens can do to make the process more difficult for themselves. This article explores some of the major ones.

1. Invite 200 Guests to the U.S. wedding, make nonrefundable deposits on the wedding hall, mail invitations, book the honeymoon outside the U.S., and then start exploring how the immigration process works a few months before the wedding.

“Surely you must be joking!” is the common refrain we hear once we describe the normal timeframe for issuance of a K-1 visa. The period from initial filing of the K-1 petition with U.S. Citizenship and Immigration Services (CIS) to issuance of the K-1 visa at the U.S. Embassy in Montreal (which processes all K-1 visas in Canada) often ranges from five to nine months.

Couples are frustrated to learn that even attorneys cannot predict exactly how long the process will take due to ever-fluctuating government processing times for the various stages involved. Expedited requests are rarely granted. For do-it-yourself couples, there may be an increased possibility that the U.S. government will make additional evidentiary requests that can delay any of the stages.

“What do you mean my fiancé may not be able to visit me in the in the U.S. while the petition is pending!?!” If you thought that applying for a fiancé visa would not impact entry to the U.S. as a visitor, think again. While most Canadians enjoy easy access to the U.S. as a visitor, a pending K-1 petition shifts the scales against an applicant for entry. U.S. Customs and Border Protection (CBP) officers can see the K-1 petition in the CBP computer system and may conclude that the Canadian citizen lacks requisite nonimmigrant (temporary) intent to enter the U.S. prior to receipt of a K-1 visa. CBP can deny entry to such visitors. Many K-1 beneficiaries, especially students, the unemployed and retirees may be unable to visit the U.S. while a K-1 petition is pending.

“How do they expect us to plan our wedding under these circumstances?” Because it is impossible to know with certainty when the K-1 visa will be issued, making marriage plans is difficult. The K-1 visa allows for one entry lasting up to 90 days in which to marry. Therefore, prior to visa issuance, many couples are unable to plan a large wedding a few months before the K-1 applicant’s arrival. Many opt for a small civil ceremony shortly after arrival which meets the legal requirement of marrying within 90 days of entry in K-1 visa status, and later have a reception that constitutes the usual spiritual or religious celebration. Wedding-hall insurance is advisable.

“But I just put a non-refundable deposit payment down on our dream all-inclusive vacation in Mexico!” Once the Canadian citizen enters the United States in K-1 status and marries the U.S. citizen within 90 days of arrival, he or she must apply for permanent resident status within that time frame via a process called “adjustment of status.” An application for an employment and travel authorization card should be included. The K-1 visa holder may not travel abroad until the earlier of an issuance of this card or a grant of permanent residence. Issuance of the card often takes 60 to 90 days and can be delayed if CIS requests further evidence. If the Canadian citizen applies for permanent residence, and then departs the U.S. without the card or a grant of permanent residence, CIS may deny the adjustment application. The considerable filing fees will be lost and it may take nine months or longer for the Canadian citizen to re-enter the U.S. on an immigrant visa. The K-3 visa “shortcut” typically does not save any time. So it is best to plan the initial honeymoon in the U.S. and avoid cruises that traverse international waters.

2. We are young, we feast on love, and we don’t need jobs at this point…

“Why don’t they get that it’s About Love and Not About Money?” Many U.S. citizens are shocked to learn that there is a financial support requirement that attaches to sponsoring their Canadian citizen fiancée for a K-1 visa and permanent resident status. With regard to the K-1 process, K-1 applicants must prove that they will not have to rely on public benefits upon U.S. arrival. With regard to the permanent residence process, the U.S. citizen must sign a legally binding affidavit of support, submit copies of U.S. tax returns, and prove current and continuing income that meets the threshold specified by a government schedule. Certain types of assets can be substituted for income. If the U.S. citizen lacks the necessary finances, in some instances the Canadian citizen’s assets can be factored in, or a relative or other qualifying individual domiciled in the U.S. can be a joint sponsor. The financial sponsorship obligation survives divorce. Couples should examine whether they will have the necessary income or assets to merit K-1 visa issuance and permanent resident status.

3. We love each other, we’re getting married, and Canadians are private, not Kardashians, so why submit paper about it?

“Why do they suspect my marriage of being a sham?” Under the U.S. immigration law, petitioners have the burden of proving that they have met their fiancés, the relationship is bona fide and the resultant marriage is legitimate and not entered into solely to confer permanent resident status upon the foreign national beneficiary. U.S. immigration officers understandably are suspicious because they regularly uncover instances of immigration fraud perpetrated by both criminal rings and individuals – U.S. immigration is particularly wary of large differentials in age, race, and economic status. Relationships born online and persons who have met and courted very briefly also can draw suspicion. So even though your relationship is a romance for the ages, you have the burden of proof. The key is to collect and retain all evidence of your relationship. If you met online, you should save proof of your emails, Skype chats, your subsequent in-person meetings such as plane tickets, photos, and receipts from hotels. It is also wise to keep phone records, proof of family having met your loved one and their involvement in the wedding plans, newspaper announcements of the engagement, and the like. Put yourself in the shoes of a skeptical U.S. immigration officer and document your case to the hilt.

4. I wasn’t arrested; I got a discharge, so why even list it on the forms, since they’ll just make a big deal out of it?

We all make mistakes, but the biggest one you can make is to fail to acknowledge yours to the U.S. immigration authorities; even if you think they may only be minor traffic violations or the crime was expunged. We commonly see problems where Canadians fail to disclose driving while intoxicated or marijuana discharges. Further, foreign nationals are often surprised that what they thought was a long-ago warning or dismissal is on their record that the U.S. government data-mines. The U.S. government’s definition of an “arrest” or “conviction” is shockingly broad and encompasses even certain warnings and discharges. If you have ever been stopped by law enforcement or issued a citation, you should consult with an immigration attorney prior to applying for any immigration benefit. Ignorance of U.S. immigration law is not a defence. Failure to disclose an arrest or conviction can result in permanent bars to any U.S. immigration benefit.

5. The immigration stuff is complicated, so she’ll just come in to marry me on a visitor entry, or we’ll marry in Canada and then she’ll just move in and we’ll file for permanent residence here.

U.S. immigration law contains a strong distinction between immigrant (permanent) and nonimmigrant (temporary) intent. A Canadian citizen who intends to immigrate to the U.S. and enters the U.S. in a visitor status may become the subject of fraud charges which can lead to a denial of the permanent residence application without the grant of a discretionary waiver.

As reflected by the lyrics of The Guess Who, a Canadian citizen’s failure to plan for the immigration timeframes and issues in advance of marrying a U.S. citizen is “gonna mess your mind.” We recommend starting such planning at least a year prior to the wedding if possible.

Christopher M. Pogue is an immigration lawyer with Hammond Law Group LLC, a Cincinnati, Ohio firm that exclusively practices immigration law. He can be reached at www.hammondlawgroup.com.