A Website of The Centre for Public Legal Education Alberta
You are here: Home / Feature Articles / 22-4: Dangerous Things / Home Sweet Home…or is it?
Reading Time: 8 minutes 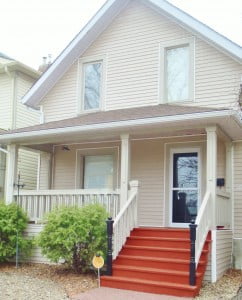 Imagine you have just finished building your dream home, complete with swimming pool and hot-tub. You and your family, including the family dog, have just moved in. You decide to have a house warming party and invite over several dozen of your closest friends. Sounds like fun, right? Wrong! While it can be fun and entertaining to host your friends, that situation can change quickly if someone has an accident at your home and gets hurt. Your house can be fraught with potential civil liability if someone is hurt on your premises.

Liability of a homeowner for people injured on her premises is typically classified as occupier’s liability law. Some Canadian provinces have enacted legislation to deal with occupier’s liability, while some provinces only have the common law. In the common law – law which has slowly developed over time through judges’ interpretation of past cases – an occupier of land owed a duty to people who entered upon her premises. An occupier does not necessarily mean the owner of the property, but is the person in control or possession of the land. The person who had possession of the property was responsible for harm that fell upon visitors. So for example, a tenant could potentially be liable to visitors to the premises, but the landlord would not typically be liable since the landlord is no longer in control of the land.

The duty owed by the occupier to the visitor, however, depended upon the status of that visitor. At one end of the spectrum, an occupier had a low duty to trespassers to the premises. Hidden traps could not be placed for trespassers, but obvious deterrents, such as barbed wire on top of a chain link fence, could be employed. Accidental, and even negligent, injury inflicted upon a trespasser by the occupier gave the trespasser no right to sue the occupier.

A potentially higher duty was owed to a paid entrant under a contract with the occupier. A classic example is a spectator who pays to see a sporting event. In such a circumstance, the duty owed by the occupier to the visitor was defined by the terms of the contract between the two parties. In the absence of a contractual term, however, there was no obligation with respect to safety.

Clearly, under the common law, the duty of an occupier to take care for the safety of a visitor is rather complex with many legal issues. With all other facts being equal, liability may exist in some situations and not in other situations, depending upon the classification of the visitor.

The duty owed by the occupier to a visitor applies not only to the condition of the land such as holes in the ground and other obstacles, but also to activities carried out on the land and the conduct of any other people that the occupier has allowed onto the premises. This does not, however, make the occupier an insurer for the visitor’s safety. An occupier is not required to take care to prevent injury to a visitor for risks that the visitor has voluntarily accepted.

The Alberta Occupier’s Liability Act also codifies the duty owed by an occupier to a trespasser. No duty is owed to a trespasser unless the occupier’s conduct is willful or reckless, such a placing hidden traps. The exception is where the trespasser is a child. An occupier has a duty to take reasonable steps to ensure that a child is safe when the occupier ought to reasonably suspect that a child may trespass on the premises. An example might be a jungle gym or swimming pool, which might be enticing to neighbourhood children.

For invited guests, such as those at a house warming party, a strong duty is owed by the homeowner to care for his or her guests. While a lot of people think they are very careful, or may think that their houses are brand new and could not have any problems, there are literally hundreds of accidents that happen every day in homes across the country. If the accident happens to an invited guest, and the injuries are serious, a homeowner could find himself faced with a lawsuit.

For example, winters are a fact of life in Canada, and so is the ice and snow that accompany them. In the past, the courts have held homeowners liable for a slippery walkway or driveway where a guest slipped and fell, even where the guest had a l ready walked across the slippery area before. While every such case will be determined upon its particular circumstances, the courts seem loath to accept the argument that pedestrians should always expect icy conditions in winter in Canada, and therefore should be taking better care for their own safety. Accordingly, a homeowner may wish to take reasonable steps to protect party guests on his or her property, such as regularly shoveling walkways and driveways, as well as regularly salting or sanding slippery areas, particularly when guests are expected. Some of the factors which the courts have examined in the past to determine liability have been the homeowner’s knowledge of the icy conditions, the pedestrian’s knowledge of the icy conditions, the frequency of salting or sanding, whether or not the pedestrian used available handrails or other objects to steady himself, whether the pedestrian had appropriate winter footwear, the lighting in the area, and whether or not the pedestrian was paying attention to where he was going or what he was doing.

Winter is not the only time, however, when a homeowner faces risk when guests come over. Although the pool season is short in many parts of Canada, it is nonetheless a popular past-time. Unfortunately, however, pools are a source of many injuries, and even death, particularly from people diving head first into shallow water. Once again, liability is dependent upon the particular facts of any situation, but the courts have looked at such factors as whether or not warning signs of shallow water were clearly posted, the injured diver’s knowledge of the area in question, the training and experience of the injured diver, whether the pool owner regularly maintained the pool and the diving board, whether a verbal warning was given to the diver, and whether or not the pool owner had a reasonable means of preventing the mishap. While court cases regarding hottubs are rarer, presumably the court will look at similar factors and those which pertain more closely with hot-tub use, such as whether or not the water was maintained at a proper temperature, whether or not warnings about alcohol consumption were given or posted, and whether or not similar warnings regarding a safe length of time to be in the hottub were given or posted.

Alcohol consumption sometimes accompanies our hosting of our friends. Our courts have often dealt with whether a person who supplied someone with alcohol ought to be liable for injuries to that person or injuries inflicted on others by that person. The courts have looked at such factors as whether the alcohol server could reasonably have known or kept track of how much alcohol was served to the person or how much alcohol she consumed before she came to the server’s premises, who supplied the alcohol to the person, the appearance and demeanour of the individual at the server’s premises, and the known propensity of the person’s behaviour when consuming alcohol, etc. However, thus far Canadian courts have only imposed liability upon a commercial host such as a tavern or a restaurant, but the time may come when the courts may impose liability upon a purely social host.

Another example of potential liability for a homeowner is with respect to the family pet. The courts have imposed liability upon dog owners where the dog’s vicious propensities are known to the owner and the dog is allowed to run free. Liability has been imposed as well where a dog owner has not acted reasonably to restrain the dog. If the dog does not have a history of attacks so its viciousness was unknown to the dog owner, or if the dog owner took reasonable steps to restrain the dog, the court would be less likely to impose liability if the dog escapes and attacks someone. If the dog’s viciousness is known, a homeowner may wish to regularly maintain  the dog’s restraints or enclosure. The presence of noticeable warning signs about the dog might also be considered by the court.

As homeowner or tenant, people face potential risk that they will be exposed to liability for injuries that a person might sustain every time someone sets foot on their property. However, there are many common sense steps that an occupier can take to help ensure the risk of injury to any guests are minimized. This is often nothing more than a warning to the guests of potential dangers. An occupier may want to run the risk of sounding like a worry wart to ensure that exposure is at a minimum. Homeowners and tenants may also wish to protect themselves further with liability insurance for their home in case they cannot think of eve rything to
guard their guests against. Common sense plus insurance will go a long way to ensure that the inconvenience caused by one’s guests is limited to supplying food
and cleaning up after them.