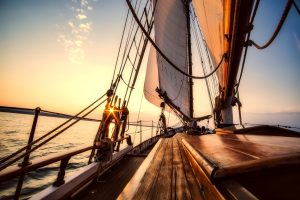 Boating is BIG in Canada. The Canadian Safe Boating Council estimates that approximately 40% of Canadians participate in boating and that there are about 5 million boats in Canada.  The boating season in Canada, especially for the in-land lakes and rivers, is typically between May and October, or more specifically, the Victoria Day Weekend to Thanksgiving.  Even on the West Coast, where people boat year-round, many boaters tend to do most of their boating during the summer season and cut back when the weather gets colder.

If you have a small open boat, like a canoe, kayak or small motorboat, you cannot drink on board at all and can only transport alcohol from point to point if it is in a sealed container.This means throughout the summer, boating season is in full swing. With warmer waters and hotter days, many people enjoy fun-in-the-sun adventures on their boat. And although there is a strong hang over (pun intended) from years gone by that boating and drinking go together, it just simply is not the case anymore.  It has taken a long time to get the message out that the risks of drinking and boating can be as significant as drinking and driving. Studies by the Lifesaving Society of Canada have shown that approximately 40% of boating-related fatalities have alcohol as a contributing factor.  And that number does not take into account other impairments like prescription drugs or the use of cannabis, whose pending legalization is likely to drive those numbers of impaired operation up.

In all provinces and territories (except Quebec), to legally drink on board a vessel, it must first be equipped as a residence.  Under Canadian law, if you are convicted of Impaired Operation of a Vessel, your first offence will award you with a minimum fine of $1000. For your second offence, include 30 days of imprisonment and with your third (and any subsequent offences), expect to spend at least 120 days in jail.

In 2006, Bill 209 of the Highway Traffic Amendment Act (Drinking and Boating Offences) was passed in Ontario. The amendment authorizes marine police to suspend your driver’s licence for 12 hours if you’re caught with up to 50 to 80 milligrams of alcohol per 100 millilitres of blood. If you blow over 80 mgs., your licence will be suspended for 90 days.

And the effect on your automobile driver’s licence doesn’t stop there.  A first conviction for impaired driving of a motorboat will now result in a one-year suspension of your automobile driver’s licence along with a series of fines. To get your licence reinstated, you will have to enroll in the Back on Track driver rehabilitation program – which will set you back another $500.

When your licence is reinstated, you’ll have to use an ignition interlock device in your car for at least a year (say goodbye to another $1,000).  And that does not touch on all the other issues that follow including a criminal record, (prohibiting visits to the USA) and your insurance rates will go ‘through the roof’.

There is NO difference between drunk driving and drunk boating in the eyes of the Criminal Code of Canada.

While most Canadians are slowly starting to get the message “Don’t drink and boat”, the statistic that 40% of alcohol use is associated with fatal accidents is not dropping very fast.  With the expected legalization of cannabis there is the potential of a whole new level of impairment on the water, and that doesn’t take into account prescription drugs that can add another source of impairment.

Who can drink, when and where?

In all provinces and territories (except Quebec), to legally drink on board a vessel, it must first be equipped as a residence.  That means proper sleeping facilities, a head (boat jargon for washroom) and cooking facilities must be present. But even with a floating house, drinking on board is only allowed when theboat is at anchor, docked or hard aground …and never while underway.

In the province of Ontario, (and other provinces are considering similar laws), impaired operation of your boat extends to your privileges to drive your automobile.  If you have a small open boat, like a canoe, kayak or small motorboat, you cannot drink on board at all and can only transport alcohol from point to point if it is in a sealed container. If you have open bottles of alcohol or an open case of beer on board could result in a charge.

Like drinking and driving, drinking and boating is no longer socially acceptable.  There is heightened enforcement on the water and the remedies are severe. Canadians love boating, but the Canadian Safe Boating Council urges you to “Boat Sober” and leave the drinking until you are safety back on shore.

Cheryl Gallagher is a marketing professional with extensive boating experience. She is currently a project manager for the Canadian Safe Boating Council.