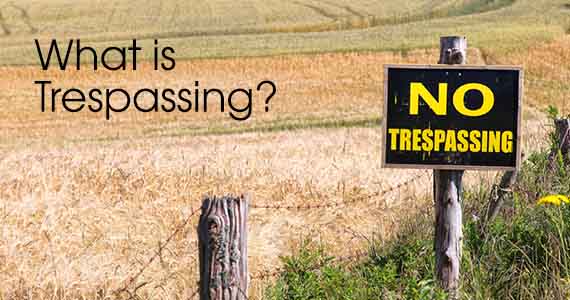 The act of “trespassing” is often conceptualized as one person setting foot on another person’s land without their consent. “Get off my property, you’re TRESPASSING!” is a common phrase landowners employ when faced with uninvited guests.

At law, the term “trespass” encompasses much more than individuals creeping onto their neighbour’s property without permission. In fact, a landowner’s right to be free from intrusions (be it people or objects) extends to both the air above and the ground below their land. This legal principle stems from the latin maxim, cuius est solum eius est usque ad coelum et ad inferos, which roughly translated means: for whoever owns the soil, it is theirs up to heaven and down to hell. What is the concept of trespass beneath land, and a landowner’s recourse when faced with such an event?

Generally speaking, trespass to land occurs when there is an unjustifiable intrusion by one person upon another person’s land. Trespass also occurs when something is placed on (or in) land that is owned by another. The law’s rationale is that a landowner is entitled to freedom from permanent structures which in any way impinge upon the actual or potential use and enjoyment of his/her land. Should such a scenario occur, the law provides that a landowner has a right of action in trespass. A landowner’s right to be free from intrusions extends to the ground beneath an owner’s land. In Philips v. California Standard Co., 31 W.W.R. 331, the Alberta Court of Queen’s Bench confirmed that:

This principle is best explained by way of example. In Vetro v. Strata Plan VR2546, 2008 BCPC 275, the plaintiff landowner sued the defendant condominium developer because rods, rebars and concrete boulders were found protruding into his land from the neighbouring condominium complex. Upon discovery, the plaintiff promptly had the rods, rebars and concrete boulders removed. He brought an action in trespass and sought damages for the costs of removing the items and for pain and suffering.

The Court found that the continued presence of the rods, rebars and concrete boulders on the plaintiff’s land constituted a trespass as they remained underneath the land until their discovery. The plaintiff was awarded damages for the costs of having the items removed. The Court did not account for the fact that the rods etc. were inserted into the plaintiff’s land by mistake. A trespass is deemed to occur whether or not the trespasser has knowledge of his or her actions.

Should you discover that the ground beneath your land has been trespassed against, you may seek either an injunction or damages. A court will order that the objects beneath your land be removed or will alternatively order the defendant to pay damages to compensate for the harm done to your property.

There is a very limited set of defences available for trespass generally, which also apply to trespass beneath land. The defences are:

Unless the trespasser can satisfy a court that he/she meets one of the defences outlined above, his/her chances of escaping an injunction or damages award are slim.

Should you discover that there has been a trespass beneath your land, seek legal advice as soon as possible. You will want to avoid the perception that you are consenting (even implicitly) to the actions of trespassers. In the eyes of the law, your right to protect the land beneath the surface of your property is just as sacred as your right to protect the land on the surface of your property.

Samina Thind is an associate with the firm of Miller Thomson LLP in Edmonton, Alberta.