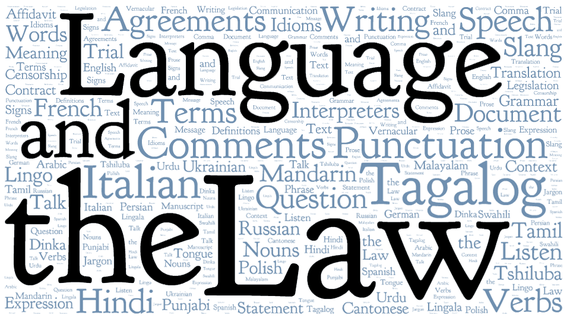 Featured Articles: Language and the Law

Special Report: The Law and Persons with Disabilities

Featured Articles: Language and the Law

The choices we make in language – words, even punctuation – can shape legal results.

Sometimes, for want of a comma, the lawsuit is lost!

You Can’t Do or Say That: Constraining Individual Conduct in a Public and Commercial World

Morality clauses in contracts use language to describe unacceptable conduct and both parties to the deal have important interests in what the words say.

The Intersection of Law, Language and Culture

In Canada, the question of ‘language rights’ is a very important part of our legal landscape.

Quebec’s Need for Cultural and Linguistic Protection, the Notwithstanding Clause and the Demise of Meech Lake

This project addresses one Canadian city’s response to a crisis in (mis)interpretation in Canadian courts.

Special Report: The Law and Persons with Disabilities

A Progress Report of Disability Rights since the Charter

Much progress has been made on the legal rights of the disabled since the Charter became law in 1982, but much could still be done.

Meaningful Access: Students with Learning Disabilities Strive to be Included

One British Columbia family fought all the way to the Supreme Court of Canada to clarify the law on learning disabilities.

Tax Assistance for Persons with Disabilites

Canada’s Income Tax Act has a number of provisions for tax benefits for disabled Canadians and their caregivers.

Persons with Disabilities and the Law – Resources for Research

Librarians at Alberta Law Libraries can help with research into many aspects of disability law.  Just ask them!

Freedom of Association and Collective Bargaining: Are the Justifiable Limits?

A Brief Primer on Child Support: Part One

Protecting Yourself from Consumer Fraud and Scams

Whatever Happened to … The Law of Sniffer Dog Searches: Part 2