In the previous part of this article, I talked about Richard Gardner’s concept of parental alienation syndrome, some of the controversy Gardner’s theory raised in the mental health community and the important contributions made by Joan Kelly and Janet Johnston when they distinguish cases of parental alienation from situations in which children have become justifiably estranged from a parent. According to Kelly and Johnston, children’s relationship with a parent can break down for reasons other than the efforts of the other parent. Sometimes, a child’s rejection of a parent is a reasonable consequence of the child’s experience of that parent, as might be the case if the child witnesses family violence or the parent has issues with substance abuse that impair his or her parenting.

The malicious alienation of a child from a parent is a real phenomenon, to be sure. It is a tragedy when it happens, and can have life-long effects on children, ..

The Canadian Research Institute for Law and the Family recently took a similar look at court decisions from Alberta. Between 2005 and 2015, we discovered 37 cases involving allegations of alienation that were relevant to the claims the court was being asked to consider:

In these Alberta cases, as in the cases examined by Bala, Hunt and McCarney, mothers were more often accused of engaging in alienating behaviour than fathers and other family members: 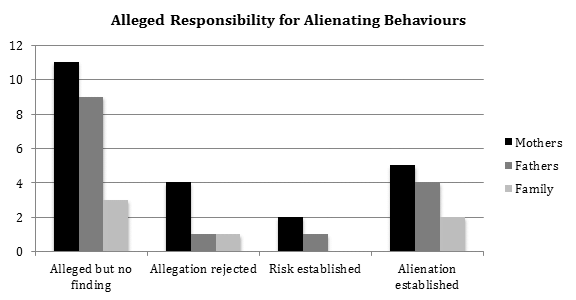 As these cases suggest, it’s much easier to allege that a parent is engaging in alienating behaviours than it is to prove that alienation has actually occurred. (Over the course of 13 years of practice, I became involved in only three, perhaps four, cases in which it was evident that alienation had occurred, and in two of those cases I was counsel for the child rather than a parent. However, my custody clients often started their work with me convinced that alienation was a live issue.) Part of the difficulty with allegations like these is that there are a number of reasons other than alienation why a child might resist contact with a parent, including:

A child might also be justifiably estranged from a parent, rather than alienated, for the reasons pointed out by Kelly and Johnston, including:

The Canadian Research Institute for Law and the Family recently took a similar look at court decisions from Alberta. Between 2005 and 2015, we discovered 37 cases involving allegations of alienation that were relevant to the claims the court was being asked to consider..Finally, some parents just don’t want to admit they are poor parents or have an imperfect relationship with their children. It’s always easier to blame someone other than yourself when your child is resisting seeing you. It can also be difficult to admit your own weaknesses to your lawyer, a mental health professional or the judge.

Recognizing the risk of alienation

Thankfully, Nicholas Bala and Barbara Jo Fidler provide a helpful list of red flags that suggest when alienation may be a risk in their 2010 article Children Resisting Post-Separation Contact with a Parent, including the following, some of which I have paraphrased and expanded:

Badmouthing the other parent

Limiting the child’s symbolic contact with the other parent

Limiting communication between the child and the other parent

Refusing to communicate with the other parent about the child

Options and alternatives when alienation is established

The malicious alienation of a child from a parent is a real phenomenon, to be sure. It is a tragedy when it happens, and can have life-long effects on children, which I’ll discuss in a future article, not to mention its effect on the wellbeing of the rejected parent. It is important, however, to distinguish between refusal to visit caused by: actual alienation resulting from the malevolent actions of the favoured parent; other potential explanations for a child’s reluctance to visit a rejected parent, including factors relating to the child’s age, gender and the circumstances of the parents’ relationship; and, the justified estrangement of a child resulting from the behaviour of the rejected parent.

What makes the tragedy of parental alienation so much worse is that the remedies available to the court are so clumsy and of such uncertain benefit. I’ll talk about the legal and therapeutic options available when alienation is suspected and established in the third and final part of this article.