You are here: Home / Sections / Employment / A Year of Holidays
Reading Time: 4 minutes

The Christmas and New Year holiday season is a good time to reflect generally on work and legally enforced rest. This article is about the law of holidays, the legislated observance, and payment of holidays by employers across the country for the benefit of their workers.

There is substantial overlap of holidays in Canada. But you may be surprised by some of the regional variations.

Beyond these five common holidays, each province and territory, as well as the federal sector, has its own distinctive set of statutory holidays. This table summarizes the respective provincial and territorial employment standards legislation.

Not all statutory holidays are employer-paid days off.  Just as each jurisdiction has its own holidays, they each have their own criteria for holiday pay eligibility.  In addition to the standard five national holidays, the federal Canada Labour Code sets apart Victoria Day (the Monday preceding May 25), Thanksgiving Day (second Monday of October), Remembrance Day and Boxing Day.

The Atlantic provinces mandate the fewest public holidays – two in addition to the five national holidays, and no Thanksgiving Day. However, these provinces also allow optional holidays that employers usually grant. For example, in Newfoundland and Labrador, St. Patrick’s Day, St. George’s Day, Discovery Day and Orangemen’s Day are observed, but not legislated. By contrast, British Columbia, Saskatchewan, Yukon, Quebec, and the North West Territories all have the highest number of paid statutory holidays; namely ten. 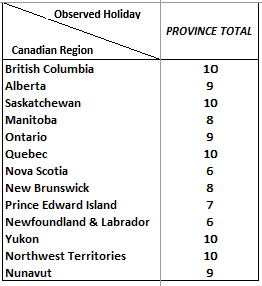 Remembrance Day is a statutory holiday everywhere except in Ontario and Quebec, but these places enjoy Boxing Day. Family Day, the third Monday in February, has caught on in six provinces.  Victoria Day in Quebec is called National Patriots Day.  Civic holidays are often named after the province or heritage and are set in August.  Overall, some twenty four unique public holidays are observed each year in Canada.

Not all statutory holidays are employer-paid days off.  Just as each jurisdiction has its own holidays, they each have their own criteria for holiday pay eligibility.  Generally, all jurisdictions require employees, in order to be eligible for holiday pay, to have been in employment and performed work before and after the holiday, although these details vary widely.

Mostly, employers are obligated to pay workers the average daily wage for the holiday.  This is also spelled out in more detail.  In British Columbia, the legislation states that employees get holiday pay equaling their total wages earned in the last 30 days divided by the number of days the employee worked in that time period.  In Alberta, employees working solely on commission receive holiday pay equal to minimum wage for the day.  In Saskatchewan, holiday pay is calculated as equaling 5% of the employees total wages earned in the four weeks preceding the holiday.

While statutory holidays offer most employees a break, many employees will still have to work. In most provinces and territories, an employee who works on a statutory holiday receives 1½ times the regular wage plus the holiday pay they would have received had they not worked. Most places (Alberta, Saskatchewan, Ontario, Nova Scotia, New Brunswick, Northwest Territories and Nunavut) permit holiday substitution by the employer.  Employees working a holiday may be given an alternative day off for the holiday.

For longer stretches in the year – such as the week between Christmas and New Year’s Day – employers must decide whether to grant an informal holiday rest period to their employees, and whether to pay for it.  This may be negotiated in a Collective Agreement. For non-unionized employers, competitive business practice and community custom, social pressure, the desire to reward employee performance, and cultivate loyalty are all influential factors in that decision.  Many employees will not be their most productive in the workplace when their peers in the industry are indulging in a tranquil holiday.

Don’t forget to thank your employer for the holidays.  They are paying for them!