A Website of The Centre for Public Legal Education Alberta
You are here: Home / Feature Articles / 36-5: Food for Thought / Encouraging Healthy Eating Through Legislation? The Case for Mandatory Menu Labels
Reading Time: 5 minutes 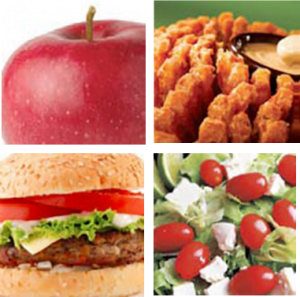 Even if governments enact laws requiring food service establishments to post nutrition facts on menu labels, the onus is still on the consumer to use that information in a meaningful way.

How many calories in that snack?

Having a mid-morning energy slump? How about a quick visit to Starbucks for, say, a café latté and a blueberry scone to hold you over until lunch? Unfortunately, that energy slump can quickly turn to energy excess with a 700-calorie snack that amounts to more than a third of your daily energy needs.

An interested consumer can visit the Starbucks website to look up calorie details of a large café latté with 2% milk (240 calories) and the blueberry scone (460 calories, no butter or jam). In some locations, Starbucks and other major chains are posting calorie details on food displays and menu boards so customers may consider the caloric implications before they make a purchasing decision.

The growing public health problems of obesity and related chronic diseases, like diabetes, high blood pressure, heart disease, and some cancers, are compelling governments to find new ways to encourage people to eat a balanced diet and avoid unhealthy weight gain. Menu labeling – displaying calorie and other nutritional details on menus – is one tool that legislators hope could help influence consumer eating choices.

The United States is leading the way with menu labeling. The City of New York implemented mandatory menu labeling in 2008. A New York state restaurant industry association brought legal action to fight the menu disclosure rule, and according to the New York Times, the “lawsuit was litigated more ferociously than death penalty cases.” The legal battle concluded in the City’s favour, however, and several other U.S. cities and states have followed New York’s example. In 2010, the U.S. federal government enacted legislation mandating national chain restaurants (those with 20 or more locations) to display calorie information.

Menu labeling has also attracted government and industry attention in Canada. A Healthy Decisions for Healthy Eating Act was debated in Ontario’s Legislature in 2009/10 and in August 2011, the British Columbia government launched the Informed Dining Program, a voluntary menu labeling collaboration with the private food service sector. Under B.C.’s program, hospital-based food service businesses are required to post nutrition information on menus. The Canadian Restaurant and Foodservice Association contends that mandatory menu labeling legislation is unnecessary, arguing that some restaurant chains already supply nutrition information through websites and other means.

The theory and the reality of menu labeling

The theory behind menu labeling – whether compulsory or voluntary – is that making nutrition information easily available at the point of purchase will help diners make healthier food choices. But is this theory proven in practice? While many consumers are enthusiastic about menu labels, recent studies suggest that menu labels have minimal impact in shifting consumer choices.

More positively, some businesses have responded to health concerns by reformulating their product lines to offer lower-calorie and healthier options. Starbucks, for instance, replaced whole milk with 2% milk in its beverages and launched a selection of “petite”, lower-calorie baked goods. Many of the high-calorie options remain, however.

According to a consumer survey conducted shortly after the New York City menu labeling rule came into effect, 89% of respondents considered it a beneficial policy change. Nearly all diners were surprised by calorie counts, with 90% saying counts were higher than they expected. In Canada, a recent federal Public Health Agency survey found that 92% of Canadians support menu labeling. Studies demonstrate that diners, even health professionals like dietitians, consistently underestimate the number of calories in fast food and restaurant meals.

Despite their popularity in opinion polls, menu labels do not necessarily change consumer behaviour in practice. Researchers have visited fast food restaurants in locations where menu labeling is mandatory and collected data on consumers’ responses to the nutrition information. Some consumers claim the menu labels persuaded them to select lower-calorie items. After collecting customers’ receipts and tallying calorie content, the researchers discovered the diners had not, in fact, ordered fewer calories. Another study found that menu labels had no impact on teenagers’ fast food choices as they said taste, rather than calorie information, was most important to them. Diet-conscious consumers, women, and people of higher socio-economic status are more likely to use menu labels to select healthier options, though some consumers who feel virtuous after making a low-calorie choice for one meal may overcompensate by eating more calories later in the day. As another unintended outcome, consumers on a tight budget may use menu labels to make value-for-money judgments and conclude they are better off buying a higher calorie meal that costs the same amount as a lower calorie option.

Some research suggests menu labels are more effective when combined with additional information, such as educational statements about average recommended daily calorie intake, or visual cues like red or green stickers on higher or lower calorie options, respectively. Since implementing mandatory menu labeling, the City of New York has launched a public information campaign to promote the message that “2000 calories a day is all most adults should eat.” The campaign shows that foods that are commonly considered healthy can be deceptively high in calories. One poster, displaying an apple raisin muffin, shows that, at 470 calories, this hefty snack amounts to nearly a quarter of daily calories. Another poster points out that a nutritious looking chicken rice burrito provides nearly 1,200 calories and poses the question, “If this is lunch, is there room for dinner?”

The bigger picture of eating behavoir

Eating behaviour is complex and ongoing research is needed to determine the impacts of menu labels over the longer term, and also to consider what other policies or legislative measures may help encourage healthier choices. Even if governments enact laws requiring food service establishments to post nutrition facts on menu labels, the onus is still on the consumer to use that information in a meaningful way.

Indeed, a criticism of nutrition information measures, including labels on menus and packaged foods, and tools like the Canada Food Guide, is that they place responsibility for healthy behaviours primarily on individuals. Information provision policies are based on a premise that people simply need more facts to change their behaviour, but this approach disregards the

many economic, environmental, social and cultural factors that influence and constrain behaviour.

Food marketing that encourages high-calorie consumption may override the influence of menu labels or other information strategies. Price incentives are also important. For instance, Subway introduced a $5 foot-long sub that encouraged higher average calorie intake among Subway customers, even in U.S. locations where calorie counts were posted on menu boards. Instead of focusing on menu labels, some nutrition experts advocate for smaller portion sizes for fast food and restaurant meals. Interestingly, a recent study investigated whether consumers would accept an invitation to “downsize” their meal by receiving smaller portions of starchy side dishes at a Chinese restaurant. Up to 30% of diners accepted a reduced portion size, even without a discount on the price of the meal. In this study, menu labeling did not promote lower calorie intake.

It is unrealistic to expect that menu labeling, on its own, will make much difference in the ongoing public health effort to control rising obesity rates and lifestyle-related chronic diseases. Nonetheless, it is worth encouraging the food service industry to make calorie and nutrition information easily available to consumers at the point of purchase. Health-conscious consumers who are concerned about nutrition may use menu labels to inform their choices. While some information is likely better than no information in this context, informational strategies alone are not enough and other policy and legal tools, including tax measures and regulation of food marketing and content, may have a broader impact on altering the many obesogenic aspects of modern environments.