A Website of The Centre for Public Legal Education Alberta
You are here: Home / Columns / COVID-19 / CRIMINAL | There is no Monopoly Man and COVID-19 is Not a Get out of Jail Free Card
Reading Time: 4 minutes

Amidst the COVID-19 pandemic, there has been public query and fear (and at times outrage) over whether or not the COVID-19 pandemic allows violent criminals to roam free on our streets. Salacious and tantalizing commentary has sparked public debate over whether or not our justice system remains operable, and whether it can still function as a mechanism for law and justice during this unprecedented time. 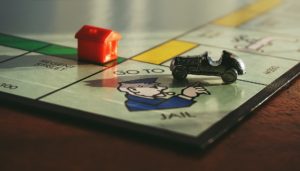 Recent media publications have touched at the very heart of this inquiry: are courts automatically and unjustly releasing on bail violent criminals because of the COVID-19 pandemic?

Firstly, our bail system is premised on the vital right to a presumption of innocence. That is not watered-down Kool-Aid speak from a defence lawyer. That is a constitutionally entrenched and fundamental concept of our justice system. The reason why criminal trials exist in our country is because there is a presumption of innocence. From that legal starting point, our bail system has developed a series of legal tests and requirements that set out the parameters of consideration for release into the community after arrest. This intrinsic and essential part of our justice system did not get thrown out the window because there is a virus that is effecting the day-to-day operation of our court system. Imperative legal precedents, requirements, statutes, tests and standards have not been suddenly flushed down the proverbial toilet. Instead, the justice system has adapted (as any modern and liberal justice system should) to the changes that this pandemic demands. The risk of contracting the virus in custody is one of many factors thrown into the pot of consideration for the Crown and presiding justice when considering release. However, the case law developing from the courts has been crystal clear: the fact that an inmate is at a heightened risk in custody for contracting the virus is not itself a ticket out of jail. The traditional legal tests and requirements for release still must be met. It is pure fiction and propaganda to suggest that our justice system is suddenly releasing violent offenders back into our communities with little regard for anything but the risk of that alleged offender’s risk of contracting COVID-19.

What the COVID-19 pandemic has affected, more than anything, are the procedural demands and practices of our justice system.Secondly, the idea that “violent criminals” are being released back into our communities on bail erroneously assumes their guilt. Any individual released on bail is presumed innocent. An individual released on bail has not been convicted of that crime. Individuals on bail have passed the legal tests and standards required for lawful release, including the threshold that the Crown’s case against that individual is so strong that the public would not favour incarceration, despite the presumption of innocence. Our bail courts have used this legal test daily for years. The legal test did not suddenly vanish when a strange virus infiltrated our country. Presiding justices did not simply forget to apply that test because they are under the spell of COVID-19.

Thirdly, should the Crown believe the court made the wrong decision in releasing the individual – as the highly respected criminal defence attorney Frank Addario reminds us all in a recent Zoomer Radio podcast – the Crown has the right to appeal the decision for release to a higher court. It is in these higher courts where some of the most experienced, accomplished and reasoned judges preside.

Lastly, to suggest that our justice system whimsically releases individuals during this pandemic is nothing short of an insult to every member of our justice system who works tirelessly to ensure the lawful application of justice to every matter. No clever defence attorney tricks during this pandemic assist an alleged offender when they are facing serious charges. The judicial weighing of factors for and against release is not affected simply because a defence lawyer thinks they are good at running bail hearings and pulls the COVID-19 card from their pocket. Our criminal justice system isn’t a flashy legal drama airing at 8 p.m. ET tonight.

… the idea that “violent criminals” are being released back into our communities on bail erroneously assumes their guilt.What the COVID-19 pandemic has affected, more than anything, are the procedural demands and practices of our justice system. Courts are accommodating bail hearings via telephone and guilty pleas via video conferencing mediums like Zoom. The courts are closed to the public, and hearings are no longer conducted in person. We must wait to see how the courts will effectively deal with the backlog of cases that has inevitably occurred. It is a day-to-day process of adaptation and development.

However our justice system approaches the COVID-19 pandemic, protecting the public has always been one of the pillar functions of our justice system (contrary to some commentary and fear mongering critics). A little virus, no matter how mighty, will not erase this concept and purpose of our independent and adapting justice system. If anything, it has enhanced the public safety concern from the courts’ perspective.

To buy into sensational comments to the contrary is an ill-fated attempt perhaps to Velcro our fears and concerns about the virus itself into all aspects of our community. This should not be the case. Not a vicious little virus, nor soapbox propaganda, will shake the rule of law in our justice system. So, rest assured, our courts are here to protect all members of the public. Even defence lawyers.

Melody is a criminal defence lawyer with the firm Caramanna Friedberg LLP, located in Toronto, Ontario.