You are here: Home / Feature Articles / 39-5: The Law and Canada's Indigenous People / Inuit Rights to the Arctic
Reading Time: 6 minutes 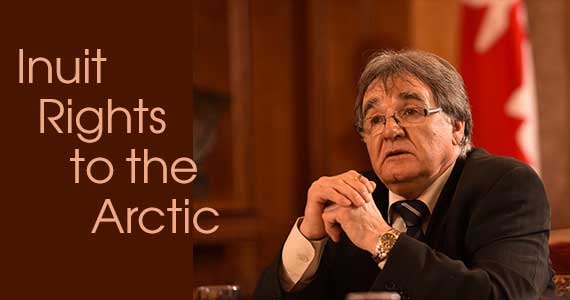 As I continue my work on the issue of Inuit rights to the Arctic, my guiding principles are that Inuit must be equal partners in decision-making in the Arctic, resource development must promote the health of Inuit communities, and the environment must be protected.

I am currently looking at what impact the melting ice has on our agreements with Canada and other nations. As the ice melts, the seabed resources are more accessible and therefore attractive to corporations and governments from around the world. Although many are debating the boundaries of the continental shelf, for me, the bigger issue is: who owns, governs and benefits from the Arctic seabed and its resources?

I have been thinking about the larger issues of sovereignty and Inuit control of the Inuit homeland for many decades, but have been actively working with international partners on this file for over five years.Although many are debating the boundaries of the continental shelf, for me, the bigger issue is: who owns, governs and benefits from the Arctic seabed and its resources? Prior to this, issues of Indigenous human rights were our priorities at home and on the international front.

Since the 1970s, Inuit have been working to advance our rights in Canada and to support Inuit across the north. We have worked with Indigenous peoples from other nations to help them achieve recognition from their own governments and from the international community.

The Inuit have strong land claim agreements in place. In my region of Northern Quebec we have the James Bay and Northern Quebec Agreement (JBNQA). This was signed in 1975 and is considered the first modern treaty in Canadian history. To date, there are four Inuit regions in Canada and all of these areas are coastal northern regions: Inuvialuit (in the Northwest Territories), Nunavut, Nunavik (northern Quebec) and Nunatsiavut (northern Labrador).

In addition to our land claim agreements, which confirm that Canada and Inuit will work together as partners in the north and that Canada will respect Inuit rights, we have additional protections in section 35 of the Constitution, and Canada has a duty to consult with Inuit on matters that have the potential to affect our rights.

The Arctic Ocean Ice is part of the Inuit Homeland

As Inuit we have always lived on the ice, and the ice is our winter “highway” across the tundra and from one shore to another. We have historic links across the Arctic from Greenland, to Nunatsiavut (Northern Labrador), the northern part of Canada and Alaska and even across the Bering Strait to Russia and the Scandinavian countries. We continue to keep these relations through organizations like the International Circumpolar Council (ICC) and the Arctic Council, and the many agencies of the United Nations (UN). To date, there are four Inuit regions in Canada and all of these areas are coastal northern regions: Inuvialuit (in the Northwest Territories), Nunavut, Nunavik (northern Quebec) and Nunatsiavut (northern Labrador).

As the ice melts, however, our relationship with our territory is changing and the Arctic is becoming more accessible to the global community. As a result, we are dealing with huge changes in our home communities and fighting new battles in the international arena.

Where others might see empty space, we see our traditional homeland, the inheritance we will leave for our children. Because the tundra is my home, I rely on the land and sea for survival. My meals come from the land in the form of caribou, bear, and reindeer and the sea provides fish, seal, and shrimp. We collect eiderdown in the summer to make sleeping bags and parkas and we hunt for ptarmigan and geese, which are like our turkeys.

Although the Arctic sea ice and water is part of our territory, it lays outside of the territory included in our land claim agreements. Where others might see empty space, we see our traditional homeland, the inheritance we will leave for our children. We have not given explicit right of use to any government, nor have Inuit given Canada the right to claim the sole right to the resources in the extended continental shelf of the Arctic Ocean when it makes its submission to the Commission.

Because the nations of the world are vying for their piece of the Arctic, this is the time for Inuit to assert our right to the Arctic Ocean within our homeland, but beyond the existing land claims agreements.

Recognition for Inuit Rights to the Arctic

Currently, Canada, Denmark, Russia, Norway and the United States, the Arctic coastal States, are all trying to establish their sovereignty over the natural resources in the Arctic Ocean, in areas known as the “extended continental shelf”. All but the United States have agreed to submit the boundaries of their extended continental shelf claim to the Commission on the Limits of the Continental Shelf, a body created under the United Nations Convention on the Law of the Sea (UNCLOS). The Commission will assess if the boundaries claimed by Canada, Denmark, Russia and Norway conform to the rules set out in UNCLOS and if enough evidence has been provided to support each State’s claim.

At the time that these laws and UNCLOS were developed , Indigenous rights were less recognized than they are today. The last thirty years have seen dramatic changes in the area of international law and Indigenous rights. Indigenous peoples were not given the opportunity to have a voice in the making of UNCLOS, as they have with other international conventions, such as the 1992 United Nations Convention on Biological Biodiversity, made only a decade after UNCLOS came into being.  The UNCLOS system needs a serious update to reflect the international laws and standards that respect and protect Indigenous peoples’ rights. Today, we have the United Nations Declaration on the Rights of Indigenous (UNDRIP), which specifically recognizes Indigenous peoples’ rights to their territories.  Canada signalled its support for UNDRIP in 2012, and has committed to working towards better processes to include Indigenous participation. This means that Canada should also be respecting Inuit rights to the Arctic Ocean, as should all Nation-States.  I do not believe that it is right for Canada to use the UNCLOS system as a way to get around the rights of Inuit and other Indigenous peoples to the Arctic Ocean.

As Inuit, we are concerned that Canada may claim areas of the Arctic Ocean that rightfully belong to Inuit (even those areas beyond existing Canadian territorial boundaries) and because it’s our territory, we are looking for ways to participate in the dialogue at the international level. By not working with Inuit, Canada is missing an opportunity to strengthen its rights in the Arctic Ocean, as Inuit historical use and occupancy of the Arctic is a strong argument for Canada’s sovereignty in the region. We are trying to work with Canada to ensure that Inuit Aboriginal title to the ice and waters within our homeland is recognized and protected.  This includes portions of our homeland that lie outside the boundaries of the land claims agreements.

The issues of hunting and sustainability are important to us, and we are also concerned about environmental issues like oil spills and chemical pollutants in the food chain. Resource extraction and development can threaten our livelihood and our rights to access healthy foods, so finding clean energy sources is important.

The need for Indigenous inclusion is an issue for UNCLOS and for other UN processes, and is highly problematic for Indigenous peoples around this world.

In response, the Indigenous delegates at the United Nations are challenging this exclusion – and are developing protocols to ensure Indigenous rights are not ignored in existing or future protocols.

The UNCLOS process and Arctic Sovereignty come under the direction of the Department of Foreign Affairs and Trade Development (and to a much lesser degree National Defence). The question we have asked Canada is why the government isn’t including Inuit perspective or knowledge in its submission to the Commission. By not working with Inuit, Canada is missing an opportunity to strengthen its rights in the Arctic Ocean, as Inuit historical use and occupancy of the Arctic is a strong argument for Canada’s sovereignty in the region.

We insist that future development of the Arctic includes Inuit – that we are not left outside the decision-making process. If there is an economic boom in our territory, it must benefit the Inuit people and not be done at our expense. Canada should not be able to claim portions of the Arctic Ocean that Inuit have historically occupied unless Inuit give consent. We are looking at our options in Canada and in the international system.

As Canadians we need to focus on our national processes to ensure Inuit are included in decisions that affect the Arctic.

My hope is that future Senate appointments will include Indigenous people from across Canada so that Inuit voices will be represented in the Canadian legislative system. Particularly, we need to see appointments from the regions most impoverished, and from groups that are under-represented in the House of Commons. We are the original residents of Canada and we are deserving of respect. As the founding peoples of this nation, we deserve to have a place at the table.

The Honourable Charlie Watt is the only Inuk Senator in Canada. In 1984, he was appointed to the Senate by the Right Honourable Pierre Elliott Trudeau for his advocacy on behalf of the Inuit. Senator Charlie Watt represents the province of Quebec and the Senatorial Division of Inkerman.
For additional information on Arctic Sovereignty or Senator Watt, please see http://liberalsenateforum.ca/senator/wattc/