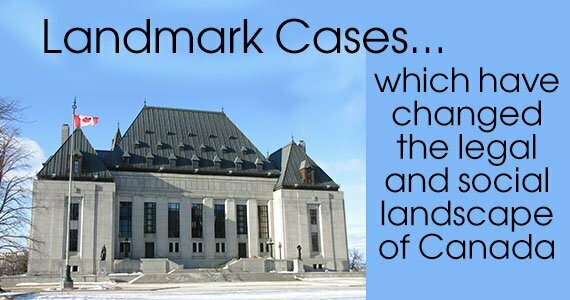 Judgments may constitute landmark decisions in the social context of their time such as the Persons Case (Edwards v. Canada (Attorney General), 1930 ) — where the Privy Council determined that women were eligible to be appointed to the Senate — but may not seem so very startling to our modern sensibilities. Although the Privy Council in Edwards did not embrace the concept of the rights of women, the decision marks an early incremental change to the systemic prejudice against women. The year 1982 heralded a new era for judicial opinion with the birth of the Constitution Act and a veritable bonanza of challenges to legislation. Today, society more vigorously contests injustice and inequality, leading to some hotly contentious pronouncements. However, disputes brought before the courts have resulted in positive societal change, perhaps in unforeseen ways.

There are quietly iconoclastic decisions such as the 1985 case of Big M Drug Mart Ltd., [1985] 1 SCR 295 heard by the Supreme Court of Canada. Its unassuming beginning occurred on May 30, 1982 when Big M Drug Mart was charged with selling groceries, plastic cups and a bicycle lock thereby “unlawfully carrying on the sale of goods” contrary to the federal Lord’s Day Act. This decision resulted in the transformation of commercial activity and a concomitant change in society’s shopping habits. In response, Big M Drug Mart challenged the constitutionality of the legislation, alleging, in part, that the Act offended the s. 2 Charter guarantee of “freedom of conscience and religion.”

The “Lord’s Day” was defined as “the period of time that begins at midnight on Saturday night and ends at midnight on the following night.” Performing work or commercial activity during that time was subject to sanction. Reviewing the historical context led the Court to quote from Saxon Dooms, a law promulgated in Anglo-Saxon England by Ine, King of Wessex from 688 to 725:

“If a theowman [slave] work on Sunday by his lord’s command, let him be free; and let the lord pay thirty shillings as a fine. But if the theow work without his knowledge, let him suffer in his hide, or in hide-gild [money paid in lieu of corporal punishment]. But if a freeman work on that day without his lord’s command, let him forfeit his freedom, or sixty shillings; and be a priest doubly liable.”

The Court moved from Saxon times, through the Tudors and Stuarts and the intervening Commonwealth, to pre-Confederation legislation before concluding that “The Lord’s Day Act is enacted pursuant to the criminal law power under s. 91(27) of the Constitution Act, 1867. In providing for the compulsory observance of the religious institution of the Sabbath (Sunday), the Act and especially s. 4 thereof does infringe on the guarantee of freedom of conscience and religion in s. 2(a) of the Canadian Charter of Rights and Freedoms and this infringement cannot be justified on the basis of s. 1 of the Charter. I would declare the Lord’s Day Act to be of no force or effect, by reason of s. 52(1) of the Constitution Act, 1982.”

This decision resulted in the transformation of commercial activity and a concomitant change in society’s shopping habits. However, the Supreme Court of Canada has also curbed advertising powers to protect a vulnerable segment of  the Canadian population, as the next case shows.

Freedom of expression includes commercial freedom, and corporations are able to persuade us of the desirability of their products with constitutional abandon, except in Quebec. Irwin Toy Ltd. challenged the constitutional validity of the provincial Consumer Protection Act which prohibited advertising to children under 13 years of age (Irwin Toy Ltd. v. Quebec (AttorneyGeneral), [1989] 1 SCR 927). The Supreme Court of Canada held that although the legislation infringed a constitutional guarantee, the legislation was reasonable and demonstrably justified and therefore the prohibition was valid:

“Children are not as equipped as adults to evaluate the persuasive force of advertising and advertisements directed at children would take advantage of this. The legislature reasonably concluded that advertisers should be precluded from taking advantage of children both by inciting them to make purchases and by inciting them to have their parents make purchases. Either way, the advertiser would not be able to capitalize upon children’s credulity.”

Not all landmark decisions are so socially subtle. For example, the repatriation of the Constitution and the resulting jurisprudence defined modern Canada.

1982 and the Patriation of the Constitution

The year 1982 heralded a new era for judicial opinion with the birth of the Constitution Act and a veritable bonanza of challenges to legislation. Barristers enthusiastically adapted legal memoranda with creative Charter arguments, resulting in panoply of jurisprudence by a predominantly patient judiciary.

The Charter of Rights and Freedoms

The Supreme Court of Canada has affirmed the right to be secure in your own home but, being Canadians, the right to privacy is not limited to your own castle but also to rudimentary shelters (Colet v. The Queen, [1981] 1 SCR 2):

“It is true that the appellant’s place of residence was nothing more than a shack or shelter which no doubt was considered inappropriate by the City of Prince Rupert, but what is involved here is the longstanding right of a citizen of this country to the control and enjoyment of his own property, including the right to determine who shall and who shall not be permitted to invade it. The common law principle has been firmly engrafted in our law since Semayne’s case in 1604 where it was said ‘That the house of every one is to him as his castle and fortress, as well for his defence against injury and violence, as for his repose …’”

Charter of Rights and Freedoms decisions have had an impact on every aspect of Canadian life, spearheading a different societal view. However, landmark decisions also reflect change, including scientific discoveries and societal values. The court’s consideration of the evolving Canadian social and scientific landscape drives the evolution of the common law, on occasion resulting in the Court revisiting and revising former precedents.

Impact of medical advances on the criminal law

In 1998, the Supreme Court of Canada, in R. v. Cuerrier, [1998] 2 SCR 37 released the landmark decision that non-disclosure of HIV status transformed an otherwise lawful encounter into criminal behaviour by vitiating the consent of the uninformed participant.  The court’s consideration of the evolving Canadian social and scientific landscape drives the evolution of the common law, on occasion resulting in the Court revisiting and revising former precedents. Over the next fourteen years, the Canadian judiciary considered the Cuerrier test in the many prosecutions where the application of that test was disputed. Over that same fourteen years, scientific advances brought significant improvement in the treatment of the disease and a resulting reduction in its transmission rates. These factors, viewed through the filter of Charter values, inform the decision of R. v. Mabior, [2012] 2 SCR 584.

The Supreme Court of Canada  in Mabior considered whether an HIV positive person engaging in sexual activity without first explaining his/her medical condition commits aggravated sexual assault. Cuerrier previously decided such circumstances met the elements of aggravated sexual assault. After reviewing the common law of fraud vitiating consent from the nineteenth century onwards, Chief Justice McLachlin wrote: “Charter values of equality, autonomy, liberty, privacy and human dignity require full recognition of the right to consent or to withhold consent to sexual relations.” These values, when applied to the law of sexual assault, show not only a crime of physical and emotional harm but also “the wrongful exploitation of another human being.”

Against this background, the Court considered the essential criminal element of  “significant risk of serious bodily harm” necessary for a conviction. That risk would be the transmission of  HIV and such a risk should be a realistic one. If a person receives antiretroviral treatment, some evidence shows the risk of transmission is reduced by 89 to 96% which, combined with condom use, substantially reduces the chance of harm. In these circumstances, non-disclosure will not vitiate consent and there would not be a conviction for aggravated sexual assault.

Interestingly, the Supreme Court of Canada made allowances for future judicial change, noting further medical advances may result in the failure to disclose no longer constituting “fraud vitiating consent.”  Mabior, in such circumstances, would not remain the judicial precedent.

The fluid nature of precedent was recently quietly considered within the more eventful consideration of the sexual trade provisions in the Criminal Code.

The effect of changing social assumptions

The Supreme Court of Canada noted:

… a trial judge can consider and decide arguments based on Charter provisions that were not raised in the earlier case; this constitutes a new legal issue.  Similarly, the matter may be revisited if new legal issues are raised as a consequence of significant developments in the law, or if there is a change in the circumstances or evidence that fundamentally shifts the parameters of the debate.

After applying those factors to the case and deferring to the Superior Court’s findings on social and legislative facts, the Supreme Court of Canada declared the impugned provisions to be unconstitutional. The Court also acknowledged this did not mean Parliament cannot legislate limits on sexual trade and new legislation is presently being considered.

Some of the decisions referred to in this article have had an unanticipated impact on everyday life. However, today we enjoy a more enlightened society than historically has been the case. The prevalence of a greater tolerance and adaptability is, in part, the result of landmark decisions by the courts which educate, reflect and reinforce the values of most Canadians.

Marian Bryant is a lawyer living and working in Iqaluit.