The Uniform Law Conference of Canada (ULCC) is a body that develops model legislation that provinces can adopt to create a consistent and harmonious legal framework across jurisdictions. It has now provided a roadmap on the issue of crowdfunding, and more specifically internet fundraising. This is timely and helpful.

The 2005 ULCC Uniform Charitable Fundraising Act (UCFA) did not cover activity of non-charities. So, a decade ago the ULCC initiated a project on regulation of fundraising not falling under the UCFA.

The effort led to release of the 2011 Uniform Informal Public Appeals Act (UIPAA). Saskatchewan adopted a version of the UIPAA. It was used in resolving problems related to administration of the Humboldt Broncos Memorial Fund.

The Uniform Law Conference of Canada (ULCC) is a body that develops model legislation …The rapid rise of online crowdfunding over the last decade, however, lead to a need to revisit some of the provisions and update some of the definitions from 2011. Developments in case law and a U.S. effort to craft model crowdfunding legislation were also factors prompting a new look at the UIPPA.

Informed by these considerations, the ULCC has updated and renamed the 2011 model statute. It is now called the Uniform Benevolent and Community Crowdfunding Act (UBCCA) and was released in August. It is available online.

The UBCCA, like its predecessor, deals with spontaneous or ad hoc public appeals by individuals or groups for funds for a specified purpose, and the trust obligations that can arise from such appeals. The concept of a trust arising from any appeal made within the scope of the UBCCA is central to the model legislation. 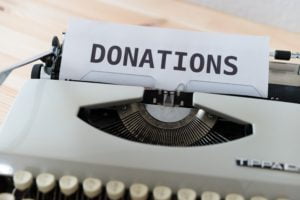 Photo by Markus Winkler from Pexels

Not covered by the UBBCA are appeals:

The legislation provides default rules and procedures for appeals within its scope. These can be supplemented or replaced by documents or provisions put in place by an individual or group organizing an appeal.

The legal term “trust” is more known than understood. Trusts can be established in a number of ways, but most commonly they are created by a trust document. Importantly, they can also arise through circumstances and representations. As it is often the case that public appeals are made with no or only partial documentation, an important role of the model legislation is to clarify that a trust relationship is created by the appeal within the scope of the UBCCA.

The model statute makes those directing “management and disbursement” of an appeal fund (or those with authority to do so) trustees. This has implications both for dealings with donors and for stewardship of funds raised. The model statute outlines various obligations, such as the need to maintain a segregated bank account for the funds, stemming from the proceeds of an appeal being a trust.

The UBCCA is intended to cover appeals for humanitarian or public purposes, rather than those of a private nature.Additionally, powers of public appeal trustees to administer funds and of the courts to oversee fund administration are set out in the UBCCA. Historically, under what is known as cy-pres power, courts have had the authority to make schemes where the purpose of charitable trust cannot, or cannot any longer, be fulfilled. This allows the court to substitute a similar purpose for the original purpose.

It also allows the courts to deal with surpluses. The model statute expands this authority to trusts for a non-charitable purpose and sets a threshold for when court approval for distribution of a surplus is required. As well as providing for expanded court oversight authority, the model statute also refines certain other aspects of existing law on UBCCA non-charitable purpose trusts.

Various means for dealing with surpluses are set out in the model legislation and apply based on whether the amount in issue exceeds the court threshold and was generated for a charitable or non-charitable purpose and based on the documentation in place.

The UBCCA provides for the ability of various persons or bodies, including (in a departure from existing law) donors, to go to court to enforce the trust.

Importantly, the UBBCA addresses what court has oversight authority when the appeal takes place across jurisdictions. Determining appropriate jurisdiction is particularly crucial given the rise of internet crowdfunding platforms.

… an important role of the model legislation is to clarify that a trust relationship is created by the appeal within the scope of the UBCCA.Another area of abiding concern was where organizers want to change the terms of the appeal over the course of a campaign. The UBBCA allows this in limited circumstances:

Finally, the UBBCA features a Schedule setting out a Trust Declaration template to encourage organizers to document in writing the terms of their appeal.

With information on online crowdfunding initiatives now so often a feature of news and social media about community and personal disasters or hardships, the ULCC work on this new model statute should be welcomed and commended. Provinces should be encouraged to adopt the UBCCA as quickly as feasible.