A Website of The Centre for Public Legal Education Alberta
You are here: Home / Feature Articles / 40-1: The Law and Technology / Social Media and the Law
Reading Time: 6 minutes 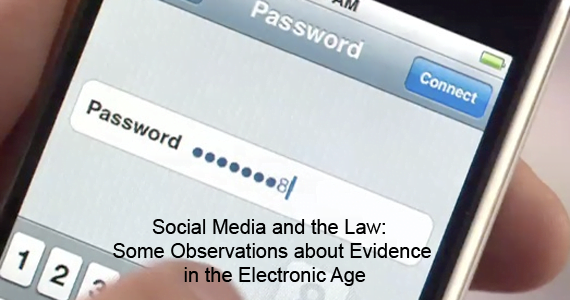 SNS users virtually trip over themselves to share a plethora of extremely personal details on their SNSs, including posts, photographs, residential details, hobbies, likes, dislikes, etc. Many SNS users seem to have no clue as to how little privacy they leave themselves. When people work on a computer alone in a room they can fail to appreciate that they are communicating with the world.

Many people have learned how to access a person’s information by accessing their SNSs including:

Four aspects of SNSs are of particular interest:

A. Background Information On Litigants And Witnesses

One must scrutinize the authenticity of an SNS profile. Fake profiles can be set up to embarrass someone or to conduct questionable Internet activity e.g. where someone sets up an SNS profile in another’s name and uses it to cyberbully others using that name.

SNS evidence has been instrumental in challenging credibility of personal injury plaintiffs. People who claim to be disabled have been “caught” being active by photos and posts on SNSs. Also, the pattern of use of one’s site (reflected in the metadata) can be relevant. For example, in the 2009 case of Bishop v. Minichiello, the British Columbia Supreme Court decided that where a claimant alleges that fatigue prevents his working, his use of an SNS during night time hours was relevant.

There are two ways to get information on someone’s SNS profile: accessing the public profile contents, and applying to court for orders to preserve and access them. The former can be done surreptitiously and sprung on the subject in court by ambush, while the latter requires notice to be given.

One can obtain access to an opponent’s SNS profile through the pre-trial document production and discovery process and with assistance from the courts. Information about an SNS profile’s contents can be elicited through questions at discovery, cross-examination on the affidavit of records, applications for preservation orders and/or interim injunctions, applications for production, or applications to compel the SNS site itself (as a third party) to disclose information.

Litigants must disclose relevant and material portions of their SNS profiles in the affidavit of records. Such materials are “documents”, subject to disclosure.

B. Communication, Notice and Service

SNSs are places where you may be able to find and communicate with people. Courts now allow substitutional service by way of social networking sites. [Knott v. Sutherland; unreported, 5 February 2009, Action No. 0803-02267m AltaQB]

The criminal law does not provide the same judicial remedies to the defence to access private portions of a subject’s SNS as does the civil law. However, police have search and seizure powers that provide them with more powerful tools to obtain access to SNS profiles, subject to the s.8 Charter right for individuals to be secure against unreasonable search and seizure. Also, under the Criminal Code, service of criminal pleadings online is not available.

B. Police On the Internet

Police are better trained, have better software and are more experienced in the employment of the Internet than the average person or counsel. Police employ SNSs for the following:

Different SNS providers interact differently with police; some readily disclose information on request, while others require subpoenas or warrants. Nowadays, many Internet and cellphone providers are adverse to the expense and hassle of having to respond to a growing number of requests from police for access to their customer data. R. v. Telus Communications Co., 2013 SCC 16

SNSs must be considered with respect to two aspects of jury trials: vetting of prospective ;and the conduct of jurors during the trial.

The courts allow prosecutors to have police review police records regarding the existence of criminal records of potential jurors R. v Emms, (2010), INCA 817. Nothing prevents defence counsel from accessing or monitoring the public portions of SNS profiles of potential jurors.

Concerns have arisen regarding juror online activity during trial, including:

Judges are now instructing juries against these practices.

Canadian courts can impose publication bans on various proceedings pursuant to the Criminal Code, including bail hearings, preliminary inquiry evidence, complainant identities and voir dire evidence. Publication bans have been subverted by posting information to an SNS. The courts must grapple with enforcement of publication bans in light of such activity.

E. Criminals On The Internet

Criminals employ the Internet, including social networking sites, to commit crimes, including fraud, stalking and cyber-bullying.

The bottom line is that users must beware of what they post on SNSs as it can provide valuable information to others, such as opposing counsel, who may effectively employ SNSs to fight their cases.

Brian A. Vail, QC is a partner with Fieldlaw in Edmonton, Alberta.