Not long ago, a class of Grade 4 students in Glenbow Elementary School in Cochrane got to work planning Alberta’s future.

First, they watched a series of videos exploring different industrial land-uses such as forestry, energy and agriculture. They also watched videos about other land-use factors including water quality, the health of fish, greenhouse gas emissions, GDP and the human population. After the videos, the students split into groups and presented a poster about an industrial land-use in the province.

And one day later that week, right after recess, the kids settled in with Alberta Tomorrow, a sophisticated, web-enabled tool that uses GIS technology and satellite imagery to simulate the effects of people on Alberta’s wildlife habitat, ecosystem services and natural resource production.

The tool lets the students examine a range of indicators and set 30-year goals for Alberta – in essence, they draw the future they’d like to see for the province. It becomes very clear, very quickly, that there are tradeoffs, and in order to create the future they want for Alberta, there needs to be careful planning today. This plain illustration of the benefits and liabilities around various land-uses really gets the students thinking, and talking.

“A typical initial Grade 4 reaction to liabilities is to just stop industrial development to save wildlife habitat,” says Jennifer Janzen, who takes Alberta Tomorrow into elementary, junior high and high school classrooms all over the province as executive director of the Alberta Tomorrow Foundation. “One (student) was even heard to say: ‘Ya, but that industry contributes to a higher GDP which helps fund our schools!’” The students have robust discussions around questions such as “How are natural resources used by Albertans?” and “How do Albertans deal with competing demands from land-use?” And it’s that kind of conversation that gives the students “a thorough understanding of how industry contributes to our GDP and economy, and how a balance between the economic benefits and environmental liabilities is what’s important,” says Janzen, a former teacher.

Brad Stelfox a landscape ecologist with ALCES Landscape & Land-Use was inspired to help create Alberta Tomorrow after a number of conversations with politicians in his day job as a consultant delivering land-use cumulative effects modelling tools and strategic land-use planning advice.

“The guidance I was getting back from politicians was yes, this is an important issue but dealing with it also causes challenges,” he says. “And until the system can create awareness and there’s a really strong signal from normal Albertans, just the average Joe, that they want politicians dealing with not only the benefits, but the challenges, they aren’t likely to respond.”

It became clear, Stelfox says, that to address the pressing land-use issues in Alberta, Albertans needed to learn more about them. So he and his colleagues Matt Carlson, Jennifer Janzen and Noah Purves-Smith got to work developing Alberta Tomorrow to foster that more informed conversation about land-use, whether it be forestry, agriculture, energy, transportation, residential development or tourism.

“There is a lot of knowledge in Alberta about the benefits of land-use. The average Albertan understands land-use is important – it gives us jobs; it gives us royalties,” he says. “Land-use creates benefits but it creates problems too, whether its air emissions or water quality or loss of wildlife habitat there are problems and there is not a very good conversation in Alberta about that.”

Years and years ago, students were taught the importance of recycling, a message they took home to their parents who saw the benefits and rather quickly caught on to the idea. Alberta Tomorrow is attempting that same model, a “bottom up trajectory” where students teach their parents. “If we can help people understand the balance, then they’re more likely to influence their politicians in a more reasonable way,” says Stelfox. “That’s the hope.”

The tool has been adapted to work with existing curriculum in elementary, junior high and high schools. “Teachers are busy, they have a defined curriculum and they only have so many hours in the day,” says Stelfox. “So the challenge was to build something they could incorporate into their busy educational curricula.”

A key challenge to delivering Alberta Tomorrow was the need to finish the land-use mapping of the province. That is where the Alberta Real Estate Foundation stepped in, and with their financial contributions, allowed this important gap to be filled.

Bringing the land-use conversation into the province’s classrooms seems to be trickling up from students to their parents. “I’ve been doing some high level professional work, and some director or CEO will comment about their daughter or son in school using Alberta Tomorrow,” says Stelfox. “Looking at my work, they’ll say this is the same issue that my child described and brought home from school. It is having an effect.”

After spending a handful of classes studying land-use and balancing the tradeoffs, those Grade 4 students in Cochrane wrote letters to the provincial government suggesting how best to balance development and the environment. The province had asked for feedback over land-use in its proposed South Saskatchewan Regional Plan, and the students were happy to provide their very informed recommendations. 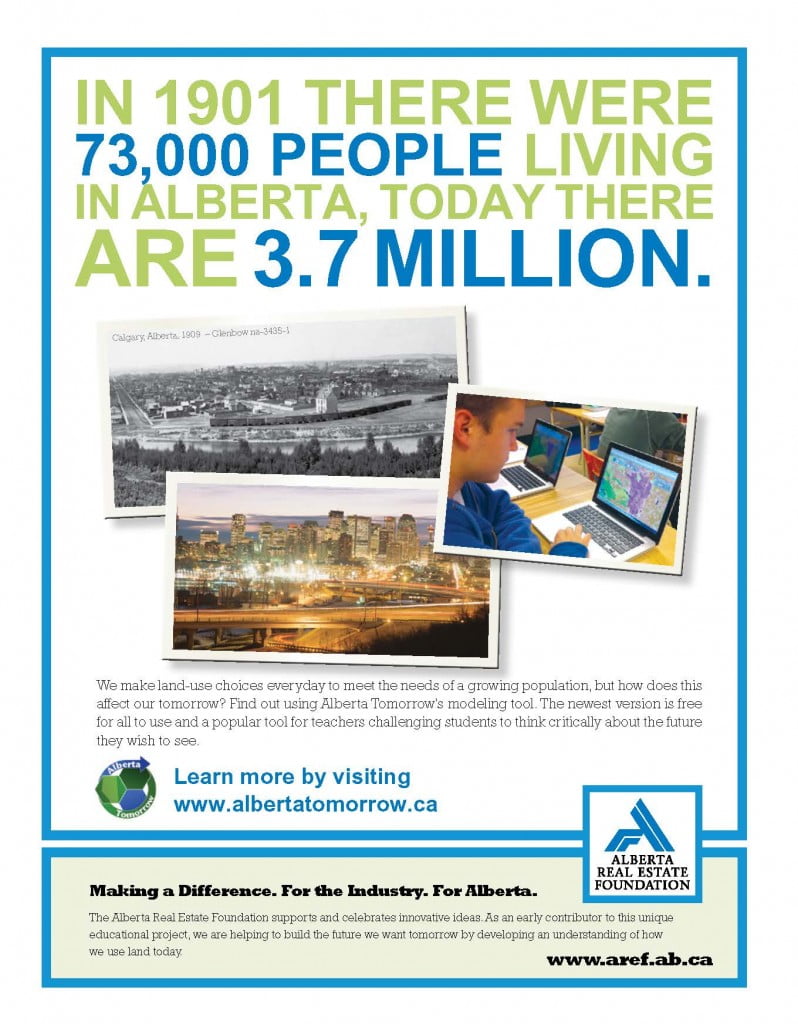 Jennifer Allford is a communications consultant with the Alberta Real Estate Foundation in Calgary, Alberta.