A Website of The Centre for Public Legal Education Alberta
You are here: Home / Feature Articles / 42-2: Five Top Questions / What Do I Have to Tell the Police if They Stop Me?
Reading Time: 6 minutes 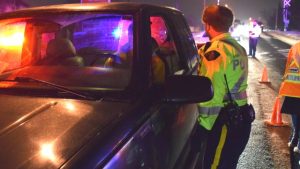 In attempting to narrow the scope of this article, I have settled upon three questions which arise most frequently for many people who do not usually come into contact with the police. These questions involve the intersection of our rights as Canadian citizens to live our lives without intrusion or interference from state agencies and officers.

It depends. It depends upon why the police are asking you to stop, and upon whether you are driving a motor vehicle, or travelling on foot.

Canadian society is founded upon the basic principle that we are free to be left alone by the government and government officials, including the police, except as permitted under the law.  In Canada, a police officer does not have the authority to randomly require an individual to stop and identify themselves or to answer police questions.

To require compliance with a demand, a police officer must first have a legal basis for the request.  If the officer has reasonable grounds to believe the person in question has committed an offence, the officer may arrest her. If arrested, the person is considered to be in the lawful custody of the officer and must remain as directed (often she will be handcuffed and placed into a police vehicle).  If the officer does not have reasonable grounds to believe the person has committed a criminal offence, but is investigating an allegation along these lines, the officer may temporarily require her to remain with the officer under what has become known as “investigative detention.” In both situations – arrest and investigative detention – the police are required to explain, and the citizen has the right to know, why she is being held.

Absent one of those situations, however, the police have no right to detain people at random.  Someone facing a general police demand to stop and speak with them is entitled to not comply and continue on his or her way.

Police officers who have reasonable suspicions that a driver has alcohol in her body have the power to demand that she provide a “roadside sample” of her breath into a hand-held unit the police carry with them.  However, the situation is quite different once that same individual is behind the wheel of a motor vehicle.  Because driving is a privilege only (it is not a right) and because of the need for and nature of the regulation of motor vehicles and their use, the police have an almost unrestricted power to stop motor vehicles and obtain certain information from drivers.  Police have the legal authority to carry out random checks to ensure vehicles are roadworthy; to check drivers for their licenses; and to ensure vehicles are properly registered and insured.  And of course, if a police officer has reason to believe the vehicle has been involved in a traffic violation (or a criminal offence) he or she will have grounds to stop the vehicle.  Failing to stop a vehicle as directed by a police officer is a provincial and territorial traffic violation, but in more serious cases the Criminal Code charge of “criminal flight from the police” can be laid.  Conviction for that offence – which often involves high speed police chases – usually leads to imprisonment.

Another of our basic legal principles is the right of every person to refuse to assist the state to prosecute himself.  The main illustration of this concept is the well-known right to remain silent (sometimes called the protection against self-incrimination). An individual who is suspected or accused of committing a crime has the unequivocal right to refuse to say anything to the police and cannot be punished for refusing to do so. Even witnesses are entitled to refuse to speak with the police if they wish. Witnesses may have a moral duty to assist police investigating an incident, but that is not the same as a legal duty. The right to remain silent is so important that the police are required to tell anyone being arrested that they have that right and if they give up the right to remain silent, anything they say can be used in court.

Because driving is a privilege only (it is not a right) and because of the need for and nature of the regulation of motor vehicles and their use, the police have an almost unrestricted power to stop motor vehicles and obtain certain information from drivers.  However, the police are entitled to try to persuade the individual to speak, including by way of continuing to ask their questions even as the individual continues to insist that he or she wishes to say nothing.  The Supreme Court of Canada has said that the right to remain silent only means the individual has the right to be silent, but it does not mean the authorities cannot speak to him or her (although if, after many hours of remaining silent, the individual does answer to the allegations or questions, there might be good arguments against allowing the state to make use of any such statements obtained only after “wearing down” the person being interrogated).

There are at least a couple of small exceptions to the right to remain silent.

One exception is in relation to the identification of a suspect or accused person.  Strictly speaking, the right to remain silent includes confirming one’s identity and basic personal information (mainly, date of birth) to the police. However, in many situations involving relatively minor offences, the police are not permitted to arrest the accused but instead, issue legal documents requiring that individual to come to court to answer the charges and then let the person go on their way. In such cases, if the person does not identify themselves, the police have the power to arrest in order to establish their identity, usually through fingerprinting.

Another example of an exception of the right to remain silent also arises in the area of motor vehicles.  Just as the police have the power to require motor vehicles to stop, they also have the power to demand the driver provide them with proof of registration and insurance, and allow them to inspect his personal driver’s license.  If the vehicle has been involved in an accident, in most jurisdictions the driver is also required to provide a statement as to what happened.  Failure to comply with these duties is a provincial offence. However, this applies only to the driver of a motor vehicle; passengers are fully entitled to remain silent and do not have to identify themselves unless the police have proper legal grounds to ask them to do so.

This demand is almost exclusively made as part of impaired driving investigations, and the general answer is “yes”.

In Canada, a police officer does not have the authority to randomly require an individual to stop and identify themselves or to answer police questions.

Police officers who have reasonable suspicions that a driver has alcohol in her body have the power to demand that she provide a “roadside sample” of her breath into a hand-held unit the police carry with them.  This device will indicate in very general terms whether the driver has alcohol in their system and roughly how much. The device analyzes the breath sample and provides readings of either “pass”, “warn” or “fail”.  A driver who blows a “fail” will then be arrested for “impaired driving”. The officer will then formally demand that the driver accompany the officer to an Intoxylizer device (usually back at the detachment) and provide samples of breath to be analyzed by that instrument.  This machine will provide an actual scientific numerical result which tells the officer the amount of alcohol in the bloodstream of the driver.  Anything over 80 milligrams of alcohol in 100 millitres of blood is against the law and a driver whose breath samples leads to such a result will then face a second charge, of “driving a motor vehicle with too much alcohol in his/her blood stream” (often referred to as “over 80”).

Because of the concerns about the frequently tragic results of impaired driving shared throughout Canadian society, Parliament has decreed that failing to provide a breath sample as demanded either at the roadside and/or for the purposes of the Intoxilyzer device, is also a criminal offence, to be punished in the same way as blowing a sample which is “over 80”.  A first offender will be fined a minimum of $1000 and will be prohibited from driving for a least one year. A second offence will lead to a minimum jail term of 30 days and a prohibition on driving for two or more years. A third or higher offence will lead to an automatic jail sentence of not less than 120 days and at least a three year driving prohibition.