Maybe you have a part-time job. Maybe your parents pay you an allowance. Maybe you make money shoveling snow or cutting grass. In any case, you’ve got money!

First step, where do you put this money? Have you outgrown your piggy bank? Maybe a bank account would be more appropriate!

If you are under the age of majority, some banks require your parent or guardian to be a joint account holder on the account.Banks in Canada must follow certain laws. Some banks are governed by Canada’s Bank Act – generally those with locations across the country. Banks with locations in one province must follow provincial banking laws. For example, the ATB Financial Act governs ATB Financial bank in Alberta.

Credit unions are similar to banks except that they are non-profit institutions. Customers must first qualify as a member and then become owners, meaning they share in any profits the credit union makes. The Bank Act regulates some credit unions. Provincial credit unions are regulated by provincial laws, such as Alberta’s Credit Union Act.

The Bank Act says that any natural person (an individual, not a company) can deposit money in a federally-regulated bank, regardless of whether they are allowed by law to enter into contracts. The underlined part is important. Canadian common law (judge-made law) says that individuals under the age of majority (in the province where they live) or who do not have mental capacity generally cannot enter into contracts. There are exceptions. Contracts are agreements between you and another person where you give each other something. But the Bank Act makes it clear that a minor can open a bank account even if they cannot enter into a contract. 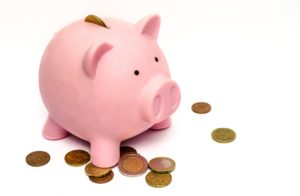 Photo by Skitterphoto from Pexels

If you are under the age of majority, some banks require your parent or guardian to be a joint account holder on the account. A joint account holder has the same rights to access your money and manage your account as you do, unless the bank allows for different controls. Some banks will let you open an account on your own if you are at least 12 or 13.

For example, let’s canvas a few banks and credit unions, both in Alberta and across Canada:

What about a credit card? Well, a credit card is a contract that is not to be taken lightly. To get a credit card on your own, you must be the age of majority in the province or territory where you live. In Alberta, that’s 18 years. If you are under the age of majority, the bank will require that your parent or guardian co-sign for the credit card. If you do not pay the money back, the person who co-signed will be responsible for repayment of all outstanding balances and debts.

Check with different banks about their rules for youth and the benefits of their youth accounts.

Have you heard adults in your life complaining about having to pay taxes? The government collects taxes on different things – income, goods and services (GST), property and more – to help pay for government services, such as healthcare facilities, education, courthouses, registry services, etc.

Filing a tax return means to report your income (and other amounts you earn) each year to the government. Income tax is tax on employment income. Employment income is amounts you receive as salary, wages, commissions, bonuses, tips and gratuities. Your employer deducts this tax from your pay cheque, along with amounts for Employment Insurance (EI) and Canada Pension Plan (CPP) contributions. By law, your employer must collect income tax and deductions. Look at your pay cheque to see if your employer is deducting these amounts.

Filing a tax return means to report your income (and other amounts you earn) each year to the government. The deadline to file taxes is April 30 of each year. You may be eligible for deductions (amounts you can subtract from your income) or credits (amounts subtracted from the amount of income tax you owe). The most common tax credit is the basic personal amount tax credit.

Employment income is amounts you receive as salary, wages, commissions, bonuses, tips and gratuities.Both federal and provincial governments have a basic personal amount tax credit. The effect of the tax credit is that individuals who earn income equal to or less than the basic personal amount (BPA) get back the income taxes they paid. Individuals who earn more than the BPA get a credit for an amount equal to the BPA multiplied by the tax rate for the lowest tax bracket. Math? I know, my brain hurts too. For 2020, the federal BPA is $13,229 for individuals with net income of $150,473 or less. The BPA decreases for individuals who earn more than that, with the lowest BPA being $12,298 for individuals with net income greater than $214,368. The Alberta BPA is $19,369. Individuals can apply both the federal and provincial BPA tax credits to lower the amount of taxes they owe. ATB Financial has an article called “Understanding your personal taxes in Alberta” with more detailed information.

So, do youth have to file tax returns? The Canada Revenue Agency’s website has a list of individuals who must file tax returns. If your employer has deducted income tax from your pay cheques but you make less than the BPA (combine the federal and provincial BPAs), then you may get back the taxes you have already paid. That’s a reason to file!

Taxes can be confusing! That is why accounting programs and accountants exist to help us! For a fee of course. Around tax season, there are also tax clinics that help people file their taxes for free. For more information on taxes generally, see the Government of Canada’s website and your province’s website.

Do you have other questions about laws that apply to youth? Check out CPLEA’s Law FAQs website for more information.