You are here: Home / Feature Articles / 38-3: When it Hurts to be Home / Domestic Violence, Renting and the Law
Reading Time: 5 minutes 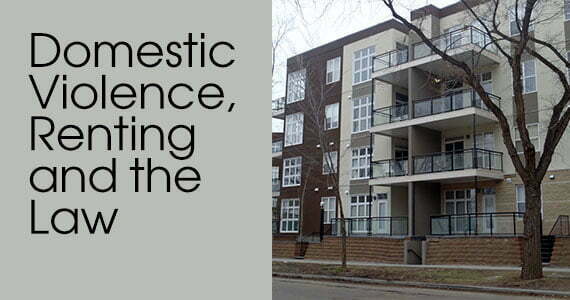 Homelessness is often a result of domestic violence (DV). When someone is fleeing violence at home, he or she needs somewhere to live and often has few or limited resources. There are additional difficulties if the person is a renter and either wants to remain living in the property, or is trying to find somewhere new to rent. Renting law impacts the options that the person has, and different provinces have taken different legislative steps to help with this problem. 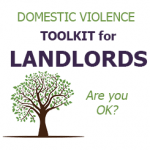 The relationship between domestic violence, residential tenancy law, and homelessness is interconnected. Several studies have identified a link between family violence and homelessness (including An Environmental Scan of Strategies to Safely House Abused Women and Family Violence and Homelessness: A Review of the Literature). The Edmonton based A Case Study: Retrospective Analysis of Homeless Women in a Canadian City  focused on two inner-city women’s shelters and found that “[h]aving abusive relationships and housing problems (62.3%) were the main reasons why women had come to the shelter” (p. 13). Included in the housing problems were issues associated with renting, including eviction.

There is a stigma attached to being a victim of domestic violence in the context of being seen as a desirable tenant in a residential tenancy situation.

Recent research by the Edmonton Social Planning Council and the Edmonton Coalition on Housing confirms that a bad rental history and lack of landlord references means that DV victims will have a difficult time finding stable housing. The Understanding Tenancy Failures and Successes  final report also identified that discrimination occurs on the basis of source of income: “When landlords found out tenants were on government income support (e.g. AISH [Assured Income for the Severely Handicapped], Alberta Works), there was often greater reluctance to rent them a unit” (p. 20). The Alberta government provides income support to women fleeing domestic violence situations, and based on the study, this funding could also be a basis for discrimination against the domestic violence victim. The same study identified the need for education on rental housing rights and responsibilities for those who were vulnerably housed and/or homeless and for the staff (the service providers or intermediaries) who provide the support services.

There is a stigma attached to being a victim of domestic violence in the context of being seen as a desirable tenant in a residential tenancy situation. In July 2006, the Canadian Mortgage and Housing Corporation released Housing Discrimination Against Victims of Domestic Violence. This research was undertaken to determine if landlords discriminate against battered women. The results of the study suggested that landlords do discriminate against battered women and that “a substantial number of landlords were surprisingly candid in their unwillingness to rent to a battered woman and some were even openly hostile towards battered women” (p. 3). A victim is most vulnerable immediately after leaving the abusive relationship and trying to find somewhere new to live, which is also the time that the victims are faced with landlord discrimination.

There are different legislative approaches to help deal with the intersection of DV and rental housing. In the United States, the Violence Against Women Act prohibits publicly funded landlords from denying victims admission into housing and requires that leases explicitly state that domestic violence is not a legal reason to evict the victim of that violence. Some states also have laws to help victims; including requirements that the landlord change the locks within a set period of time if the victim has a protection order, and provisions that allow a tenant to break the lease if DV occurs (see Housing Rights of Domestic Violence Survivors: A State and Local Law Compendium).

In Canada, some provinces have special legal provisions to help domestic violence victims and some provinces do not. Quebec, Manitoba and Nova Scotia have all amended their residential tenancy legislation to include provisions that relate to breaking the lease if there is domestic violence. Generally speaking, if there is a fixed term tenancy, then neither landlords nor tenants can end the tenancy early if they are both meeting their obligations under the agreement. The changes to Nova Scotia’s Residential Tenancies Act and Manitoba’s Residential Tenancies Act allow a fixed term tenant to break the lease and move out when the tenant receives a certificate from a designated victim services office.

In Alberta, the Centre for Public Legal Education Alberta has partnered with the Faculty of Extension at the University of Alberta to explore the legal context of female victims of domestic violence in relation to rental housing in Edmonton, Alberta. We are in the process of identifying:

The end result will be a research report, with recommendations and suggestions for possible legal reforms.

The relationship between domestic violence, residential tenancy law, and homelessness is interconnected. Several studies have identified a link between family violence and homelessness.

We have interviewed key informants from the community, and held focus groups. We are in the last months of the research. The service providers that we have consulted have identified rental housing issues as a major problem that their clients face every day. Many of the women end up being penalized when they leave their rental property because they do not provide adequate notice. There is no mechanism to remove their name from the lease, so the victim ends up being responsible for rent that is unpaid, as well as physical damages done to the unit, after she leaves. Once tenants have broken a lease, they are usually considered to have a bad rental history, and have trouble finding new accommodation without references from previous landlords. There is also no mechanism that would allow the tenant to remain in the property and remove the abuser’s name from the lease.

Many of the service providers also  identified the policies of subsidized housing providers as being a barrier for their clients. If a victim leaves the property and then the abuser causes damage to the property or doesn’t pay the rent, then the victim is held financially accountable for those breaches. Until the tenant clears the debt, they remain ineligible for that organization’s subsidized housing. One tenant was evicted because the abuser, whom she had a protection order against, showed up at the property and caused damage. She was evicted by the landlord because of the damage, and the eviction was upheld, even though the tenant herself had not caused the damage and had sought an order to keep the abuser out.

The final report will be submitted in February, and will be made available to the public. If you want to know more information about the research project, you can contact me at rochelle[at]cplea.ca. The research project is being funded through the Government of Canada’s Homelessness Partnering Strategy through Homeward Trust Edmonton’s Community Research Projects.