A Website of The Centre for Public Legal Education Alberta
You are here: Home / Feature Articles / 42-3: Children in the Justice System / Finding the Best Ways Forward: Report on the Symposium on Children’s Participation in Justice Processes
Reading Time: 4 minutes 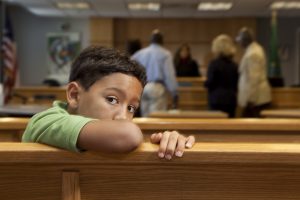 In mid-September 2017, the Canadian Research Institute for Law and the Family and the Alberta Office of the Child and Youth Advocate (“OCYA”) hosted an innovative two-day national symposium on children’s participation in justice processes in Calgary, Alberta. The symposium brought together leading stakeholders from across Canada, including judges and lawyers, mental health professionals, and government justice employees to talk about how children and youth are heard, how their interests are protected and how their evidence is received in justice processes. The symposium was intended to generate innovative proposals for policy reform, best practices, and recommendations for future research about children’s participation in justice processes.

As would be expected, the older the child was, the more likely respondents were to report that their preferences should be weighed heavily. The symposium included important plenary presentations by keynote speakers Sheldon Kennedy, the lead director of the Sheldon Kennedy Child Advocacy Centre, and Dr. Nicole Sherren, the scientific director and senior program officers of the Palix Foundation, as well as Del Graff, the Alberta Child and Youth Advocate, the OCYA’s youth panel and the Honourable Kathleen Ganley, Alberta Minister of Justice and Solicitor General. Those leading the workshops that made up the core of the symposium included Professor Nick Bala, Dr. Rachel Birnbaum, the Honourable Donna Martin QC, Dr. Francine Cyr, Patricia Hébert QC, Dr. Stephen Carter, the Honorable Justice Gillian Marriott, Dale Hensley QC and many others, all highly-regarded professionals.

The workshops held at the symposium covered a broad range of topics on the theme of children’s participation in justice processes, including:

A total of 179 individuals attended the symposium, hailing from all parts of Canada save New Brunswick. The presence of so many people involved in one way or another with the family justice system gave the Institute a unique opportunity to sample the views of attendees on children’s participation in justice processes, and an electronic survey on these issues was completed by 102 participants.

To give a sense of those completing the survey, about four-fifths our respondents were women (81.2%), and most said they mostly work in Alberta (64.7%), which was not surprising given that the symposium was held in Alberta. Most other respondents came from British Columbia (12.7%), Ontario (12.7%), Saskatchewan (3.9%) and the Northwest Territories (2.9%). Almost two-thirds of the participants were lawyers (64%), 7% were mental health workers, and about one-quarter (24%) worked in other occupations, including as academics, government workers, and mediators. On average, participants reported working in their primary occupation for 19.1 years, although their responses ranged from 1.5 years to 45 years.

Most respondents agreed that children should have the right to voice their views in family law proceedings that affect them (93.1%). When asked if children’s participation should be mandatory, however, 58.4% said that they disagreed, 30.7% said that they agreed, and 10.9% said that they didn’t know.

We also asked participants about the factors that should affect the legal weight to be given to children’s views, the extent to which a judge should rely on a child’s views in making a decision. More than 90% of respondents viewed the age of the child (93.1%), the ability of the child to understand the situation (93.1%), and the ability of the child to communicate (92.2%) as important factors. More than 80% of respondents viewed an indication of parental coaching or manipulation (87.3%), the child’s reasons for the views (86.3%), and the child’s emotional state (83.3%) as important factors to be considered.

The symposium was intended to generate innovative proposals for policy reform, best practices, and recommendations for future research about children’s participation in justice processes.

A number of other interesting results came from our survey of symposium participants. The complete report is available from the publications section of the Institute’s website at crilf.ca/publications.htm. Workshop materials are publicly available and remain online at the symposium website at findingthebestwaysforward.com.

The symposium was generously funded by contributions from the Alberta Law Foundation and the Office of the Child and Youth Advocate, with additional support provided by Our Family Wizard, DivorceMate Software, ChildView and the Federation of Law Societies of Canada.