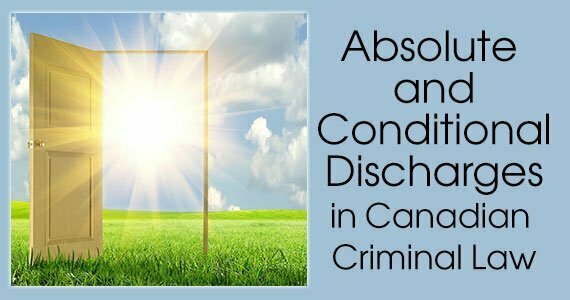 The principles of criminal sentencing are set out in Section 718 of the Criminal Code.  In Canada, the fundamental purpose of sentencing is to facilitate respect for the law and to promote a just, peaceful and safe society.  Sentencing pursues these six objectives:

Deterrence – a sentence dissuades the convict and others from repeating the offence;

Separation – this punishes the offender through deprivation of contact with friends, family and others, while protecting society from the offender at the same time;

Rehabilitation – offenders are offered programs and therapy that may help them to change their lives and turn away from criminal behaviours, an objective which is thought to be most effective with young offenders;

Responsibility – offenders must sincerely consider the harm done by their behaviour.

A person convicted of a crime in Canada will receive one of the following dispositions:

An individual may be discharged if it is in the best interest of the individual and if it is not against the public interest.  The effect of a discharge is that the accused does not receive a criminal conviction or a criminal record.

In this article we explain the criminal sentencing law of absolute and conditional discharges.

After an accused person has been found guilty by a plea or conviction after trial, a discharge may be granted by the state.  This nullifies any criminal record that the guilty person otherwise would have had.  Section 730 (1) of the Criminal Code states:

Where an accused, other than an organization, pleads guilty to or is found guilty of an offence, other than an offence for which a minimum punishment is prescribed by law or an offence punishable by imprisonment for fourteen years or for life, the court before which the accused appears may, if it considers it to be in the best interests of the accused and not contrary to the public interest, instead of convicting the accused, by order direct that the accused be discharged absolutely or on the conditions prescribed in a probation order made under subsection 731(2).

An individual may be discharged if it is in the best interest of the individual and if it is not against the public interest.  The effect of a discharge is that the accused does not receive a criminal conviction or a criminal record.  This makes a discharge very advantageous for first-time offenders and those guilty of minor offences.

The Ontario Court of Appeal sought to interpret and apply what “best interest of the accused” means in Regina v. Sanchez-Pino, 1973 CanLII 794 (ON CA):

… that deterrence of the offender himself is not a relevant consideration, in the circumstances, except to the extent required by conditions in a probation order. Nor is his rehabilitation through correctional or treatment centres, except to the same extent.  Normally he will be a good person of good character, or at least of such character that the entry of a conviction against him may have significant repercussions

A discharge is granted to an individual, otherwise an upstanding member of society, who would be significantly harmed by a criminal record.  To be considered in the best interests of the accused, the conviction and criminal record must have significant repercussions on the individual.  This need not necessarily be employment-related, although overall financial and non-financial costs are a factor.  If the conviction would “have a prejudicial impact on the accused disproportionate to the offence committed,” [1] a discharge is an appropriate disposition.  Professional hockey player Todd Bertuzzi pled guilty to an assault causing bodily harm on Steve Moore during a regular season NHL hockey game and was granted a conditional discharge. (R. v. Bertuzzi, 2004 BCPC 472 (CanLII))

In R. v. MacFarlane, 1976 ALTASCAD 6 (CanLII), the court said discharges should be used sparingly. If the conviction would “have a prejudicial impact on the accused disproportionate to the offence committed,” [1] a discharge is an appropriate disposition. A criminal sentence is one of the strongest deterrents to criminal activity, particularly for those who have no records.  The court set out the relevant factors for discharges:

It is obvious that a discharge will be preferred by all criminals.  Virtually everyone would benefit from a discharge over a conviction.  Only when the sanctions would be disproportionately out of line for the accused is a discharge an option.  If so, the second test about public interest is analyzed.  Again, according to the Sanchez-Pino case:

One element thereby brought in will be the necessity or otherwise of a sentence which will be a deterrent to others who may be minded to commit a like offence – a standard part of the criteria for sentencing.

… it is common sense that the more serious the offence, the less likely it will appear that an absolute discharge, or even a conditional one, is ‘not contrary to the public interest.’  In some cases, the trivial nature of the offence will be an important consideration; in others, unusual circumstances peculiar to the offender in question may lead to an order that would not be made in the case of another offender.

The severity of the criminal behaviour is a major factor in the discretion to order a discharge.  In R. v Fallofield [1973] BCCA the court determined that the accused was of good character and had no previous convictions.  The court found that the weight of the public interest (deterrence and separation) did not prevent the accused from receiving a discharge.

In R. v. Knowlton, 2005 ABPC 29 (CanLII), the court confirmed that conditional discharges can be granted even for cases involving violence.  Regarding the accused, the court said:

this individual has moved considerably to become a better person, reunited with his family, stopped consuming alcohol and drugs and is moving towards furthering his education in hopes of becoming a teacher.  It is in the public interest overall that he achieve those goals and a discharge may, to some extent, assist in that regard.  He does not have a recent record and entered a guilty plea and clearly is remorseful for his actions.  In all the circumstances, in my view, the need for deterrence in the context of this offence is adequately addressed through a conditional discharge.  It is in his interests and his family interests that he continue on the road to rehabilitation.

The common conditions contained in a probation order are:

Guilty persons granted discharges can claim they have not been convicted of an offence and have no criminal recordAbsolute discharges pardon the individual where the crime is not too severe, where conviction and further sentence would disproportionately impact the individual in relation to the wrongdoing, and where the discharge is in the best interests of the individual and not against public policy..  The federal Criminal Records Act states that “no record of a discharge under . . . the Criminal Code . . . shall be disclosed to any person, nor shall the existence of the record or the fact of the discharge be disclosed to any person, without the prior approval of the Minister” after one year has elapsed since the offender was discharged absolutely; or after three years since the offender was conditionally discharged.

An exception occurs where an accused enjoyed a previous discharge, especially on a similar offence.  In that case, the Crown may raise the previous discharge with the court.  The previous discharge cannot be used as evidence to convict the individual for the new offence, but only to show thecCourt that a discharge has been given in the past and the public interest might not be served with another one.

Just as what is viewed as ‘criminal’ changes with society over time, criminal sentencing also changes with evolving social norms.  One of these social justice principles is that no guilty person should be punished disproportionately to his fault.  In rare cases, the sentencing objectives of denunciation, deterrence, separation, rehabilitation, reparation and responsibility can actually be met by discharging the guilty person from further criminal responsibility.  The process and effect of being caught and brought to justice for the crime may be all that is necessary to achieve these objectives.  Anything more may not only serve no further sentencing purpose, but it may harm the accused’s and public’s interests.  This judicial discretion and flexibility in the system, is codified in Canadian criminal law and procedure.

Discharges are a form of discretionary sentences that address the guilty person’s character and personal circumstances, and balance those with his behaviour and consequences on the community.  Absolute discharges pardon the individual where the crime is not too severe, where conviction and further sentence would disproportionately impact the individual in relation to the wrongdoing, and where the discharge is in the best interests of the individual and not against public policy.  If the offence is minor in nature or consequence but the individual would lose much with criminal conviction and sentence, it would be disproportionate.

Conditional discharges do not immediately pardon an individual of guilty criminal behaviour.  It places the burden on the individual to prove oneself over time and in specific terms.  If the probation orders are fully performed, the individual is absolved of the offence.

Sean Callbeck is an MBA student at the Haskayne School of Business, University of Calgary (2014).

Brian Lines is majoring in law and society at the University of Calgary (2014).