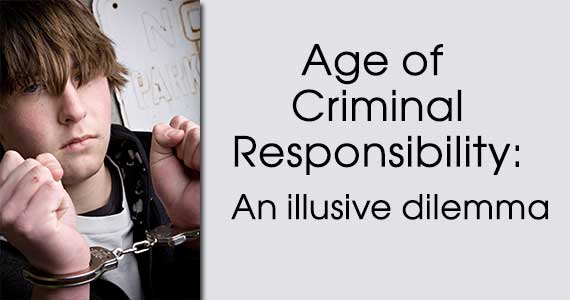 If we, as adults, reflect back on our youth, there is probably not one of us who can say we didn’t commit some type of infraction for which we could have been held accountable under the former welfare-oriented Juvenile Delinquency Act (JDA) – in effect from 1908 until 1984 – or the more legalistic approach of the Young Offenders Act (YOA) – in effect from 1984 to 2003. However, self-report studies introduced in the mid-1950s have repeatedly shown that most of us were never formally apprehended during those formative years of our life. This phenomena is the “dark figure” of (youth) crime and has both an indirect and direct bearing on the age young persons should be held criminally responsible (i.e., mens rea) for their alleged infraction(s) and perhaps equally important – how they should be dealt with.

I think that it should be 10 and up because kids get away with a lot.   – A comment from Oakwood just prior to the enactment of the YCJA (The Great Youth Criminal Justice Act Debate).

Considering the tragic 2013 killing of a six-year-old Saskatchewan boy (fortunately, a rare case) by a legally underage youth known to police. Under today’s legislation, the offender could not be held criminally responsible even though known to police. Yet prior to 1983, when the lower age limit of criminal responsibility (based on common law) was seven instead of 12, the killer could have been held accountable. As noted American psychologist Lawrence Kohlberg (1927-1987) determined, mental capacity is NOT the same as moral capacity – the ability to appreciate the meaning of one’s actions.  However, in a number of countries where there is no lower age limit of criminal responsibility, the accused youth could still be legally processed. Furthermore, even though the YOA set a maximum age of juvenile responsibility at 17 in 1984, Alberta’s maximum age remained 16 for boys and 18 for girls until 1985. (Ironically, research has shown that girls mature at a younger age than boys!) Needless to say, one doesn’t need to look too far afield to garner the history of controversy surrounding minimum and maximum ages of juvenile responsibility. Some additional context is in order.

On what basis was the minimum age raised in 1984? It was based on the fact that most children leave elementary school and are thought to have the mental capacity to understand right from wrong at around age 12. Yet, completing elementary school has no direct correlation to whether a young person meets the legal benchmark of what qualifies as mens rea. As noted American psychologist Lawrence Kohlberg (1927-1987) determined, mental capacity is NOT the same as moral capacity – the ability to appreciate the meaning of one’s actions. As early as the 1760s, the esteemed English lawyer Sir William Blackstone (1723-1780) argued there was a legal justification for differentiating criminal responsibility between “infants” (up to the age of seven) and “adults”. According to Kohlberg’s model of moral development, the general level of moral reasoning that meets the legal standard of mens rea does not occur until around stages four (Authority and social-order-maintaining orientation) and/or five (Social contract orientation). Various research studies show that few children reach stage three even in junior high school and typically stages three and four don’t begin to express themselves until high school (average age of entry around 15!). As Kohlberg’s generally accepted stages are known to have to be experienced in total and in order, these facts alone should raise serious questions among legal scholars and social scientists who study at-risk youth about how we determine a minimum age of responsibility. Failure to do so is an injustice to young persons.

A ‘good’ idea without any teeth

Despite the 1948 UN Universal Declaration of Human Rights, and more specifically the 1990 CRC [1], the debate about minimum age of criminal responsibility has not been universally embraced. With the new amendments to the Youth Criminal Justice Act, it became easier to try young offenders as adults – a direct contravention of the CRC. This may, in part, be due to the fact that the UN conventions do not specifically identify a minimum age. Section 10 of the CRC simply requires parties to establish a:

“…minimum age below which children shall be presumed not to have the capacity to infringe the penal law” (Art 40(3)(a).”

“In those legal systems recognising the concept of the age of criminal responsibility for juveniles, the beginning of that age shall not be fixed at too low an age limit, bearing in mind the facts of emotional, mental and intellectual maturity.”

In the UN’s 10-year report commemorating Canada’s ratification of the CRC, we received a failing grade. However, the report noted that until 2012 Canada had been complying with the CRC guidelines. Why the change? With the passing of Bill C-10 came new provisions for stiffer penalties for young offenders.  With the new amendments to the Youth Criminal Justice Act, it became easier to try young offenders as adults – a direct contravention of the CRC. The UN report further pointed out there was no child rights assessment or mechanism to ensure the Bill’s conformity with CRC provisions. Finally, the UN committee report also pointed out that ethnic minority and Aboriginal youth still continue to be over-represented in the youth criminal justice system.

Although the UN report does not offer any criticism about the minimum age of responsibility, the fact is that the new legislation potentially puts underage youth at risk of being directed to the youth/adult system under the umbrella of parens patriae.

Conclusion: Where to from here?

This article draws attention to several key issues that demonstrate the lack of a clear rationale or justification for setting a minimum age of criminal responsibility. This is due in part to the contradiction inherent in the criminal justice system (CJS). As I described in a previous article in LawNow, the CJS is a mix of classical criminological ideals (rule of law) vs. the back-end of the system (sentencing and corrections), that embraces a positivist criminological perspective. The matter is also compounded by the fact that despite various international conventions, every state retains considerable discretion in setting its own minimum age of criminal responsibility.  While the intent of trying to protect young people from being held accountable when they may not be able to appreciate the implications (i.e., moral character) of their actions is laudable, the fact that the law has not/does not allow itself to be informed through social science evidence continues to raise serious doubts about the justification for what, if any, fixed age is justifiable. For example, as implied in this article, accountability does not always necessitate criminal responsibility. In the meantime, much could be learned by examining how other youth justice models and CJSs have approached the issue. [2]

1. The United States signed but did not ratify the Convention. However, the CRC is the most ratified of all the UN Human Rights conventions and it is a binding international treaty.