A Website of The Centre for Public Legal Education Alberta
You are here: Home / Special Report / 37:1 Sex and the Law / Cry for me Argentina! The Commercial Sexual Exploitation of Children in South America
Reading Time: 5 minutes 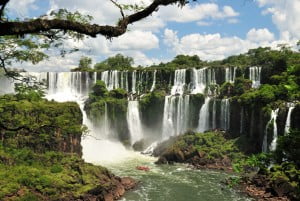 Visitors to South America’s spectacular Iguazu Falls say you start to hear the roar kilometers away. The falls – actually a series of 275 individual cascades and waterfalls that drop up to 82 metres into a gorge below – are located along the rim of a crescent-shaped cliff that stretches for nearly three kilometers. The borders of three countries, Argentina, Brazil and Paraguay, meet here. The Iguazu Falls lie at the tip of a strip of Argentinean territory that, on a map, resembles a crooked finger jutting away from Argentina’s main land mass, with Brazil to the east and Paraguay to the northwest. Long considered to be one of the world’s natural wonders, when United States First Lady Eleanor Roosevelt visited them some time prior to the Second World War, she is reputed to have quipped “poor Niagara.” The allusion was to a pair of massive waterfalls more familiar to North Americans: the two Niagara Falls straddling the international border between the Canadian province of Ontario and the American state of New York.

The Iguazu Falls and surrounding area is one of the most renowned natural tourism sites in South America, attracting hundreds of thousands of visitors every year. However the area is also the site of a different kind of traffic. Because of lax border controls, the porous borders in this tri-state region make for a smuggler’s dream. There is a steady flow of people and goods. Among the blend of cheap electronic goods, jewelry and clothing is an illicit trade in drugs, stolen vehicles and car parts, weapons and even people. Both INTERPOL and the Federal Bureau of Investigation have identified the Paraguayan city of Ciudad del Este – which lies across the Parana River from Brazil and is joined by the Friendship Bridge – as having a major problem with illicit trade. Some estimates place this underground economy as worth up to five times Paraguay’s national economy. Various international intelligence and national security agencies have suggested that some of the proceeds from this illicit trade have been supporting criminal gangs located outside the region, including groups that advocate and practise political terrorism. This article focuses on the trafficking of underage minors and children for sexual purposes.

As of the date this article was written, every member of the United Nations, except for the United States and Somalia, had ratified the United Nations’ Convention on the Rights of the Child. Yet, horrible abuse of children continues, and one of the most heinous examples of this is child sex prostitution and the international trafficking of children for the purposes of sex. According to the United Nations’ International Organization for Migration (IOM), human trafficking in the tri-state region around the Iguazu Falls chiefly involves women, teens and children. Studies for the IOM have shown that young women are usually trafficked for sexual purposes across the borders for short stays of anywhere from a few hours to a day or two. Research projects have also estimated that roughly 6000 unaccompanied children and teens cross the Friendship Bridge between Brazil and Paraguay each year. These young people are at risk of being kidnapped and forced into, or otherwise falling into, the sex trade. Many of them are illiterate and come from extremely poor families in rural areas. Many of these children and minors have had to flee abuse and violence within their homes and have been obliged to move to the cities of the tri-state region to look for work. The incidence of sexual exploitation is staggeringly high. According to a Brazilian children’s advocacy group called Sentinela,(a Portuguese word meaning “sentry” or “guard”) which has an office in the Brazilian border city of Foz do Iguacu, of the 489 children it assisted between the years 2002-07, 410 of them (representing 90% of the girls between the ages of seven to 18) were victims of sexual exploitation. Furthermore, according to Argentinean immigration officers, out of the dozens of girls and young women it assisted between the years of 2004-07 in the border city of Puerto Iguazu, almost all of them were Paraguayan girls or young women who were destined to be shipped to brothels or night clubs in Argentinean cities further south, including Buenos Aires and Cordoba.

Argentina, as a party to both the Convention on the Rights of the Child and a protocol called the Optional Protocol on the Sale of Children, Child Prostitution and Child Pornography, is obligated under international law to implement programmes and policies that would inhibit the trafficking of children and under-aged youth. However Argentina continues to be the source of a lot of the trafficking in the region, largely because of a lack of resources to address the problem and because many law enforcement and border control officials continue to be complicit in the trade. A reading of media reports about the commercial sexual exploitation of children and the various reports from United Nations’ agencies and non-governmental organizations about the issue reveals that the problem is not lack of awareness. Rather, it is the lack of investigatory and prosecutorial resources and initiatives devoted to rescuing children and minors who are caught up in the trade.

This paucity of resources to address the problem is not just an issue for emerging regional economic powers like Brazil and Argentina, both of which still struggle with widespread poverty. There is also the failure of wealthier countries within the G20 (such as Canada) to allocate adequate resources to investigate so-called “sex tourists” and then bring them to justice within their domestic legal systems. Countries, rich or poor, are failing in their own fashion to live up to their obligations under international law. More than 20 years after the international community brought its focus to the universal rights of children when the UN Convention on the Rights of the Child came into force, many of the world’s children continue to live lives that are anything but safe and in accordance with the values and requirements set out in that Convention. In addressing the situation in Argentina, I am in no way suggesting that Argentina’s situation is an isolated, aberrant case: child trafficking for sexual purposes or for cheap labour is an international problem. Argentina is, however, a well-documented, significant destination for “sex tourists,” the overwhelming majority of who are adult males from North America and Europe. A Canadian sociologist named Richard Poulin who has studied the international sex trade says that the trade has grown larger and more complex over the last two decades. According to Poulin, human traffickers, all of whom are connected to networks of organized criminal gangs in some way, are responsible for transporting around anywhere from one to four million women and children every year, with the majority of these people destined for the sex trade. “They are being treated as merchandise for the sex industry. They are new and raw resources,” Poulin says, in a degrading trade that he has called the “feminization of migration.”

Outside of the minority of countries which have well-entrenched systems of rule of law the world is still very much a Hobbesian place. The protection accorded to children on paper is not the reality. And the ugly reality is that the customers for the most vulnerable among us come from those very countries that have the rule of law; Canada among them. The trafficking of children for sexual purposes reveals an international economic system of supply and demand at its basest and most amoral: those with a need that would land them a prison sentence and social shunning in their home countries if caught fly to places where children and young people are sold by their own families into a shadowy world that everyone knows exists, yet continues in spite of the best-intentioned of laws and international conventions.

Brian Seaman has been a past contributor to LawNow Magazine. He is a freelance writer and legal researcher.