A Website of The Centre for Public Legal Education Alberta
You are here: Home / Sections / Famous Cases / Your Land is My Land: Reeder v Woodward
Reading Time: 5 minutes

[T]he appellants … were, after all, the registered owners of the disputed parcel, which the respondents have now acquired through adverse possession. The litigation was necessary to resolve this dispute, even though it was undoubtedly expensive and unfortunate for both sides.

Adverse possession, also known as “squatters’ rights”, is an old common law doctrine where one may acquire ownership to another’s land by simply occupying it for a certain period of time. Since the supply of land is limited, the theory is that those who need it and can best use it should own land. 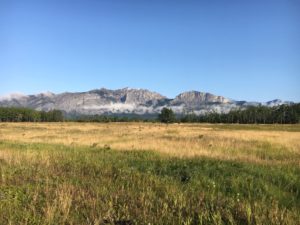 From the mid-1500s to the 1800s, recovering one’s land from a “squatter” or occupier was subject to a 60-year limitation period. Occupiers who could show actual possession of the land for that time could keep the land. Lawmakers reduced this limitation period to 20 years in 1833 and then to the current 10 years in Alberta.

The Land Titles system tracks and assures title (ownership) to land through the Land Titles Act. Formal registration of documentation provides landowners certainty in ownership of their land. Registered owners have priority over all others claiming ownership. The system tracks and digitally stores all interests and changes to land ownership. It operates on the mirror principle (the register always reflects actual ownership) and the curtain principle (the register is complete on its face so no one needs to verify historical records).

Adverse possession claims are not documented or registered in the land titles system. They represent a common law exception to the legislative framework and the mirror and curtain principles. Adverse possessors may have their claims validated by judges and then entered on the title to the land.

“Adverse” means that occupation of the property must be without consent of the registered owner. This occupation is basically trespass. The elements of adverse possession are:

The Reeder family has owned land at Cardston, Alberta for several generations. In 1972, the county upgraded Highway 501 running just south of the property boundary line between William Reeder’s farmland and neighbour Dennis Vadnais’ land. The construction created a remnant that separated 9.5 acres of Vadnais’ land next to the Reeder property. The Vadnais-owned strip was now divided by the newly built highway and surrounded by a fence. Although the land did not belong to them, the Reeders improved the parcel of land and regularly grew hay and pastured cattle on it. Vadnais knew of this. The neighbours never discussed the issue. The disputed strip of land is worth about $30,000 today.

In 1999, Robert and Lorraine Woodward purchased the Vadnais land, knowing of the Reeders’ occupation of the 9.5 acres. Eleven years later, in 2010, the Woodwards claimed the disputed strip belonged to them and built a new fence to separate the Reeder land, creating three distinct fenced slices of land. They guarded the area and blocked Reeder access to the land. The Reeders filed a caveat for adverse possession, and the Woodwards counterclaimed for repossession.

Adverse possession claims are not documented or registered in the land titles system.The Woodwards argued a lawful entitlement of the land based on a three-way agreement reached in 1972 between the county and the landowners. However, there was scant evidence of such contract for which the judge could make clear affirmative findings of fact. The judge found the Reeders’ adverse possession was exclusive, continuous, open, visible and notorious when the Woodwards purchased the property on May 5, 1999. While there were “neighbourly attempts” to reclaim the land, no actions were brought until 2011, two years after expiration of the statutory 10-year limitation period. The judge awarded the Reeders title by adverse possession of the 9.5 acres. The trial judge also awarded damages of $20,280 for lost hay production and solicitor and client costs. The Woodwards appealed.

The Court of Appeal agreed that Alberta’s Limitations Act extinguished the Woodwards’ ownership in the disputed land. Section 3(6) of the Act reads:

The re-entry of a claimant to real property in order to recover possession of that real property is effective only if it occurs prior to the end of the 10-year limitation period provided by subsection 1(b).

The appellate court observed that the Woodwards lived in the area and knew of the Reeder’s occupation of the land even before purchase. Furthermore, the Reeders consistently asserted their occupation of the disputed land for more than 10 years. The $20,280 damages award was set aside because proof of that loss was inadequately established. The legal, financial and personal costs substantially exceeded the value of the disputed land.

Many criticize adverse possession as unfair and a violation of registered landowner rights. The Reeder v Woodward case was controversial. Some called for the doctrine to be abolished as it serves no purpose in modern society where settling and conquering is a thing of the past.

Adverse possession, also known as “squatters’ rights”, is an old common law doctrine …In 2019, the Alberta Law Reform Institute released a report titled Adverse Possession and Lasting Improvements to Wrong Land. The report recommended abolishing adverse possession. The amendment would eliminate the limitation period and allow property owners to recover their titled land at any time. It was based on a 2003 report which observed that most adverse possession cases fall into three categories:

The Alberta government did public consultation in October 2019 as to what should be done with adverse possession. As of date of publishing, the government has not yet made a decision.