A Website of The Centre for Public Legal Education Alberta
You are here: Home / Feature Articles / 44-1: Back to School / Gay-Straight Alliances
Reading Time: 6 minutes 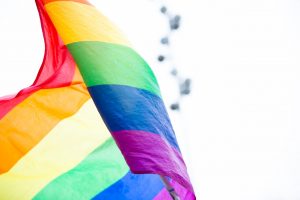 Gay-straight alliances (GSAs) are groups formed in schools and run by students with teacher support or sponsorship. The purpose of a GSA is to create welcoming, caring, respectful and safe spaces for LGBTQ2S+ (Lesbian, Gay, Bisexual, Transgender, Queer or Questioning, Two-Spirit, Intersex, Pansexual, Asexual, Androgynous) students and their allies. GSAs often work on advocacy, human rights and awareness projects to make their communities more inclusive. According to Calgary’s Centre for Sexuality, over 100 schools in Calgary and area have GSAs.

GSAs have sprung up in schools across the United States and Canada over the last thirty years. These groups have been formed mostly in response to some troubling statistics about LGBTQ2S+ youth. A 2011 Canadian survey revealed the following:

According to Ian Macgillivray (see: Gay-Straight Alliances: A Handbook for Students, Educators and Parents, 2007), gay-straight alliances ARE:

On the other hand, he notes that gay-straight alliances are NOT:

Bill 8: The Education Amendment Act will come into force on September 1, 2019.Studies conducted in schools with GSAs indicate that GSAs make schools safer for LGBTQ students by sending a message that verbal and physical harassment will not be tolerated. Further, LGBTQ students are less likely to miss school because of safety issues. GSAs also help LGBTQ students identify supportive school staff, which can have a positive impact on their academic achievement and experiences. (See Gay-Straight Alliances: Creating Safer Schools for LGBT Students and their Allies, GLSEN Research Brief.) In addition, the University of British Columbia concluded that GSAs in schools reduce the risk of suicide for all students.

History of GSAs in Alberta

Alberta Education has stated that students who attend schools with GSAs are far more likely to say that their schools are supportive of LGBTQ people. Students are more willing to reveal their sexual orientation or gender identity and see their school climate as becoming less homophobic. Other positive impacts reported by Alberta Education include:

In 2015, the Alberta government amended the School Act. The key amendments provided that:

Section 45.1(5) of the School Act set out requirements for these policies:

A code of conduct … must contain the following elements:

(a) a statement of purpose that provides a rationale for the code of conduct, with a focus on welcoming, caring, respectful and safe learning environments;

In 2018, a group of parents, private schools and two public interest groups started a lawsuit challenging the constitutionality of sections 16.1 and 45.1 of the School Act. They alleged that GSAs are harmful and expose children to inappropriate, sexually explicit information, as well as information about gender and sexuality that was harmful, ideological or harmful to parents’ and schools’ beliefs (at para 10). They also argued that the limitation on notifying parents would violate their Charter s. 7 rights (at para 11). The parties applied for:

Justice Kubik denied the injunctions on June 27, 2018. A majority of the Alberta Court of Appeal upheld this decision.

Changes to the Law

During the recent Alberta election campaign, the United Conservative Party (UCP) stated it would amend some of the GSA provisions (such as parental notification) and proclaim the previous Education Act (that existed in 2014 under the former government). Bill 8: The Education Amendment Act will come into force on September 1, 2019.

With respect to GSAs, the Alberta Government notes the main changes made by Bill 8 include:

There have been several protests against Bill 8. One concern with the proposed changes is that students will no longer be protected from being “outed” by their teachers to their parents. This can be a safety concern and could also prevent some students from joining GSAs. The new Education Minister, Adriana LaGrange, assured Albertans that existing privacy legislation will protect students.

There are two Alberta laws on privacy of personal information:

Both laws allow disclosure of personal information in the following situations:

Alberta’s Privacy Commissioner, Jill Clayton, released a “rare” statement outlining the privacy implications of the new GSA laws. The Advisory on Disclosing a Student’s Participation in a School Club (Advisory) states that public or private schools cannot disclose personal information except as allowed under FOIPPA or PIPA. Even where the disclosures are allowed under FOIPPA or PIPA, these disclosures are discretionary (schools are not required but are allowed to use their discretion in releasing the personal information). The Advisory notes that a student’s membership in a GSA is personal information to which FOIPPA and PIPA apply. Further, it sets out the provisions in FOIPPA and PIPA describing when personal information of students may be disclosed.

The Advisory highlights the complex privacy issues surrounding GSAs. Instead of barring absolutely the release to parents of information about their children’s membership in a GSA or attendance at a GSA function, teachers now decide whether they should tell the parents that a child has joined a GSA. This could discourage some youth from joining GSAs out of fear of not being able to decide themselves when to reveal their sexual orientation or gender identity to their parents. Arguably the students who need the most support from GSAs will not get it.