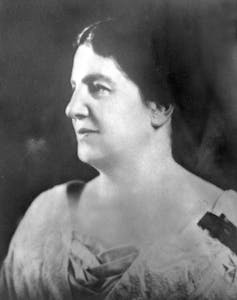 Emily Murphy is seen in this photo from the 1920s. (Creative Commons)

In 1923, when it became illegal to possess cannabis in Canada, very few Canadians would have heard of the drug, let alone tried it.

So why did legislators target weed?

Cannabis advocates have long blamed women’s rights activist Emily Murphy. Her 1922 book on the drug trade in Canada, The Black Candle, claimed that marijuana users “become raving maniacs” and “are liable to kill or indulge in any sort of violence.”

But even though Murphy’s drug activism played an important role in strengthening Canada’s drug laws in the early 1920s, the real reason cannabis was criminalized has much more to do with Canada’s attendance at international meetings.

In the early 1920s, the panic over drug use had much to do with the drive to ban Chinese immigrants from entering Canada. Drug crusaders like Murphy blamed Chinese opium sellers for leading Canadian youth to ruin. In a series of articles in Maclean’s in 1920, Murphy warned that drug-addled young women would give in to the sexual demands of Chinese men, leading to the birth of “mixed-race” babies.

In Vancouver, her articles helped give rise to an anti-drug campaign that went on for months. As a result, the federal government passed legislation increasing the minimum penalties for the possession of drugs to six months.

At roughly the same time, the government stopped virtually all Chinese immigration to Canada. But this drug panic had little to do with marijuana: It was squarely aimed at Chinese traffickers and users of opium.Even so, in the middle of this drug panic, Parliament added cannabis, not opium, to the schedule of restricted drugs. The exact reason remains a mystery.There was no debate in the House of Commons about the addition of cannabis. There are few records pertaining to the issue in Library and Archives Canada, and no mention of the decision in the media.

But controlling cannabis had been under international discussion for more than a decade, although it did not become part of an international convention until 1925, when the Geneva Convention limited Indian hemp to “medical and scientific” consumption.

In 1929, the assistant chief of Canada’s so-called Narcotic Division, K.C. Hossick, wrote that Canada had to include cannabis on the schedule of restricted drugs because Canada had ratified the Hague Convention. This was not true, as it was not until 1925 that cannabis came under international control, and Canada banned cannabis two years earlier. Even so, Hossick’s reference to the international treaties suggest the idea for adding the drug came from international discussions.

Much later, in 1974, Alexander B. Morrison, the assistant deputy minister of the health protection branch at Health and Welfare Canada, wrote: “It appears that Col. Sharman (chief of the narcotic division) returned from meetings of the League of Nations convinced that cannabis would soon fall under international control. In anticipation….he moved to have it added to the list of drugs controlled under Canadian law.”

While Murphy’s articles in Maclean’s created panic, the book attracted little attention. By this point, officials at the now called Department of Health had little respect for Murphy and likely weren’t taking her views seriously. What’s more, the marijuana chapter was a minor inclusion in a long book devoted to the problems of opium and cocaine.

There were no convictions for the possession of marijuana in Canada for 15 years and even then, they were unusual. The drug was rarely mentioned in the media until the mid-1930s, when the anti-marijuana, “reefer madness” campaign in the United States exploded, associating marijuana use with criminality, murder and insanity.

Even then, the drug attracted little attention in Canada.

In the 1930s, the RCMP requested landowners who were growing hemp as a windbreaker to destroy the plant. Almost none of them were aware of the potentially psychoactive properties of the weed.

In his autobiography, Clifford Harvison, a former RCMP commissioner, reported that one of the few protests came from an older woman who grew the plant to feed her canaries, who sang feverishly after their meal. When the RCMP tried to destroy the plants, she shooed them away with a broom. The police wisely retreated.

As late as the mid-1950s, a study of convicted drug criminals in British Columbia found that very few of them had ever tried the drug. It was not until the Baby Boomers came of age in the swinging 1960s that cannabis became a drug of choice.

Middle-class youth were outraged by the long sentences given out for marijuana possession, as were some of their parents. In 1969, amendments to the drug act made it possible for prosecutors to proceed by summary conviction.

This made it far more likely that possession of marijuana would be punished by a fine rather than a jail term and set us on the path towards legalization.

And so after this long and fascinating history, cannabis has become legal in Canada.

Catherine Carstairs is a Professor and Chair, in the Department of History, University of Guelph, Ontario, Canada.