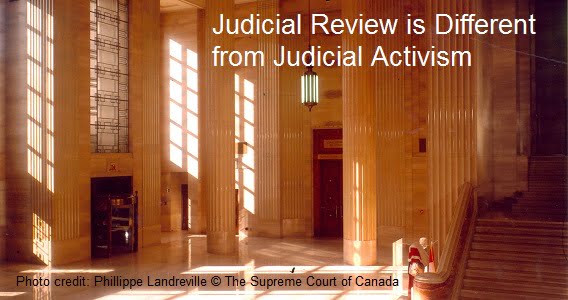 Since the enactment of the Canadian Charter of Rights and Freedoms in 1982, there has been much discussion about the proper role of judges and courts in our democratic system. Commentators have noted, and many critics have complained, that decisions made and laws passed by our democratically elected representatives in Parliament and our provincial and territorial legislatures have been struck down by un-elected judges. The most strident criticisms usually come from those who supported the challenged laws or government policies: they frequently allege “judicial activism” against judges who have made decisions upholding the rights and freedoms of individuals over state goals and actions.

What seems to be often overlooked or forgotten in the discussion and debate, however, is that judges have always had this role in our constitutional history and framework. Since 1867, when the British Parliament enacted the British North America Act (now the Constitution Act, 1867) our judges have had the duty to review the legitimacy of laws, and to strike them down as being invalid if they were contrary to the Constitution.

For the first 120 years or so after Confederation (that is, until the Charter became law in 1982) the most frequent reason for judges striking down legislation related to the legal authority of the legislative body which enacted the law in question. Since 1867, when the British Parliament enacted the British North America Act (now the Constitution Act, 1867) our judges have had the duty to review the legitimacy of laws, and to strike them down as being invalid if they were contrary to the Constitution. Under the Constitution Act, 1867 Parliament and the provincial legislatures were each given a specific list of areas in which they had exclusive authority to legislate and govern. Section 91 listed 29 particular areas in which Parliament had jurisdiction, including taxation, the postal service, military and maritime matters (including inland fisheries, ferries between provinces, and shipping generally), banking, aboriginal peoples, immigration, marriage and divorce, criminal law, and penitentiaries. Section 92 listed 16 areas in which provinces could legislate, including provincial taxation, local prisons, the establishment of provincial courts, municipal bodies, health care, provincial corporations, and enforcement of provincial laws by way of fines or imprisonment. Provinces were also granted powers over education, as well as general authority over “matters of a merely local or private nature in the province”. The federal Parliament had any and all other authority not granted specifically to the provinces, and in the case of true overlap or competing power, Parliament’s laws were considered supreme.

Inevitably, after 1867 clashes took place between the federal and provincial authorities as each occasionally attempted to enact laws which encroached upon the other’s domain. Perhaps the earliest such situation was finally decided by the Judicial Committee of the Privy Council in London (our highest court of appeal for the first 80 or so years after Confederation) in 1887, when it ruled upon an Ontario business tax law as it applied to banks (an area of federal authority). The Judicial Committee upheld the law and found it did not represent an improper provincial attempt to legislate in a federal area of jurisdiction. Over the many decades which have followed, the courts have been asked to rule in federal-provincial disputes in areas as diverse as the application of provincial labour laws to seaports (navigation and shipping are federal areas of power); payment of the provincial minimum wage to an employee at an airport (a federal jurisdiction); and in cases involving egg marketing, the manufacture of margarine, abortion rights and access, and wage and price controls enacted by Parliament. In some cases, governments have directly clashed about the legislative authority of each other, and in other situations individuals or corporations have challenged the validity of a law enacted by one level of legislature on the basis that the other level alone was competent to enact the disputed provisions

This power of “judicial review” of legislation by the courts was not restricted to situations involving competing jurisdictional claims by governments. Long before the Charter of Rights, individuals had challenged laws which infringed upon or denied them basic civil rights and liberties. One of the first — and certainly one of the most famous — was the so-called Persons Case which was decided in 1929. Five now famous Alberta women challenged the laws governing membership in the Senate which were, until then, being interpreted so as to exclude females from the meaning of “person”. After the Supreme Court of Canada ruled against them in 1928, they appealed further, to the Judicial Committee of the Privy Council, which decided that women were persons, and could accordingly be appointed as Senators and hold other public positions in Canada.

In some situations, rights-oriented challenges were based in disputes about legislative jurisdiction. In 1957, for example, the Supreme Court of Canada struck down a Quebec law providing for the padlocking of any house where communist ideas and propaganda might be discussed or distributed. In 1938 the Supreme Court struck down an Alberta law which required newspapers to publish government responses to criticism. The Court held that the law infringed upon the federal power to make criminal legislation, and that the provincially-enacted legislation was therefore invalid. Similar challenges were successfully brought against provincial laws governing slot machines and prostitution: the Supreme Court ruled these measures were also invalid for intruding into the criminal law sphere. One famous constitutional scholar has described the results as leaving gamblers and prostitutes “free to continue their activities”, at least in the absence of proper federally-enacted laws.

Another series of pre-Charter decisions led to the suggestion that, in Canada, there was an “Implied Bill of Rights”. In 1938 the Supreme Court struck down an Alberta law which required newspapers to publish government responses to criticism. Five of the six judges who heard the case ruled that free political debate and discussion were too important in a democracy such as Canada to permit a government to force newspapers to publish government opinions. …contrary to what we hear so often from politicians, lobbyists, and others who are not happy when a law is struck down by a court, judges were not granted truly new powers when the Canadian Charter of Rights and Freedoms was enacted in 1982. Some of the judges referred to the Preamble of the Constitution Act, 1867 which says Canada is to have “a Constitution similar in principle to that of the United Kingdom” and pointed out that in the U.K. Parliament operates only under the influence of open and critical public debate and opinion sharing. Free and public debate is, in the words of these judges, “the breath of life for parliamentary institutions”. For this reason, along with others offered by the judges, the Alberta legislation was struck down.

From time to time, the idea of an “Implied Bill of Rights” resurfaced in the years prior to the Charter of Rights being enacted in 1982. In the 1957 case referred to above in which the Quebec anti-communist “padlock laws” were ruled unconstitutional, some of the judges of the Supreme Court suggested that legislatures could  not enact laws which would restrict or curtail freedom of political speech.

Thus, contrary to what we hear so often from politicians, lobbyists, and others who are not happy when a law is struck down by a court, judges were not granted truly new powers when the Canadian Charter of Rights and Freedoms was enacted in 1982. A more accurate description would be that the areas in which we, as a society, asked courts to become involved were expanded and broadened. But at their heart, the powers and principles the courts have used under the Charter are essentially the same as what was taking place ever since Confederation. As with before, when now faced with a challenge to a law, judges must decide what the particular term of the Constitution being invoked actually means and addresses. …once judges have found a law to violate the rights or freedoms described in the Charter they must also go on to consider whether an acceptable justification for that violation has been proven by the government. They then must consider what the disputed law intends or accomplishes in relation to that right or interest. In many ways, this process replicates the pre-Charter situation, where the courts would be asked to decide the scope and meaning of the description of authority in the Constitution Act 1867, and then whether the challenged law was consistent with, or contrary to, that division of power.

Under the Charter, the courts may also now be required to apply a final standard before striking down a law which did not exist prior to 1982. Under the earlier constitutional regime (which still exists, by the way — a law may still be challenged on the basis that it was enacted by the wrong legislative body) a finding that a law had been improperly passed by a legislative body usually meant the exercise was ended: the law was declared invalid and could only be resurrected if the proper level of authority acted. Now, however, once judges have found a law to violate the rights or freedoms described in the Charter they must also go on to consider whether an acceptable justification for that violation has been proven by the government. Where a government wishes to have a law upheld even though it violates constitutional rights or freedoms, it has this opportunity to explain and demonstrate why it is necessary to override the other protections of the Constitution. Section 1of the Charter sets out the test to be applied, and says that infringements of rights and freedoms may be acceptable if those violations can be “demonstrably justified in a free and democratic society.”

Far from being contrary to notions of Parliamentary democracy, this final step acts as an extra protection for both democratic principles and individual rights. First, only where the government wishes to have a chance to defend or justify a law will the court embark upon such an enquiry. Sometimes governments decide there is no possible way to justify a particular infringement of rights and they do not ask a judge to make a ruling upon this question.

Where a government wishes to have a law upheld even though it violates constitutional rights or freedoms, it has this opportunity to explain and demonstrate why it is necessary to override the other protections of the Constitution. It must show the court the importance of the goals or objectives Parliament or the provincial legislative body was trying to achieve, and it must demonstrate that the impact on protected rights or freedoms is appropriate and acceptable given the competing interests involved. If it succeeds in this exercise, the law will be upheld by the court. If the government in question cannot defend and justify the law, it will be struck down for being unconstitutional. (And even then, Parliament and the legislatures have the final say, because Section 33 of the Constitution Act, 1982 give them the power to declare a law will remain effective even if it is contrary to most of the Charter of Rights and Freedoms.)

Thus, contrary to so many of the complaints and criticisms we sometimes hear, judicial review of disputed government actions and legislative enactments is not contrary to our democratic and constitutional values and history, but in fact, actually consistent with them! Having laws which bind all members of society equally — The Rule of Law, in other words — requires having courts which can impartially interpret and enforce those laws, and rule upon disputes which arise about their basic constitutional validity.