In November, more than 11,000 scientists declared that the climate emergency has arrived and drastic action is required. Frustrated by government failure to respond adequately, citizens are taking to the courts.

The Sabin Center for Climate Change Law reports at least 1,390 legal challenges to governments and fossil fuel corporations in more than 25 countries since 1990. These cases are forging a new legal discipline: climate change law.

In October 2019, a second Canadian challenge was launched: La Rose vs. Her Majesty the Queen, filed in Federal Court.At the head of the pack is the landmark case Urgenda vs. The Netherlands. In 2015, the district court of The Hague decided the government has a legal duty to strengthen its emissions reduction target for 2020.

The court of appeal reaffirmed the decision in October 2018. Although the case is on appeal to the Dutch Supreme Court with a final ruling due on Dec. 20, the case has already changed government policy.

In the past year, millions of children and teenagers around the world have crowded the streets to protest government inaction on the climate crisis. But youth are also increasingly in the courts, suing governments for their failure to preserve a healthy environment for current and future generations of children.

In United States, the most prominent case, Juliana vs. United States, was filed in 2015. In it, 21 young people assert that the U.S. government, by aggravating climate change, has violated constitutional rights to life, liberty and property.

In Canada, two cases bring these issues home. A Québec case brought by ENvironnement JEUnesse (ENJEU) invoked the Constitution on behalf of all Québec residents aged 35 and under to hold the federal government accountable for environmental degradation. 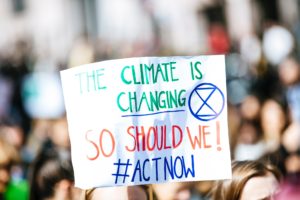 The Québec Superior Court threw out the challenge by denying class-action status, stating that the group or “class” ENJEU sought to represent was arbitrary and inappropriate.

However, the court also found that the issues raised by the challenge were justiciable. This means that the claims of constitutional rights infringement are legally appropriate for courts to decide. This is an important judicial conclusion because courts will consider only questions that are proper in this manner for adjudication. Whether a question is “justiciable,” or subject to resolution in a court of law, is always a significant hurdle for litigation that raises complex, costly and political questions.

In October 2019, a second Canadian challenge was launched: La Rose vs. Her Majesty the Queen, filed in Federal Court. La Rose has 15 individual plaintiffs, which avoids the difficulties in the Québec case of certifying a diverse class.

The differences among the young plaintiffs are legal strengths, demonstrating the range and scale of the impact that the climate crisis is having on on young people. The general claim, however, is the same as ENJEU: the federal government’s actions — and inactions — have fuelled climate change, putting Canadian children in peril and breaking the law.

The legal case of La Rose

The La Rose challenge rests on two legal bases: first, government obligations under Sections 7 and 15 of the Canadian Charter of Rights and Freedoms and, second, the government’s common law and constitutional responsibility to preserve common resources and lands.

Case law on the Charter rights is complex. Courts have turned the sparse language of constitutional text into lengthy, elaborate doctrine. But what counts in this case, with respect to the first legal basis, is simple.

“Everyone has the right to life, liberty and security of the person and the right not to be deprived thereof except in accordance with the principles of fundamental justice.”

The plaintiffs argue, in various ways, that climate change threatens their physical and psychological well-being and development and impedes their ability to make key personal decisions, thus compromising their life, liberty and security of person.

And the existential — or extreme — character of this threat is incompatible with any notion of fundamental justice. Or, in simpler language, furthering climate change’s threat to the survival of the human species is incompatible with the key commitments of our legal and political system.

All the plaintiffs, by virtue of their youth, have pre-existing, distinct and intense vulnerability exacerbated by the government’s failure to address climate change. They argue that this amounts to discrimination on the basis of age.

The Indigenous plaintiffs, in addition, assert that they face race-based discrimination. So this challenge links climate change to Indigenous rights and colonialism. The details of the effect on Indigenous youth signal the central ways in which the health and culture of Indigenous Peoples and communities erode as ecosystems are destroyed and species vanish.

None of these rights infringements can be, the plaintiffs argue, justified under Section 1 (the limitation clause) of the Charter. The plaintiffs also point out how Canada’s international human rights commitments oblige this expansion of Charter rights.

The second legal basis rests on the claim that the public and common resources of Canada’s land, waters and air are the government’s responsibility, a duty imposed in common law and by the Constitution.

This trust-like relationship — captured by the public trust doctrine — requires Canadian governments to respond in a dynamic way to the changing threats of the climate crisis in order to protect and preserve these resources for all Canadians now and into the future.

In the past year, millions of children and teenagers around the world have crowded the streets to protest government inaction on the climate crisis.According to this challenge, the government has breached this duty by failing to act appropriately as climate change threatens “public trust resources,” including the water, air and permafrost that are destroyed by a warming planet.

La Rose sets out novel claims in the Canadian legal system, but these are claims increasingly common internationally. And the Canadian Supreme Court has stated that novel claims are how our Constitution stays relevant as Canadian society and the world evolve.

Whether this case succeeds or not — courts sometimes follow rather than lead — the persuasive message and public profile of this legal challenge strengthen a burgeoning political movement, promising significant enrichment to mainstream political debate. We are getting used to the idea that a healthy environment is a human right.

As the world gears up for the United Nations Climate Conference in Madrid, Spain this December, Canadian lawyers and the youth they represent are busy trying to ensure that the Canadian government walks its international climate action talk back home.

This article first appeared in The Conversation on November 26, 2019 and is reprinted under Creative Commons license.

Margot Young is professor at the Allard School of Law, University of British Columbia. She teaches and researches in the areas of constitutional law, social justice, and feminist theory. She is active in the community, serving as Chair of the David Suzuki Foundation Board of Directors and a member of the Board of Directors of Justice for Girls. She is a Broadbent Fellow with the Broadbent Institution, a Research Associate with the Canadian Centre for Policy Alternative-BC Office, and a Visiting International Scholar with the University of Gothenburg, Sweden.