Canada has one federal and separate provincial and territorial Human Rights Commissions established and governed by their respective enabling legislation. These human rights commissions exist to protect human rights, prevent discrimination, foster equality and resolve complaints. The various versions of human rights legislation are fundamentally similar across the country.

This article describes the legal remedies that may be ordered in Canada for illegal employer discrimination in the workplace. To simplify, only the federal (applies only to federally-regulated workers) and Alberta legislation will be compared here.

Scope and Purpose of Remedies

Employers can help their own cause by showing remorse and acting to promptly address the discriminatory practice so it is not repeated. Such measures may soften the consequences.Both Commissions seek to work with the worker and employer to reach mutual understanding and resolution through mediation. If this fails, the Commissions send the matter to their respective quasi-judicial Tribunal for ultimate adjudication.

Human rights legislation “recognizes and affirms that all persons are equal in dignity and rights” [Walsh v Mobil Oil Canada, 2013 ABCA 238], but it is not meant to punish employers [Robichaud v Canada (1987) 2 SCR 84]. Legal remedies ordered by commissions are remedial in nature and are meant to restore workers to the position they would have been in if the discrimination had not occurred. The remedies are also educational and serve to deter future infractions. While the remedies are not intended to punish employers, they can be substantial sanctions to demonstrate public denunciation of human rights violations.

The remedies available under the Canadian Human Rights Act include orders to [section 53(2) and (3)]:

• cease the discrimination and take measures to prevent recurrence;

• adopt a special program, plan or arrangement (such as an apology or sensitivity training);

• compensate the victim for wages and expenses; and/or

• compensate the victim for pain and suffering up to $20,000 and up to another $20,000 if the discrimination was willful or reckless.

The federal legislation [section 60(2)] authorizes fines against employers for breaching settlement agreements, certain other requirements and for obstructing tribunal process. That money goes to the government, not the employee.

Legal remedies ordered by commissions are remedial in nature and are meant to restore workers to the position they would have been in if the discrimination had not occurred.The Alberta legislation confers broad jurisdiction on the tribunal to redress the discrimination and sets no limit to damages for reckless or willful conduct or for injured dignity and self-respect. The Alberta tribunal can also order costs to a party [s. 32(2)].

Employers need not have discriminatory intent to be liable. They can be liable in both jurisdictions even if they are unaware of an employee’s protected attributes [Robichaud, para 11]. Both tribunals may order more than one remedy.

Remedies are given broad and flexible interpretations according to each context. Previous human rights decisions, as well as the nature of the discrimination, its frequency and intensity, and the vulnerability and impact on the complainant are considered to decide the remedy. Despite the guesswork in awarding pain and suffering damages, they are frequently awarded. Employees must show attempts to mitigate their losses by searching for alternate employment, after allowing for a reasonable period to recover from the discrimination.

Employers can help their own cause by showing remorse and acting to promptly address the discriminatory practice so it is not repeated. Such measures may soften the consequences.

Comparing Remedies at the CHRC and AHRC

The Tables below outline random samples of decisions where remedies were ordered. 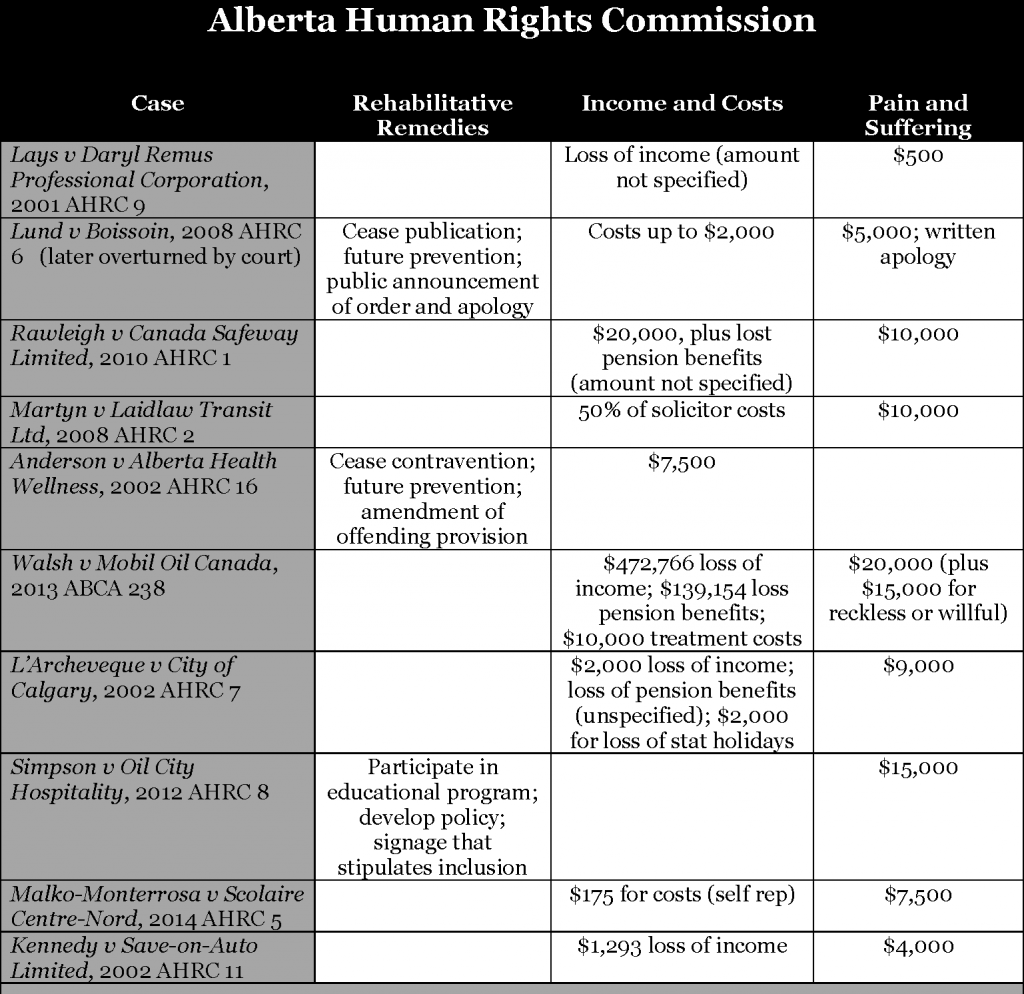 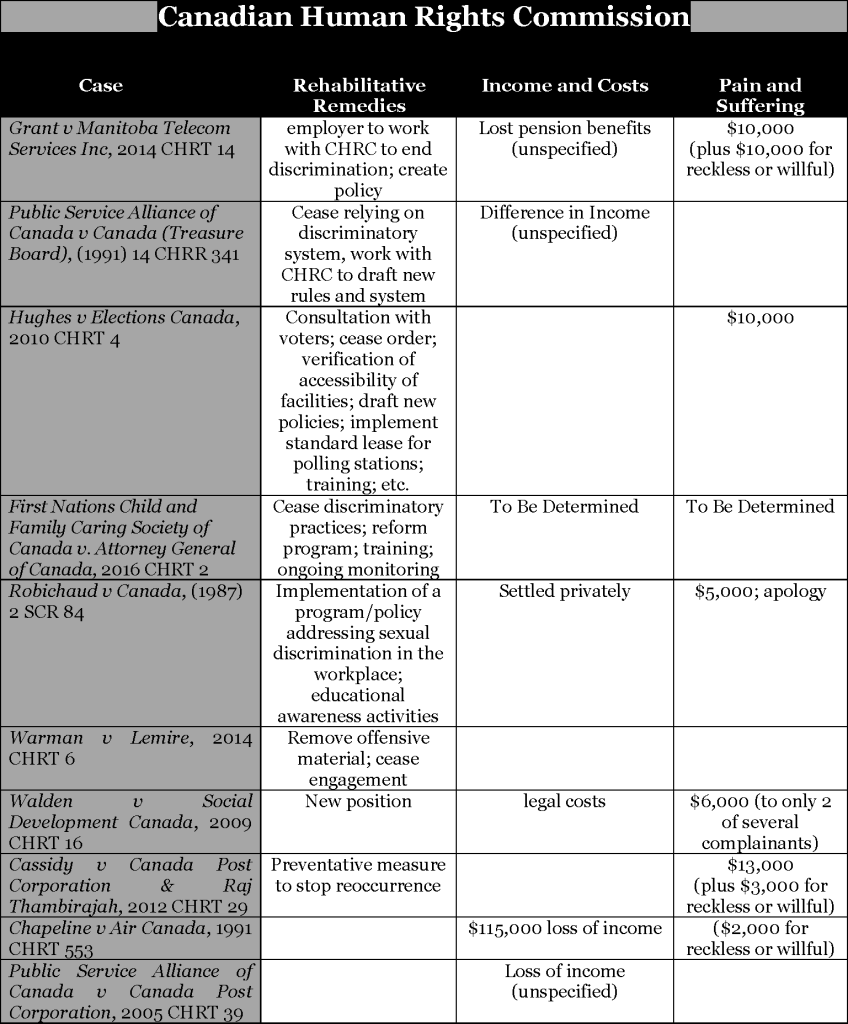 The Alberta legislation confers broad jurisdiction on the tribunal to redress the discrimination and sets no limit to damages for reckless or willful conduct or for injured dignity and self-respect. All Human Rights Commissions in Canada can award a variety of remedies to both compensate discriminated workers and impose measures to preclude future discrimination. Workers comprise the largest group of complainants.

The indeterminate nature of discrimination poses a challenge for assessing legal remedies. Many factors are considered when determining remedies and damages, including the nature of the infringement, the severity and frequency of the infringement, and the vulnerability and impact on the complainant. Human rights legislation is remedial. Accordingly, tribunals exercise significant discretion in each case.

Lora Walsh is an MBA and JD student at the University of Calgary.