A Website of The Centre for Public Legal Education Alberta
You are here: Home / Special Report / 43-3: Emergencies and the Law / Liability of Volunteers in Natural Disaster Emergencies
Reading Time: 4 minutes 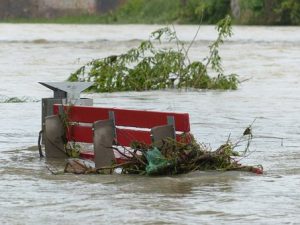 Alberta has recently suffered several sudden, prominent, ruinous natural calamities: the 2012 wildfires in Slave Lake, the 2013 flood in southern Alberta, and the 2016 wildfire in Fort McMurray.  The 2013 flood affected hundreds of thousands of people and took five lives.  It is the most costly natural disaster in Canadian history with damages estimated at $6 billion.  Provincial and federal governments leapt to the rescue.  Military units were deployed, in addition to the Canadian Red Cross and many other civilian rescue organizations.

Only Nova Scotia’s Volunteer Protection Act sets out the roles and responsibilities of volunteers.In Calgary alone, 2,500 volunteers joined in, some of whom were injured during the recovery.  Three volunteers suffered chemical burns, were transported to hospital and were later billed for the ambulance ride.  Alberta Health Services eventually decided not to bill any volunteers whose injury resulted from their participation in the flood cleanup, even without any formal policy to exempt them.

This article identifies some of the legal issues and laws pertaining to volunteers who serve in disaster relief efforts.

Natural disasters are managed first at the local level by first responders such as medical professionals and hospitals, fire departments, the police, and municipalities.  They are responsible for the protection and preservation of life, property, evidence and the environment. They are police officers, firefighters, military personnel, paramedics, medical evacuation pilots, dispatchers, nurses, doctors, emergency medical technicians and emergency managers. Physicians and other first responders benefit from explicit legislation that protects them from liability for negligence in their rescue work.

Injuries incurred by volunteers, especially if unfit and unprepared, can lead – in addition to mental and physical health issues – to loss of income.  Compensation coverage varies across the country. The common law does not specifically define volunteers.   The British Columbia Emergency Program Act requires a legally protected volunteer to be “registered by a local authority or the Provincial Emergency Program for the purpose of responding to a disaster or an emergency” [s. 1(1)].  This specifically includes these pre-registered “volunteers” in the class of persons who are protected from general liability in ordinary negligence while acting in good faith.  Other “Good Samaritan” legislation, discussed below, does not specifically name volunteers as coming within this exemption from liability but they would most often be included in it.

Volunteers, by definition, do not receive any remuneration from an organization for their work.  They are not employees.  A prepared volunteer may work without compensation for a non-profit organization. Spontaneous volunteers assist in an emergency unaffiliated with any organization.

When natural disasters strike, the call for help goes out and volunteers are pressed into service of all kinds while professional first responders focus on tasks that demand their expertise.  Volunteers bring varied levels of skill and care to the field.  They act outside the scope of an organization which would be legally responsible for proper training, personal safety and protective equipment.

Workers’ compensation is equally inconsistent across jurisdictions because coverage for non-profit activities is defined by various exclusions and inclusions.  In Alberta, volunteer firefighters are deemed “part-time firefighters” and they can be eligible for compensation.

Under Alberta’s Emergency Management Act, once a state of emergency has been declared, the province may delegate powers and implement emergency plans.  This legislation defines roles, regulations for ministers and municipalities as well as liability protection for emergency service providers.  It does not deal with volunteers, or whether they qualify as “acting under the local authority’s direction or authorization (s. 28)” or “acting under the direction or authorization of [a search and rescue organization] (s. 29).”

Only Nova Scotia’s Volunteer Protection Act sets out the roles and responsibilities of volunteers.

When natural disasters strike, the call for help goes out and volunteers are pressed into service of all kinds while professional first responders focus on tasks that demand their expertise.  Canadian law does not require people to render emergency assistance to others, but it encourages them to do so through what are known as “Good Samaritan” statutes.  These laws excuse volunteers who intervene in good faith even if their acts are negligent and cause injury to others.  These statutes may actually be called Good Samaritan Acts (as in British Columbia and Quebec) or something else, such as the Emergency Medical Aid Act in Alberta.  Overall, these Good Samaritan Acts provide relief from liability when volunteers assist victims in emergency situations, but they do not protect volunteers from their gross negligence.

If volunteers are not protected by Good Samaritan legislation, they will be subject to the laws around duty of care and negligence.  Liability is also measured on the basis of foreseeability and remoteness and the likely outcome if the volunteer had not acted.  Volunteers helping in disaster zones may be assuming the ordinary risks involved with the recovery activity.

A voluntary organization and its management may be subject to criminal liability under section 217.1 of the Criminal Code:

“Every one who undertakes, or has the authority, to direct how another person does work or performs a task is under a legal duty to take reasonable steps to prevent bodily harm to that person, or any other person, arising from that work or task.”

On the side of rescue, first responders such as paramedics require insurance based on their occupation.  Disaster volunteers, by contrast, who suffer harm or loss in rescue and recovery efforts may obtain compensation from those legally responsible for their injuries.  An organizational or the individual personal insurance policy may also cover such injuries.

Every province manages disasters differently.  Many issues involving volunteer liability are resolved in a small claims court or through insurance companies so they are not reported publicly.

While non-profit organizations and governments want to encourage volunteers to help others in need during a natural disaster, there is no coherent law that deals with volunteers.

Lila Swiatylo recently earned a B.Comm from the University of Calgary.

Kristen Leinweber is currently a business student at the University of Calgary.