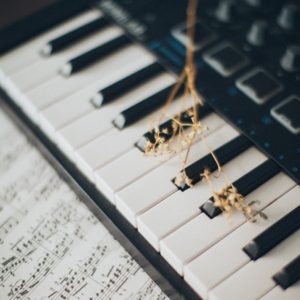 Photo by Elina Sazonova from Pexels

For over a century, music has been used in film to not only enhance the viewing experience, but it has become very much an integral part of the film. For example, it is hard to imagine watching Star Wars without the score by legendary composer John Williams. Songs, by especially popular artists, can also rise to become the proverbial flag-bearers of a film. Think “Eye of the Tiger” by Survivor in Rocky III or, even though it makes me gag mentioning it, “My Heart Will Go On” by Celine Dion in Titanic.

Aspiring filmmakers know of the power of using music in their projects. In these times of COVID-19, you might be more tempted to add music to your video content that you are making more and more for virtual classrooms, seminars and conferences. But how can you legally use music in your films and video projects? Unfortunately, the answer is not very straight-forward.

I attended a music licensing workshop a couple years ago by Elizabeth Klinck, who is a very competent researcher and music supervisor for hire. She described the system of licensing music for film as “Byzantine.” And she’s not wrong. Different types of rights need to be licensed depending on the music you are using, such as an existing recorded song, an existing song for which you want to record your own rendition, or a new song you want to have written and recorded. For sake of reference, “song” refers to a musical work whether or not it includes vocals.

1. Using an Existing Recording of a Song

Let us say you really like Taylor Swift and you think her latest hit “Cardigan” would work amazingly in your short film. You would need to obtain not one, but two licences.

The first of those is a synchronization licence (‘sync licence’) to reproduce the music “in timed relation” with your audio-visual work. Here, the songwriters or composers are giving you permission to use the song in your film. You would track down, or hire a music supervisor to track down, which big label(s), e.g. Universal Music Group, administers the publication rights on each of those songwriters’ behalf and their respective percentage ownership of those rights. You would then try to negotiate a fee for the sync licence that would fit into your budget and based on how you are planning to use the song. Then the publisher(s) would prepare their standard sync licence agreements for all parties to sign. But you are unlikely to even get that far for a Taylor Swift song, unless you have a massive music budget for your project. Even if you are able to negotiate a sync licence price for “Cardigan”, you still only have one-half of the permissions you need!

… stock music sites try to be a one-stop shop where their licence can include all rights to the music you need to use in your film.The next permission you need for using “Cardigan” in your film is a master use licence, which is the right to use that particular recording of the song. The master use rights holders for that recording, likely one or more major record labels for that Taylor Swift song, is not necessarily the same as the publishers for the sync rights. Like with the sync licence, you (or your music supervisor) would track down all of the potentially multiple rights holders of the master and negotiate a fee, which must usually be no less than the fee for the sync rights.

Unlike for public performance rights (e.g. playing recorded songs in a restaurant), there is no central administrative organization like SOCAN or ASCAP that doles out sync and master use licences based on set rates. Sync and master use rights are all free market negotiable with their respective rights holders, unfortunately. Byzantine indeed!

You may want to steer clear of expensive songs by popular artists like Taylor Swift and instead license songs from small local bands. The same rules apply here, except you might be dealing with the artists themselves to figure out the percentage splits between the songwriters for the sync rights and whoever owns the master. You can find examples of sync and master use agreements on this page.

2. Recording a New Version of an Existing Song

There’s a fantastic cold open for a Brooklyn Nine-Nine episode where Jake Peralta gets a lineup of perpetrators to sing a few lines of “I Want It That Way” by the Backstreet Boys. Unlike licensing an already recorded rendition of a song like in our above Taylor Swift example, there is no master here to license because the actors sing it. Thus, the context of the sync rights they would have negotiated with the publication rightsholders would be to perform parts of that copyrighted song. I have heard that this can sometimes push up the fees so much that it would be cheaper to just get a sync and master licence to use a version that was already recorded! However, if performing your own version or a new version of an existing song is important, you will need to explore this avenue of licensing.

Different types of rights need to be licensed depending on the music you are using …Another way of legally using music in your film is to hire a composer or songwriter to write it and record an original song. Budget permitting, this is the choice for film producers who want a custom score to convey the intended effect and emotions in the film. The ins and outs of a composer agreement deserve an article in itself, but this is one way to ensure you have all the rights you need in the music for your project.

There are a couple of options to avoid the high costs and having to navigate the complexities of the above options. Stock music from sites like Pond5 and PremiumBeat can be relatively affordable sources for music to use in your film or video project. Rather than having to chase down many rights holders, stock music sites try to be a one-stop shop where their licence can include all rights to the music you need to use in your film. However, you should carefully review – better yet have your lawyer review – the terms of their standard licence agreement to make sure that licence gives you the rights you need because not all stock music sites are created equal and they usually have different levels of licences. On several occasions, I have reviewed the standard terms of stock music licences and told clients to absolutely not use music from that site.

Finally, there is music from public domain (often referred to as just “PD”) sources. For PD music, this can of course be a cheap (i.e. free) way of obtaining music for your project. However, you need to make sure that the music you are considering is fully in the public domain. Just because the copyright term of the composition for Mozart’s “Symphony No. 40” has long expired, that does not mean at all that the London Philharmonic Orchestra’s performance and recording of it 10 years ago is PD. You may still need to hire a music supervisor or a researcher to verify that a musical work (and its recording) is PD.

So, cue the final credit roll and happy hunting for music to use in your next film or video project!

If you want to learn more about music licensing in film, please check out our four-part series on that subject we posted in summer 2019 on our entertainment law podcast Legal Cut Pro, which you can find on your favourite podcast catcher.

Gregory has been practising law since 2009 in the areas of business, trademark and entertainment law. He is also a co-host of the Legal Cut Pro entertainment law podcast and has been a sessional instructor at MacEwan University. Before his law career, Gregory worked in film and television for five years in various roles from being a locations PA to being a business coordinator in marketing/distribution. While Gregory takes his clients' matters seriously, he believes in having fun with the law by running panels and mock trials at the Calgary and Edmonton Comic Expos and participating in Nerd Nite.