In 1978 Marek and Gilles started work as salesmen for an Ontario car dealership (HOJ), on an ongoing, indefinite basis. By 1985 they had both been promoted to managerial positions and were earning close to $200,000 (in today’s terms) in total compensation which included commissions, allowances, bonuses and salaries. Then, early in 1985, Marek voluntarily signed an “employment contract update” in the following form:

Termination – Employer may terminate employment at any time without notice for cause.

Gilles voluntarily signed the same update, except his entitled him to two weeks notice or salary. Six months later both men were dismissed without cause. The employer realized its error and voluntarily paid them each for four weeks as required by the provincial Employment Standards Act. This amounted to between $5300 and $6400.

What would you do, if anything, if you were Marek and Gilles? Would you sue the employer for wrongful dismissal? Or, would you consider the four weeks pay received as satisfactory, since it was the legislative minimum?

Minimum or Reasonable Notice for Termination of Employment?

All employees can be summarily dismissed (fired) for serious misconduct. That is a topic on its own, but in this article we merely observe that the courts have raised the bar on misconduct. It is more difficult today for employers to justify firing a worker, especially if the misconduct was a onetime event, if it was not wilful, if it could be related to a disability or other human right protection in any way, and if progressive discipline was not first attempted.

So, even where there is serious misconduct (cause) and always where there is none, dismissals of ongoing employees – that is, without fixed terms of employment – are achieved by giving the employee reasonable working notice of termination or, where the employer is willing to let (or require) the worker leave immediately, to pay salary and benefits for that same notice period. Most wrongful dismissal lawsuits are about the length of this notice period, whether worked or paid out. Employees sue because they think that a judge will grant them longer notice.

That there are so many wrongful dismissal lawsuits on the issue of length of notice should be surprising. There are statutes and thousands of judicial decisions over decades and clear principles to guide employers on calculating length of notice.

The first level of compliance is the minimum notice of termination. Any notice below what is minimally prescribed will always end in the employer paying notice damages. This minimum notice is set out in provincial employment standards legislation. It is tied directly to length of service. The longer one has worked for an employer, the longer (to a maximum of a few months notice) the notice entitlement. As we saw with Marek and Gilles, the employer was minimally required to give each of them four weeks of  working notice or pay in lieu.

Starting dates and termination dates are easy information points for employers to access in order to calculate the service period for each employee. It is simple to take that service period and plug it into the statutory grid to determine the legal minimum notice period. No human resource department of any employer should get this wrong.

Since the minimum notice determination is so simple, it constitutes an excellent strategy for employers of indefinite employees. When someone is hired, the employment contract might state something like, “both employer and employee agree that the employee’s entitlement to reasonable notice of termination without cause shall be as set out in the (applicable provincial) employment standards legislation.”

Minimum employment standards legislation cannot be bargained away. If the employer gets it wrong and stipulates a notice period below the statutory minimum in an employment contract, a court will toss it out as null and void.

This practice of converting the notice floor to a notice ceiling, while only as generous as the legislators made it, bears a huge human resources and risk-management advantage: certainty.

Everyone knows to what notice the departing employee is entitled (which is the stuff of most lawsuits). If the employer wishes to be more generous and, in fact, give more notice or pay in lieu upon actual dismissal, it is free (but not required) to do that. It would be hard to envision a successful wrongful dismissal case where the employer actually gave more notice than legally required and promised in the contract.

The other category of notice is reasonable notice, or common law notice. This is invariably more generous than statutorily-prescribed minimum notice. If the employer and employee do not limit the notice entitlement to the statutorily-prescribed minimum notice (they rarely do), reasonable notice becomes the default principle – the common law notice period will automatically apply. 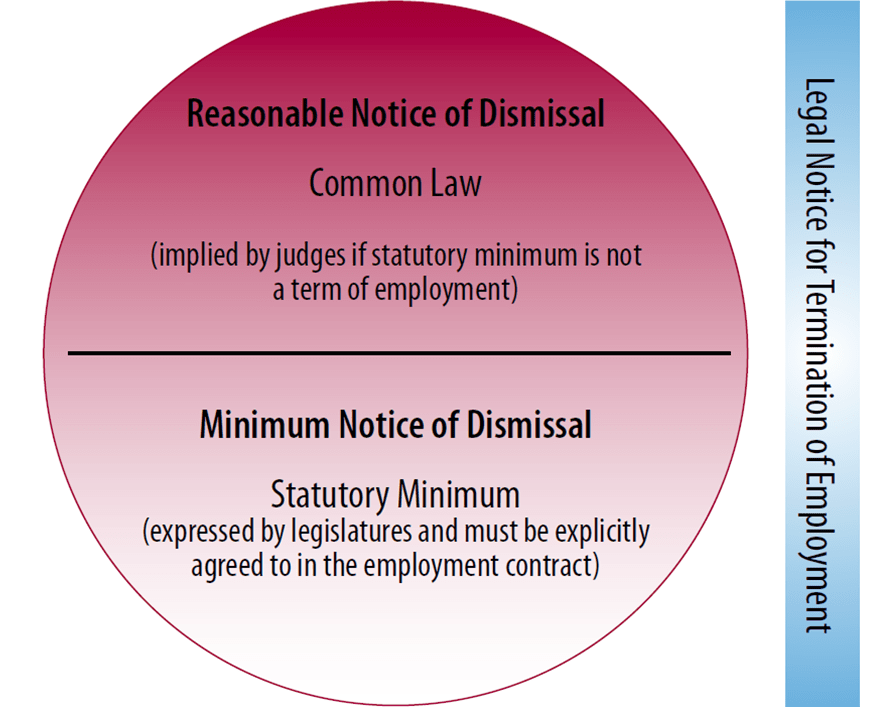 The courts have listed several criteria to determine common law notice. Some say there is a generally-accepted benchmark of one month of notice for every year worked, applicable between about four and fourteen years, but this has not been officially endorsed. What constitutes reasonable notice will vary with the circumstances of any particular case. The most common list of factors is from the 1960 case of Bardal v. The Globe and Mail:

The Legal Issue for Marek and Gilles

These workers’ employment contracts stated that they were entitled to less notice than the floor set out in the Employment Standards Act. They were paid for the minimum legislative amount of notice upon dismissal. How could they do better than that?

The Ontario Employment Standards Act stated that “no employer … and no employee … shall contract out of or waive an employment standard and any such contracting out or waiver is void.”

Marek and Gilles sued for wrongful dismissal. Their case went all the way to the Supreme Court of Canada [Machtinger v. HOJ Industries Ltd., [1992] 1 S.C.R. 986]. Would the Court respect the implied intentions of the employer and these employees from their contract and actions, which embraced the minimum legislated notice period? By inserting notice period terms in the contract, did both parties consider and evaluate the notice issue and evince a clear intention not to provide for significantly longer common law notice periods? Or, would the Court disregard all expressed intentions of the parties (including what might have been a mistake or oversight on the part of the employer), pronounce their notice clause illegal under the legislation and uphold common law notice requirements as if the parties never thought about or discussed notice?

The difference would be between one month of notice or more than seven months of notice, plus legal fees through three levels of court proceedings, which would amount to several factors more than the damages at stake.

The Supreme Court of Canada drew the distinction between these two different kinds of legal notice, and asked “is an employee entitled to reasonable notice of dismissal, or to the minimum statutory notice period? The answer to this question is of considerable importance to employees.”

The Court observed the employer’s original restriction on notice fell below the legal minimum:

It then briefly outlined the origins of reasonable notice at common law (references deleted):

The history of the common law principle that a contract for employment for an indefinite period is terminable only if reasonable notice is given is a long and interesting one, going back at least to 1562 and the Statute of Artificers … [which] prohibited employers from dismissing their servants unless sufficient cause had been shown before two justices of the peace. By the middle of the nineteenth century, however, English courts were beginning to imply a term into contracts of employment that the contract could be terminated without cause provided that reasonable notice was given. Although it was initially necessary to prove the incorporation of a custom of termination on reasonable notice into the contract in each particular case, the English courts gradually came to accept reasonable notice as a contractual term to be implied in the absence of evidence to the contrary. In Canada, it has been established since at least 1936 that employment contracts for an indefinite period require the employer, absent express contractual language to the contrary, to give reasonable notice of an intention to terminate the contract if the dismissal is without cause.

The Supreme Court of Canada decided in favour of Marek and Gilles. The judges struck down the contract clause about notice under the Act. They went on to add that the parties’ expressed intention cannot be supported if contracts fail to comply with the minimum standards. In other words, if they were null and void as falling below the legal minimum, these struck clauses were not even admissible as evidence to show the parties’ intentions:

The Court sought to send a strong message to employers for ignoring minimum statutory protections:

If the only sanction which employers potentially face for failure to comply with the minimum notice periods prescribed by the Act is an order that they minimally comply with the Act, employers will have little incentive to make contracts with their employees that comply with the Act. … most individual employees are unaware of their legal rights, or unwilling or unable to go to the trouble and expense of having them vindicated.

Employers can rely on the fact that many employees will not challenge contractual notice provisions which are in fact contrary to employment standards legislation. Employers such as the present respondent can contract with their employees for notice periods below the statutory minimum, knowing that only those individual employees who take legal action after they are dismissed will in fact receive the protection of the minimum statutory notice provisions.

Nor, the Supreme Court of Canada concluded, is it too much to ask well-resourced and sophisticated employers to ensure that they properly comply with the law:

[T]his approach provides protection for employees in a manner that does not disproportionately burden employers. … an employer can readily make contracts with his or her employees which referentially incorporate the minimum notice periods set out in the Act … Such contractual notice provisions would be sufficient to displace the presumption that the contract is terminable without cause only on reasonable notice.

Employers may legally contract with their ongoing employees to guarantee only the minimum legislative benefits (convert the floor to the ceiling), but they must be careful not to stipulate a lower level of entitlement than which the law prescribes. The Supreme Court of Canada, in Machtinger used this case to send the message that it will advance the interests of employees. In many ways, this was a minor, technical, perhaps even accidental error by the employer which it was readily willing to correct by its good faith actions to pay these employees their full legal entitlement.

The judges, nevertheless, consider employees like Marek and Gilles generally less powerful than their employers to enforce their rights. Where explicit minimum compliance with the law is not too much to expect of employers, even a minor written technical breach of the law can have serious consequences for the stronger party. The case also illustrated the primacy of what is written (express terms) over what is intended or suggested by one’s actions (implied).

Another important practical lesson point that all employers will be held accountable for not only knowing the law as it relates to the employment relationship, but also where they, in any way, try to improperly deprive employees of their rights.