You are here: Home / Feature Articles / 43-5: How We Make Our Laws / Moving Toward a New and Improved Senate
Reading Time: 2 minutes 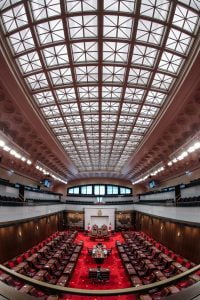 The following is the summary of a study completed by Paul G. Thomas on the Senate of Canada.

The Senate of Canada has changed significantly as a result of the 2014 decision by Justin Trudeau, then leader of the Liberal party, to remove Liberal senators from the parliamentary caucus; and by his introduction, as prime minister, of a new procedure for the selection of senators. The Independent Advisory Board for Senate Appointments now proposes candidates from pools of interested Canadians who have applied. Almost all those appointed since March 2016 have joined the Independent Senators Group (ISG), which now has 58 members in the 105-seat second chamber.

The Senate has not been completely transformed, but enough change has occurred to allow us to contrast what author Paul Thomas refers to as the “old, partisan, government-controlled” Senate with a “new, non-partisan, independent Senate.” When it was a highly partisan body composed almost entirely of Liberal and Conservative senators, the Senate was constrained in the performance of its three main constitutional roles of representing regions, providing sober second thought on bills and upholding the rights of minorities. The “new” Senate has demonstrated a greater willingness to propose amendments to government legislation, but so far has stopped short of an actual veto. Whether intended or not, the Trudeau changes have meant that the Senate has become a curb on prime ministerial power and the use of majority power in the House of Commons.

Although the ISG has become the dominant presence in the Senate, it is not a caucus that takes direction from the government. The traditional clash between organized government and opposition sides has waned but not disappeared entirely because Conservative senators continue to act as an opposition. In addition, spontaneous coalitions in opposition to elements of certain government bills have emerged within the ISG.

The new Senate operates on the basis of a dispersed, horizontal and shared form of leadership that depends on “soft power” techniques such as consultation, persuasion and negotiation. The leadership skills of the Government Representative and his two deputies have become key to advancing Senate business. Senate rules, procedures and resource allocations have been gradually modified to reflect the new realities. As a result, a new institutional culture that is more collegial and constructive than the often-adversarial culture of the past is developing.

Thomas concludes that further changes are needed to carry forward the present renewal. These include the establishment of a business committee to plan and organize the work of the Senate and the development of a set of criteria, perhaps enshrined in the Senate’s rules, to guide it in determining whether to delay, amend or defeat a government bill.

This summary was first posted by the Institute for Research on Public Policy on March 28, 2019 and is reprinted with permission.

The full study can be found here: http://irpp.org/research-studies/moving-toward-new-improved-senate/

Paul G. Thomas is professor emeritus of political studies at the University of Manitoba.