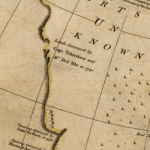 Figure 1 – 1763 map by Cartographer Robert Sayer showing Lands discovered in around present day Alaska in the north, as well as the mighty Columbia River in the South, which was labelled, “River of the West”.

In 1763, after the Treaty of Paris, a map was published by, Robert Sayer: A New Map of North America, with the British, French, Spanish, Dutch & Danish Dominions on that great Continent; and the West India Islands, According to the Definitive Treaty concluded at Paris 10th February 1763 .

It’s fascinating to look closely at the places that were named, including: New France, New Mexico, New York, New Albion, New Navarr Mexico, New Britain, New Denmark, and New Ultra.  The entire Northwest was only labelled, “Parts Un Known” and was devoid of much detail, with exception of the, “River of the West”, which was actually the Columbia River and the Juan de Fuca Strait.

An appropriate name for what has become known as British Columbia is “New West Lands Reserve“, because unceded land is reserved by the Royal Proclamation of 1763. The name is plural as there is more than one First Nation in the Province.  The reference to “Reserve” connotes a sense of non-permanence, which is the underlying goal of the 1763 Proclamation.  Moreover, the Iroquois and Metis who guided the European fur traders to the area originally knew the area as the New West Territories, just as Quebec was known as New France. The many place names with the word “New” makes it even more convincing that the name, “New West Lands Reserve” should be used.

Moreover, New West Lands Reserve also honours and commemorates some of the earliest Europeans that came into the land. It was the North West Trading Company that first explored what is now British Columbia under the command of Simon Fraser in 1805.  Although Simon Fraser called a region of the province  New Caledonia, there is an island in the Pacific Ocean with the same name.  Likewise, there already is the North West Territories and there shouldn’t be confusion with the lands known as British Columbia, with those territorial lands north of the 60th parallel.

The British North America Act 1867 established Canada as a nation and British Columbia was later added as a province under the British Columbia Terms of Union in 1871. Section 109 of the Constitution Act 1867 provides, “All Lands, Mines, Minerals, and Royalties belonging to the several Provinces of Canada, Nova Scotia, and New Brunswick at the Union, and all Sums then due or payable for such Lands, Mines, Minerals, or Royalties, shall belong to the several Provinces of Ontario, Quebec, Nova Scotia, and New Brunswick in which the same are situate or arise, subject to any Trusts existing in respect thereof, and to any Interest other than that of the Province in the same”. Section 109 of the Constitution Act 1867 applies in British Columbia, due to s. 10 of the Terms of Union of British Columbia which made it a requirement that the lands, mines, minerals or royalties in the Province are “subject to” existing trusts and interests.  There is an existing trust and that is the New West Lands Reserve made by the Royal Proclamation of 1763. There is, as well the existence of Aboriginal Title and the Indian interest, which are two separate legalities. Indian Reserve and Aboriginal Title are not the same, as the former is derived from statute and the latter is derived from occupation.

The Royal Proclamation of 1763 created an Indian Reserve in that all unceded land are lands reserved for the Indians and should be properly known as New West Lands Reserve. Lands with the name “British Columbia” should only apply to such lands where treaties have been made in the province, for example, Treaty 8 and Douglas Treaties.

In 1888 the Judicial Committee of the Privy Council on appeal  from a  judgment of Supreme Court of Canada, recognized that unceded land is an Indian Reserve. The Court stated in the case of St. Catherine’s Milling and Lumber Company v. The Queen, “The lands reserved … shall be reserved for the use of the Indians, as their hunting grounds, under his protection and dominion.”

In the 1850s, Sir James Douglas was running the show for the Hudson Bay Company on Vancouver Island, where he was busy making treaties as was required by the Royal Proclamation of 1763. Some will say that the Royal Proclamation of 1763 doesn’t apply in British Columbia because, at the time of the Proclamation, the western coastline wasn’t fully yet known to the Europeans and that the Indians that inhabited the lands were not connected to the Crown.

The Royal Proclamation of 1763 is a constitutional document and a statute (see section one of the British Columbia Interpretation Act). It is mentioned in s.25 of the Canadian Charter of Rights and Freedoms. The document itself and any doubt or ambiguity, must be liberally construed and apply in British Columbia, in favour of the Indians.

The United Kingdom of Great Britain and Northern Ireland, the Hudson’s Bay Company, as well as the Colony of British Columbia had no right to take up the lands in what is now known as British Columbia on the basis that the Indian inhabitants (a.k.a. First Nations), did not enter into treaties for the lands. Although some treaties were made, most of the Province remains unceded and should be recognized for what it is, the New West Lands Reserve.