“Location is not the litmus test for determining the expectation of privacy.”

In Canada, our home is our castle, at least in legal terms.  We enjoy the greatest constitutional protection of privacy in our homes.  What happens when our private personal information from our homes is set outside as trash?  We expect it will go straight to the waste disposal system.  Are we entitled to privacy for our garbaged personal information?  In 2009, the Supreme Court of Canada answered this question in R v Patrick.

In 2003 Russell Patrick was in his late twenties, a university graduate in physics and a former champion swimmer. He had represented Canada at the 1994 Commonwealth Games and held the Canadian men’s 100-metre breaststroke record from 1995 until 2001. Patrick was also successful in the narcotics industry, at the top of a sophisticated criminal organization targeting young people. He operated an ecstasy lab in his house. 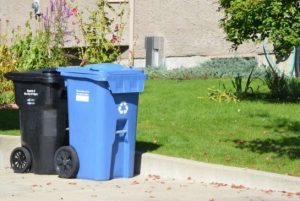 Picking through abandoned garbage is a common police practice in criminal investigations. Six times in December 2003, without a warrant, Calgary police went to the lane behind Patrick’s house in the early morning, reached into the airspace across the fence line into Patrick’s garbage cans, pulled out the garbage bags, and seized many items that they found inside,  including receipts for the purchase of chemicals, torn-up chemical recipes and instructions, gloves, used duct tape and packaging for a scale.  They put the bags back in the cans.  The police officers did not step foot onto his property.

…garbage collectors do not promise to keep the trash confidential.These garbaged items were used to obtain a warrant to search his house and garage, which in turn yielded further evidence.  Patrick was charged for unlawfully producing, possessing and trafficking in an illegal drug.

Section 8 of the Canadian Charter of Rights and Freedoms guarantees freedom from unreasonable search and seizure by government agents. At his 2005 trial, Patrick argued that by taking his garbage bags from his property, the police had breached this right. He argued that all evidence obtained from his garbage should be inadmissible in any trial against him.

The subject matter of the search here was not merely ‘garbage’.  It was information of the householder’s activities and lifestyle.  The Court said “people generally have a privacy interest in the concealed contents of an opaque and sealed ‘bag of information.’”

In assessing the reasonableness of a claimed privacy interest, the Court looks at the totality of the circumstances. Did Patrick have an objectively reasonable expectation of privacy in his abandoned garbage? The garbage bags were placed at Patrick’s property line, accessible to anyone passing by. The Court said the police reaching through Patrick’s airspace to retrieve them was “relatively peripheral.”  This was not a “perimeter search” since police did not walk onto private property.  They were entitled to be in the public alley behind Patrick’s home.

Did Patrick have a reasonable expectation of privacy in his discarded garbage and their contents? The Court concluded Patrick abandoned his original privacy interest in the contents of the garbage bags as soon as he placed the bags out for collection.  He retained control over the garbage until he placed it within reach of his lot line.  Once he placed the bags at the lot line, Patrick had sufficiently abandoned his interest and control to eliminate any objectively reasonable privacy interest.”At that point, he had “done everything required of him to commit his rubbish to the municipal collection system.” The bags were unprotected in an open container, and easily accessible by anyone walking by. The bags were not yet collected by the garbage collectors.  Even if they had been collected, garbage collectors do not promise to keep the trash confidential.  it would be unreasonable for a homeowner to expect ongoing confidentiality in their trash. An independent observer would not think an expectation of privacy was reasonable in the circumstances.

Patrick had abandoned the garbage bags, so there was no existing privacy interest when the police retrieved them. The Court said the police technique was objectively reasonable. Patrick’s surrender of his lifestyle and biographical information in his trash tipped the balance in favour of the legitimate demands of law enforcement. Patrick was sentenced to four years imprisonment for trafficking ecstasy and fined $48,000.

After Patrick, the Supreme Court continues to emphasize that expectations of privacy will be assessed by the totality of the circumstances. Yet, the numerous considerations are cumbersome and subjective.  Last year, the Court restated and slightly simplified the inquiry whether one’s expectation of privacy is objectively reasonable in R v Marakah, a case involving cell phone text messages.

A homeowner who has no remaining interest in physical possession of property cannot claim a strong interest in its privacy, specifically the information embedded in one’s garbage. Canadians should think about this before discarding personal and private information in their trash. The police may be reading it.