A Website of The Centre for Public Legal Education Alberta
You are here: Home / Feature Articles / 38-1: Laws for Your New Land / Permanent Residents and Residency Obligation
Reading Time: 5 minutes 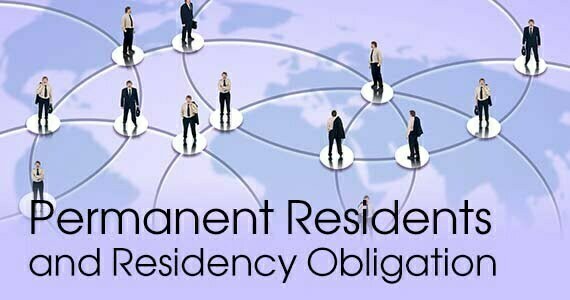 People from all over the world make applications to come to the promised land of Canada.

They may come via many categories of immigration, including Family Class, Skilled Worker Class, Entrepreneur Class, Investor Class, Self-Employed Class, Canadian Experience Class, or Refugee Class. Once they arrive in Canada for landing as a Permanent Resident, Section 28 of the Immigration and Refugee Protection Act SC 2002 Chapter 27 (IRPA) applies. The Permanent Resident (PR) is required to maintain his or her Residency Obligation as prescribed under Section 28, as follows.

28. (1) A permanent resident must comply with a residency obligation with respect to every 5-year period.

(2)The following provisions govern the residency obligation under subsection (1):

(a) a permanent resident complies with the residency obligation with respect to a 5-year period if, on each of a total of at least 730 days in that 5-year period, he or she is

(i) physically present in Canada,

(ii) outside Canada accompanying a Canadian citizen who is his or her spouse or common-law partner or, in the case of a child, his or her parent,

(iii) outside Canada employed on a full-time basis by a Canadian business or in the federal public administration or the public service of a province.

The Five-Year period is a moving window …

The “Five-Year Period” is a moving window; that is to say, at any date of examination by an officer (inland immigration officer, border service officer at a Port of Entry, or overseas visa officer), the PR must satisfy the examining officer that he or she has remained in Canada physically for at least 730 days (two years) cumulatively during the immediate five years.

In the event the PR has been landed in Canada for less than five years, the days in Canada from the time of his or her landing to the date of examination—plus the remaining days in the “Five-Year Period”—must total at least 730. Otherwise, the PR is in breach of his Residency Obligation and runs the risk of losing PR status.

There are exceptions to the 730 days in Canada requirement as set out in IRPA Section 28 (2)(ii) and (iii). The days spent outside of Canada are counted as In-Canada days if:

Affluent Asian families longing for the good living conditions of Canada frequently found themselves facing the dilemma of giving up lucrative established financial opportunities in their home country to enjoy good non-monetary lives of Canada. They arranged their family affairs to allow the spouse and children to reside and study in Canada, while the principal income-earning spouse commuted back and forth between Canada and the home country, to maintain their financial earnings.

Some went to the trouble of setting up a paper business in Canada so they could claim to be employed by a Canadian business in compliance with Section 28(2)(iii). That is usually met with suspicion by the examining officer—IRPA Section 61(2) states that a Canadian business does not include a business that serves primarily to allow a permanent resident to comply with his or her resident obligation while outside of Canada.

Another common misconception among PRs is that once their PR Card expires, they are no longer a permanent resident of Canada.

For the five-year period of examination, the examining officer would not count any days the person spent outside Canada. For example, a PR remained in Canada after landing for two full years, but left Canada after that and has not returned to Canada since. When examined by an officer at the end of year six, all of the PR’s first year of 365 days in Canada will not be counted; he or she will be in breach of IRPA Section 28.

Another common misconception among PRs is that once their PR Card expires, they are no longer a permanent resident of Canada. We should bear in mind that the PR Card is simply an administrative tool to identify the PR’s status as such and to control his or her entry into Canada through a “Commercial Transporter”—airlines, bus lines, and so on; the fact that the PR Card has expired does not remove his or her status as a permanent resident.

The PR will lose PR status only when:

Here is an analogy: A Canadian citizen’s passport has expired but the person is still a Canadian citizen and has not lost citizenship just because his or her passport expired.
If a Departure Order is issued, the PR will have a right of appeal to the Immigration Appeal Division of the Immigration and Refugee Board (IAD) within 30 days (60 days if the negative determination is made when the PR is outside of Canada). The IAD Appeal can be based on law or on equitable relief, commonly known as Humanitarian and Compassionate factors (H & C) or a mixture of law and H & C.

The list is not exhaustive; it is subject only to the skills and ingenuity of a good advocate at the Appeal Hearing.

This article was originally published in the Fall 2012 issue of The Scrivener, and is reprinted with permission.

Alex Ning, C Med, RI, RCIC, is a BC Notary in his 29th year of practice. Past Vice Chair of the Discipline Council of the former regulator CSIC, he specializes in hearings and appeals.