You are here: Home / Benchpress / Situation in the Supreme Court
Reading Time: < 1 minutes 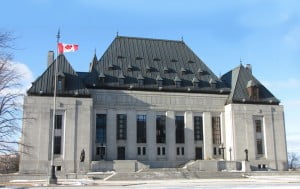 An interesting and unprecedented situation is unfolding at the Supreme Court of Canada. The newest designate to the Court, Marc Nadon, has stepped aside for the time being because a challenge to his appointment has been filed.  A Toronto lawyer alleges that Justice Nadon does not meet the requirements for a judge from Quebec under the Supreme Court Act. He contends that the Act does not allow for a judge from the Federal Court, as Justice Nadon was prior to his appointment, to sit as one of three constitutionally required judges from Quebec.

Two cases of particular interest will come before the Supreme Court of Canada this fall.  One is the federal government’s reference question about the Senate. The other involves a national security case and security certificates:  Minister of Citizenship and Immigration et al v. Mohamed Harkat et al.

The Harkat case is of particular significance because it is speculated that Prime Minister Harper wanted Justice Nadon on the bench when this case is heard. Justice Nadon was alone in supporting the government’s position in the Khadr case when it was heard by the Federal Court of Appeal.