A Website of The Centre for Public Legal Education Alberta
You are here: Home / Feature Articles / 40-1: The Law and Technology / Some Observations about Evidence in the Electronic Age
Reading Time: 4 minutes 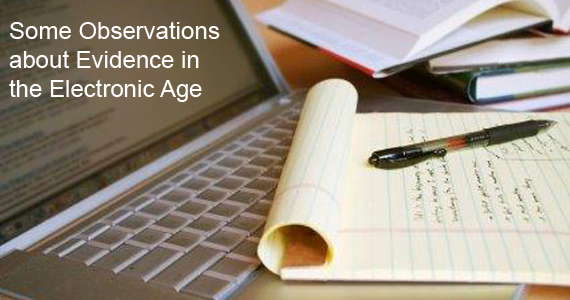 This Court of Appeal decision concerns a dispute over the performance of a contract. Terranova retained Kon Construction to grade lands for residential development. The work was to be done in 2005 but was delayed into 2006 and the agreement went sour. Kon Construction The laws of evidence must adapt to accommodate the current reality of record management filed a claim for unpaid invoices and Terranova counterclaimed that Kon Construction breached the agreement on a number of grounds thereby allowing it to retain another firm to complete the grading work. At trial Madam Justice B.A.Brown ruled that Terranova did not have grounds to terminate its contract with Kon Construction and was therefore liable for a portion of the unpaid invoices which she found had been improperly inflated (Kon Construction v Terranova Development, 2014 ABQB 256). The issues on appeal were primarily on the admissibility of certain electronic records.

Under the contract Kon Construction was to be paid on the basis of earth moved in the grading work. The evidence in dispute here was entries and calculations made by site surveyors to measure the amount of work completed. Terranova argued these electronic records were inadmissible because they consist of expert evidence which was not properly admitted through a qualified expert (at paras 11 and 12). The Court rejects both of these arguments, and in doing makes some remarks on electronic records and expert evidence. The Court makes reference to some law with respect to qualifying expert witnesses (at paras 30 to 43), which I do not comment on here. Terranova also argued the records are inadmissible as hearsay because the raw data was entered by surveyors who did not testify to its accuracy, and the Court rejects this argument on the business records exception to the hearsay rule (at para 49).

Evidentiary issues is not an area of law that I spend much time with, but the reason this decision caught my attention is because I do think about how the computer age – and the capability of the internet in particular – is affecting how we make and practice law. The Court of Appeal makes some brief remarks in this regard as it relates to electronic evidence:

The electronic age has affected many aspects of society and business, and has had a particular impact on record creation and management. Information gathering is increasingly automated, and record keeping is now commonly done in electronic format. This appeal requires an examination of the effect of electronic record management on the laws of evidence, which were formulated on different assumptions about how records are kept. The laws of evidence must adapt to accommodate the current reality of record management (at para 13).

Electronically generated information is not a new concept for the law – but I do think the capacity of the internet and ever-increasing reliance on computers is stretching these issues into new territory: Consider the proliferation of Facebook or Twitter to communicate, and how email has almost replaced traditional means of information delivery. These mediums have and will continue to require some adjustments to traditional ways in the law.

One issue the Court looks at here is the reliability of mechanically generated records. A primary objective of the law on evidence is to screen out unreliable information. The Court observes that computer-generated records are generally admissible because of an inherent reliability, even though we are unable to precisely examine how the information is generated, and the person seeking to rely on this information does not have to prove the underlying processing technology works. The disputed evidence here consisted of survey Electronically generated information is not a new concept for the law – but I do think the capacity of the internet and ever-increasing reliance on computers is stretching these issues into new territory… data collected by electronic means and compiled in software, and the Court concludes this information easily passes the test for reliability (at paras 17 – 19).

Terranova also argued the compilation of information constitutes expert opinion and was not provided by a qualified expert. The admissibility of expert opinion evidence is a noted exception to the principle that opinions are generally not admissible (at para 21). The Court observes that the interpretation of computer-generated information may constitute expert opinion and require a properly qualified expert, but not in every instance. Certain programs are sufficiently routine or within common-usage such that the interpretation of information generated does not require specialized training or knowledge – the Court gives Excel as an example:

An example of a software program that does not usually rise to the level of “opinion”, for the purposes of the law of evidence, is the commonly used data spreadsheet program Microsoft Excel. That program is specifically designed to record raw data in rows and columns. The program can then be told to automatically organize (alphabetically, by date, etc.) and process that data (add, subtract, multiply, divide, etc.). It can also be told to isolate out data by characteristics (by date, amount, or other ascribed characteristic). The ordinary use of arithmetic formulas, and sorting of data by type, does not require “specialized knowledge”; just because a computer can do it faster does not change its categorization as evidence. Many people use Microsoft Excel, but few could actually describe how it works or what it is doing to the data. Few users could actually explain why the data are reliable, yet the results it produces are routinely relied on. That is because the program has been designed, tested, and used so repeatedly that it has been shown to be inherently reliable. The results from such a program are not “opinion evidence”, and they do not require introduction by an expert: R v George (1993), 146 AR 107 at para 34, 14 Alta LR (3d) 106 (PC) (at para 23).

The line where information generated by software crosses into the realm of expert opinion is drawn on a case-by-case basis, and in the Court’s words “[t]here is no automatic or universal rule that computer-generated reports are inadmissible hearsay, or only admissible through expert evidence” (at para 25). The Court rules that the records here did not require specialized knowledge to interpret and pass the test for reliability (at para 29).

Shaun Fluker is an Associate Professor of Law at the University of Calgary in Calgary, Alberta.