A Website of The Centre for Public Legal Education Alberta
You are here: Home / Special Report / 43-3: Emergencies and the Law / The Evolution of the War Measures Act
Reading Time: 6 minutes 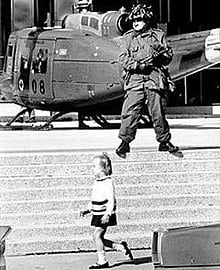 “We are living in extraordinary times,” opined Anglin J in Re Gray (1918) 57 SCR 150, “which necessitate the taking of extraordinary measures.” It was 1918, the final year of the First World War, and the extraordinary measures at issue were powers exercised by the government pursuant to the federal War Measures Act, 1914 (5 George V, c. 2) cancelling Mr Gray’s exemption from military service and resulting in his arrest for refusing to report for duty. The War Measures Act set out Canada’s initial legislative framework on emergencies, and Mr Gray found himself unsuccessful challenging the government’s exercise of the sweeping powers granted under the Act. Despite its generally limited use, the War Measures Act‘s invocation over the years has been highly controversial and reflects some of the darker episodes in Canadian history.

..the history of the War Measures Act illustrates the dangers of having unfettered and unchecked executive power and derogation from the constitutional order. By virtue of Canada’s status as a dominion in the British Empire, Great Britain’s entry into the war on August 4, 1914 also resulted in a state of war existing between Canada and Germany. Within weeks, the War Measures Act passed quickly through Parliament with widespread support and was adopted on August 22, 1914. The Act applied “during war, invasion, or insurrection, real or apprehended” and the powers it conferred on the government (via the authority of the Governor in Council) were incredibly wide in scope. Section 6 of the Act gave the government the power to:

“[…] do and authorize such acts and things, and to make from time to time such orders and regulations, as he may by reason of the existence of real or apprehended war, invasion or insurrection deem necessary or advisable for the security, defence, peace order and welfare of Canada.”

This included, but was not limited to:

In just a couple of short paragraphs, the Act delegated powers normally exercised by the federal Parliament, with all its in-built means of scrutiny and review, to the executive, or cabinet. It also affected the constitutional division of powers between the federal and provincial branches of government: certain enumerated powers (such property and civil rights) within the purview of the provinces were effectively transferred to the federal government. This concentration of power resulted in what some term a “constitutional dictatorship” for the period during which the state of emergency continued to exist.

The extensive powers under the War Measures Act were significantly curtailed in 1988 when the War Measures Act was repealed and replaced by the Emergencies Act, which remains in force to this day.The Act has been invoked three times in Canadian history: during the First World War, the Second World War, and the October Crisis in 1970. The wartime measures took their toll on civil liberties, with widespread censorship of the media and written publications and the arrest and detention of individuals without due process. Perhaps the most capricious and arbitrary exercise of the powers under the Act was the treatment of suspected “enemy aliens” and the suspension of habeas corpus. During the First World War, the government targeted “enemy aliens”, among which were thousands of Ukrainian descent who, having moved to Canada to find work and build a new life, were interned in camps and forced to work on labour projects across the country. Others hailed from other parts of the German and Austro-Hungarian empires and were similarly detained.

Conditions during the Second World War were no better. The federal government passed the Defence of Canada Regulations in 1939 pursuant to the War Measures Act, which led to restrictions on free speech and the detention of those who were considered to act “in any manner prejudicial to the public safety or the safety of the state.”  Notably, Japanese immigrants became a particular target with the breakout of war on the Pacific front. Their property was confiscated, expelled from their homes and forcibly relocated to internment camps. Despite being Canadian citizens, a significant number were deported to Japan.

The exercise of a number of these wartime powers was challenged in the courts. However, in successive decisions (Chemicals Reference [1943] SCR 1; Reference Re Persons of Japanese Race [1950] SCR 124), the Supreme Court of Canada determined that the government’s actions were intra vires, or within its powers. In the Chemicals Reference, the Court considered that the War Measures Act effectively provided the executive branch of government with law-making powers equivalent to the authority vested in Parliament.  When the Japanese Persons Reference was appealed to the Judicial Committee of the Privy Council, Lord Wright considered that in a state of emergency,

Therefore, in the view of their Lordships, the government, to whom Parliament had delegated its powers, had significantly wide latitude in the measures it chose to take and, as a matter of statutory construction of the Act, this included the power to deport individuals (even of Canadian or British nationality) or strip them of their status.

Notably, Japanese immigrants became a particular target with the breakout of war on the Pacific front.The final use of the War Measures Act was also highly controversial, not least because it was invoked during peacetime. On October 5, 1970, the British Minister of Trade James Cross was kidnapped by the Front de libération du Quebec (FLQ), a radical separatist group. A few days later on October 10, Pierre Laporte, the Deputy Premier of Quebec was also kidnapped and subsequently killed.  At the request of the Premier of Quebec, the federal government led by Prime Minister Pierre Elliott Trudeau invoked the War Measures Act on the grounds of an “apprehended insurrection”. This resulted in the subsequent arrest of hundreds of individuals, from suspected FLQ members, to students, union members, and many others. Perhaps one of the immortal moments of Canadian political history was born from the affair. Tim Ralfe, a CBC reporter, asked the Prime Minister how far he would go to keep law and order in society in response to the FLQ’s threats, to which Prime Minister Pierre Elliott Trudeau responded: “Well, just watch me.”

The extensive powers under the War Measures Act were significantly curtailed in 1988 when the War Measures Act was repealed and replaced by the Emergencies Act, which remains in force to this day.  Unlike its predecessor, the Emergencies Act contemplates a greater degree of parliamentary supervision over a declaration of a state of emergency and the ability for Parliament to revoke or extend any such declaration. It is also more prescriptive, with four categories of emergency identified:

and includes an express provision for compensation.

At the request of the Premier of Quebec, the federal government led by Prime Minister Pierre Elliott Trudeau invoked the War Measures Act on the grounds of an “apprehended insurrection”.Significantly, the preamble of the Emergencies Act suggests that any measures are made subject to the Canadian Charter of Rights and Freedoms and the Canadian Bill of Rights.  In this respect, the executive will need to consider whether a suspension of civil rights using powers granted under the Emergencies Act would be reasonable and justified in accordance with s. 1 of the Charter. In addition to the domestic human rights instruments, the Emergencies Act also makes reference to the International Covenant on Civil and Political Rights (ICCPR), which Canada ratified in 1976. The ICCPR itself does recognize that states can, in some instances of emergency, derogate from their treaty obligations, although there are certain “non-derogable rights”, for instance, the right to life, freedom from torture, and freedom from slavery and servitude.

Use of the Emergencies Act is still to be tested and it remains to be seen how any future government will operate within its provisions, and what impact the reference to these human rights instruments (which are not operative provisions but are merely included in the preamble) will have when measures taken under the Act inevitably become subject to judicial scrutiny.

This concentration of power resulted in what some term a “constitutional dictatorship” for the period during which the state of emergency continued to exist.The modern world faces new threats beyond war and insurrection: there is the ever-pressing danger of climate change, threats from cyberspace, home-grown and international terrorism, and economic depression, all of which may well trigger the need for emergency measures in the future. While there is no doubt that some sort of dispensation of the usual order is required in times of emergency, the history of the War Measures Act illustrates the dangers of having unfettered and unchecked executive power and derogation from the constitutional order. To what extent must the interests of the individual submit to the collective interests of the nation? How far do we go in the name of national security and to restore order and peace? These are quintessential dilemmas for any modern state, and the lessons learned from the history of the War Measures Act will certainly need to be considered in developing answers to these questions.